FOR THE PEOPLE, BY THE PEOPLE! Availability of automatic language translation tools Reaching people across geographical, cultural and linguistic boundaries requires translation. 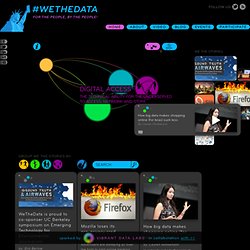 For example, a large proportion of basic information on the web is not accessible to Arab speakers. Sharing and leveraging open data will be limited if there are not tools that enable translation. Beyond the direct and obvious linguistic translation, this may include cultural differences, such as what units are used on data. Internet architecture and the layers principle: a conceptual framework for regulating Bitcoin. Abstract Bitcoin is the first decentralised, peer-to-peer network that allows for the proof and transfer of ownership of virtual currencies without the need for a trusted third party. 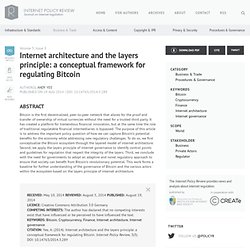 Index. (80) Philosophy in a time of Software – Google Groups. A world run by software. A few days ago I reshared this talk from Balaji Srinivasan, along with my initial comments defending the position against what I took to be a superficial rejection from +David Brin and others. 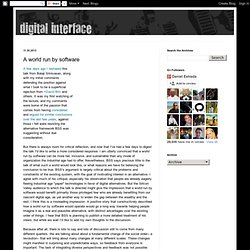 It was my first watching of the lecture, and my comments were borne of the passion that comes from having considered and argued forsimilar conclusionsover the last few years, against those I felt were resisting the alternative framework BSS was suggesting without due consideration. But there is always room for critical reflection, and now that I've had a few days to digest the talk I'd like to write a more considered response. I am utterly convinced that a world run by software can be more fair, inclusive, and sustainable than any mode of organization the industrial age had to offer. 2013-02 Academic Keynote Panel - THE REALITY OF BIG DATA.

Who is building the institutions of the Twenty-First Century ? The pursuit of innovation and value creation through free market competition and entrepreneurial activity has been one of the greatest drivers of human progress to date. 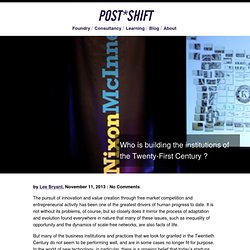 It is not without its problems, of course, but so closely does it mirror the process of adaptation and evolution found everywhere in nature that many of these issues, such as inequality of opportunity and the dynamics of scale-free networks, are also facts of life. Infrastructure: The Social Value of Shared Resources. David Graeber in conversation with Jonathan Conning (better audio) 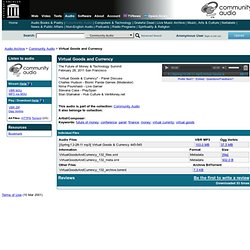 --'--> in-browser audio player requires JavaScript to be enabled. It appears your browser does not have it turned on. Please see your browser settings for this feature. </div> [Spring f 2-28-11 mp3] Virtual Goods & Currency 445-545 The Future of Money & Technology Summit February 28, 2011 San Francisco. Regulators See Value in Bitcoin and Other Digital Currencies. The crypto-currency Bitcoin gained some valuable—and surprising—new allies at a U.S. 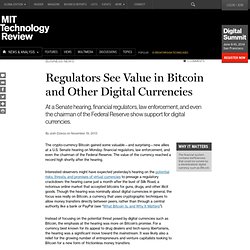 Senate hearing on Monday: financial regulators, law enforcement, and even the chairman of the Federal Reserve. The value of the currency reached a record high shortly after the hearing. Interested observers might have expected yesterday’s hearing on the potential risks, threats, and promises of virtual currencies to presage a regulatory crackdown: the hearing came just a month after the bust of Silk Road, a notorious online market that accepted bitcoins for guns, drugs, and other illicit goods.

Though the hearing was nominally about digital currencies in general, the focus was really on Bitcoin, a currency that uses cryptographic techniques to allow money transfers directly between peers, rather than through a central authority like a bank or PayPal (see “What Bitcoin Is, and Why It Matters”). Why Valve? - Yanis Varoufakis. Or, what do we need corporations for and how does Valve’s management structure fit into today’s corporate world? 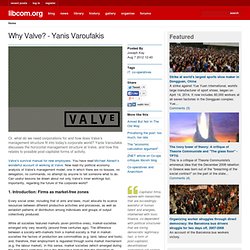 Yanis Varoufakis discusses the horizontal management structure at Valve, and how this relates to possible post-capitalist forms of activity. Valve’s survival manual for new employees. The Cognitive Limit of Organizations. This is a slide that I got from Cesar Hidalgo. 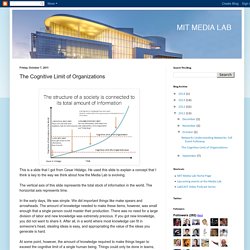 He used this slide to explain a concept that I think is key to the way we think about how the Media Lab is evolving. The vertical axis of this slide represents the total stock of information in the world. The horizontal axis represents time. In the early days, life was simple. Australia’s Move to Fiber-to-the-Neighborhood Service Provokes Defense of Copper Network. The Australian government’s proposal to launch a nationwide fiber to the home National Broadband Network (NBN) has been scrapped by the more conservative Liberal-National Coalition that replaced the Labor government in a recent election. 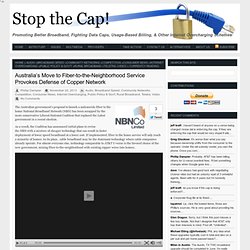 As a result, the Coalition has announced initial plans to revise the NBN with a mixture of cheaper technology that can result in faster deployment of lower speed broadband at a lower cost. If implemented, fiber to the home service will only reach a minority of homes. In its place, cable broadband may be the dominant technology where cable companies already operate. Designing Effective Knowledge Networks. News Use Across Social Media Platforms. How do different social networking websites stack up when it comes to news? 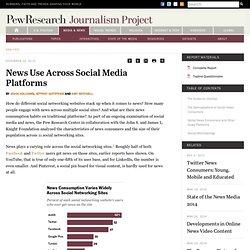 How many people engage with news across multiple social sites? And what are their news consumption habits on traditional platforms? Bitcoin Fireside Chat with Marc Andreessen and Balaji Srinivasan - Coinsumm.it. One-third of U.S. adults get news through Facebook: study. The Future of News from 3 Silicon Valley Executives. Mike Moritz, Eric Schmidt and Chris Cox discuss the digital news industry for Harvard's Nieman Journalism Lab In a world transformed by the Internet and overrun by tech giants, the news industry has been irrevocably changed. Some lament, but few would argue. Those on the news side of things have been vocal for some time – analyzing and brainstorming, discussing and arguing – but we’ve not often heard what those behind the flourishing tech companies have to say.

Three notable Silicon Valley figures discussed the news industry with Riptide, a project headed by John Huey, Martin Nisenholtz and Paul Sagan and published by Harvard’s Nieman Journalism Lab. Sousveillance Turns the Tables on the Surveillance State. Narrative ClipThe Narrative Clip is a digital camera about the size of a postage stamp that clips to one’s breast pocket or shirt collar and takes a photo every thirty seconds of whatever one’s seeing. The photos are uploaded to the cloud and can be accessed on demand with a smartphone app, making it easy to look up any moment in one’s life. When the project to mass-produce these cameras first hit Kickstarter, I knew I had to have one, and with any luck mine will be arriving in a couple of weeks.

The prospect of having a complete photographic record of my life is compelling for many reasons. I have a terrible memory, especially for faces, so it will be interesting to see if this device can help. There are also moments in life that would be great to relive, but that one can’t–or one doesn’t know one should–be photographing. James Surowiecki: Valuing the Free Digital Economy.

Twitter’s recent I.P.O. bonanza gave us all some striking numbers to consider. There’s the company’s valuation: an astounding twenty-four billion dollars. And its revenue: just five hundred and thirty-five million. It has more than two hundred and thirty million active users, and a hundred million of them use the service daily.

They collectively send roughly half a billion tweets every day. Facebook Has Transformed My Students' Writing—for the Better - Andrew Simmons. UK data capability strategy: seizing the data opportunity - Publications. Government strategy, produced in partnership with industry and academia, that sets direction and leadership for UK data capability. This includes several aspects: human capital: a skilled workforce, and data-confident citizens the tools and infrastructure which are available to store and analyse data data as an enabler: the ability of consumers, businesses and academia to access and share data appropriately This strategy includes measures to: build capability in the commercial, academic and public sector strengthen skills focused at schools, higher and further education continue professional development ensure that the UK’s infrastructure and R&D environment supports improved data capability.

Human Smart Cities » Human Smart Cities Manifesto. 4-D Printing Means Building Things That Build Themselves. In our Weekly Innovation series, we pick an interesting idea, design or product that you may not have heard of yet. Got an innovation you think we should feature? Fill out our form. Johanna Blakely: Lessons from fashion's free culture. Why is broadband more expensive in the US? 27 October 2013Last updated at 20:55 ET By Tom Geoghegan BBC News, Washington. Academics back students in protests against economics teaching. A prominent group of academic economists have backed student protests against neo-classical economics teaching, increasing the pressure on top universities to reform courses that critics argue are dominated by free market theories that ignore the impact of financial crises. Hyperemployment, or the Exhausting Work of the Technology User - Ian Bogost.

In 1930, the economist John Maynard Keynes famously argued that by the time a century had passed, developed societies would be able to replace work with leisure thanks to widespread wealth and surplus. Jim Gee Principles on Gaming. How Social Robotics is Revolutionising Therapy for Autistic Children. Rise of the Robot Artist. David Kelley: How to build your creative confidence. Neurogaming: What's Neuroscience and Ethics Got To Do With It? - Exploring Ethics. Government calls for more data scientists in the UK. The government is calling on industry and academia to help produce more data scientists in the UK. Intense competition for new ‘42’ IT start-up academy.