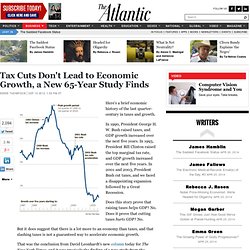 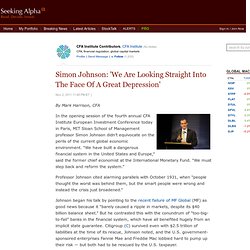 “We have built a dangerous financial system in the United States and Europe,” said the former chief economist at the International Monetary Fund. “We must step back and reform the system.” Professor Johnson cited alarming parallels with October 1931, when “people thought the worst was behind them, but the smart people were wrong and instead the crisis just broadened.” Johnson began his talk by pointing to the recent failure of MF Global (MF) as good news because it “barely caused a ripple in markets, despite its $40 billion balance sheet.” Johnson says these large institutions get a 50 basis point benefit on their debt costs from the implicit U.S. government guarantee.

The Wrong Worries. The Road to Economic Crisis Is Paved With Euros. THERE’S SOMETHING peculiarly apt about the fact that the current European crisis began in . 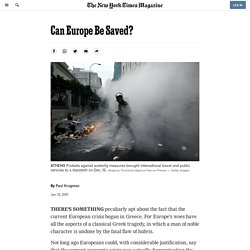 For ’s woes have all the aspects of a classical Greek tragedy, in which a man of noble character is undone by the fatal flaw of hubris. Not long ago Europeans could, with considerable justification, say that the current economic crisis was actually demonstrating the advantages of their economic and social model. Like the , Europe suffered a severe slump in the wake of the global financial meltdown; but the human costs of that slump seemed far less in Europe than in . In much of Europe, rules governing worker firing helped limit job loss, while strong social-welfare programs ensured that even the jobless retained their health care and received a basic income. Europe’s might have fallen as much as ours, but the Europeans weren’t suffering anything like the same amount of misery. Innovation Kills Monopolies Faster Than Governments Can: Tech News and Analysis. 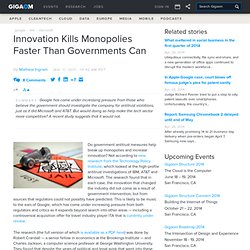 Not according to new research from the Technology Policy Institute, which looked at the high-profile antitrust investigations of IBM, AT&T and Microsoft. The research found that in each case, the innovation that changed the industry did not come as a result of government intervention, but from sources that regulators could not possibly have predicted. This is likely to be music to the ears of Google, which has come under increasing pressure from both regulators and critics as it expands beyond search into other areas — including a controversial acquisition offer for travel industry player ITA that is currently under review.

The research (the full version of which is available as a PDF here) was done by Robert Crandall — a senior fellow in economics at the Brookings Institute — and Charles Jackson, a computer science professor at George Washington University. IBM. La polémique Goldman Sachs. ECONOMY. The Future of Money. FMI ou pas FMI ? The economics of Open Source. 9 Things The Rich Don't Want You To Know About Taxes. For three decades we have conducted a massive economic experiment, testing a theory known as supply-side economics. 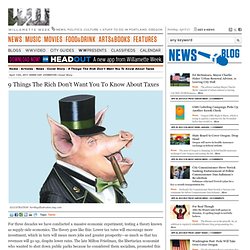 The theory goes like this: Lower tax rates will encourage more investment, which in turn will mean more jobs and greater prosperity—so much so that tax revenues will go up, despite lower rates. The late Milton Friedman, the libertarian economist who wanted to shut down public parks because he considered them socialism, promoted this strategy. Ronald Reagan embraced Friedman’s ideas and made them into policy when he was elected president in 1980. For the past decade, we have doubled down on this theory of supply-side economics with the tax cuts sponsored by President George W.

Bush in 2001 and 2003, which President Obama has agreed to continue for two years. You would think that whether this grand experiment worked would be settled after three decades. Tax policy is something the framers left to politics. 1. Credits: WW CHART — SOURCE: MEDICARE TAX DATABASE; CENSUS 2. 3.