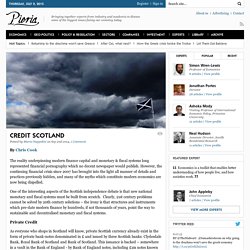 However, the continuing financial crisis since 2007 has brought into the light all manner of details and practices previously hidden, and many of the myths which constitute modern economics are now being dispelled. One of the interesting aspects of the Scottish independence debate is that new national monetary and fiscal systems must be built from scratch. Clearly, 21st century problems cannot be solved by 20th century solutions – the irony is that structures and instruments which pre-date modern finance by hundreds, if not thousands of years, point the way to sustainable and decentralised monetary and fiscal systems. Private Credit But most modern money in existence in Scotland does not consist of paper currency, but rather consists of accounting entries in banking systems which are denominated in £ symbols.

Oil. Financial Times - An Independent Scotland will be better off from Day 1. Scotland ahead of rUK even without oil says Credit Suisse report. 10 reasons why an independent Scotland’s economy will be stronger without Westminster : Business for Scotland. The evidence is clear that Scotland is one of the world’s wealthiest countries. 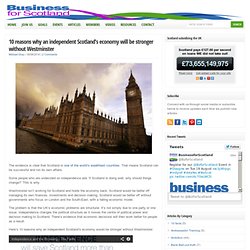 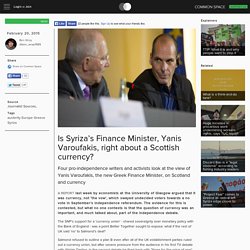 The evidence for this is contested, but what no one contests is that the question of currency was an important, and much talked about, part of the independence debate. The SNP’s support for a ‘currency union’ - shared sovereignty over monetary policy with the Bank of England - was a point Better Together sought to expose: what if the rest of UK said ‘no’ to Salmond’s deal? Salmond was widely considered to have won that debate, and with that the currency union faded from the media’s focus in the final two weeks as polls tightened and attention instead turned to which powers Gordon Brown had begun promising. Our Scottish notes are an advantage. The SNP knows this. Treasury pockets £345m thanks to Scottish policies.

Paul Krugman, what the heck? It is the UK’s parlous position, that is giving financial markets their ongoing jitters, not Scotland’s economic prospects argues James Meadway. 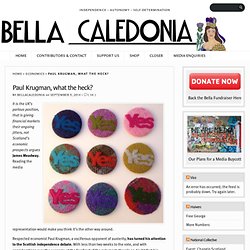 Reading the media representation would make you think it’s the other way around. Respected economist Paul Krugman, a vociferous opponent of austerity, has turned his attention to the Scottish independence debate. The Purging of Scottish Madness. When the banks fail again, as they surely will, they will fail in London. 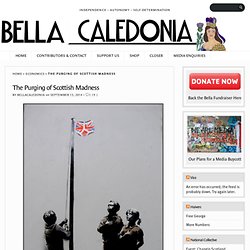 Relocation is a good, not a bad thing for Scottish financial security. By Ciaran Healy. Credit Scotland. Food prices could fall in independent Scotland says supermarket giant. Tuesday, 10 December 2013 07:06 By Martin Kelly Claims that supermarkets are planning to increase food prices if Scotland votes Yes in the independence referendum have been dismissed by one of the big four supermarket giants. 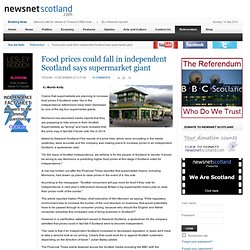 Morrisons has described media reports that they are preparing to hike prices in their Scottish Supermarkets as "wrong" and have revealed that the price may in fact fall if Scots vote Yes in 2014. Asked by Newsnet Scotland if the reports of a price hike, which were circulating in the media yesterday, were accurate and the company was making plans to increase prices in an independent Scotland, a spokesman said: "On the issue of Scottish independence, we believe is for the people of Scotland to decide.

It would be wrong to say Morrisons is predicting higher food prices at this stage if Scotland voted for independence. " "Our view is that if an independent Scotland increased or decreased regulation or taxes we'd have to take a second look at our pricing. Banks' moves are a credit and not a debit in Yes camp accounts. RBS's plan to move its head office nameplate from Edinburgh to London in the event of a Yes vote should ensure that the Bank of England will remain its lender of last resort, and that a Westminster government would have to stump up the capital if another financial crisis prompted a need for a new bail-out. 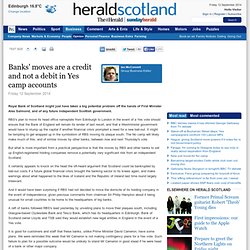 It might be tempting to get wrapped up in the symbolism of RBS moving its plaque south. The No camp will likely make much of this, and of similar moves by other banks, between now and next Thursday's vote. But what is more important from a practical perspective is that the moves by RBS and other banks to set up English-registered holding companies remove a potentially very significant risk from an independent Scotland. A raft of banks followed RBS's lead yesterday by unveiling plans to move their plaques south, including Glasgow-based Clydesdale Bank and Tesco Bank, which has its headquarters in Edinburgh. Scottish independence, UK dependency.

September 4, 2014 // By: James Meadway Something has rattled the City of London this week. 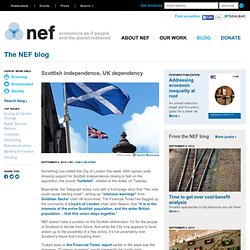 With opinion polls showing support for Scottish independence closing in fast on the opposition, the pound “tumbled”, relative to the dollar, on Tuesday. Meanwhile, the Telegraph today runs with a front-page story that “Yes vote could cause sterling crash”, writing up “ominous warnings” from Goldman Sachs’ chief UK economist. 5 biggest No Campaign Economics Scare Stories Debunked. The people of Scotland are making an important decision on September 18th. 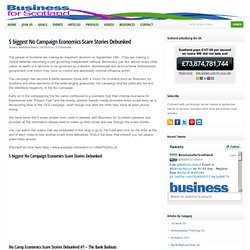 They are making a choice between becoming a self governing independent national democracy just like almost every other nation on earth or a decision to be governed by a distant, disinterested and dysfunctional Westminster government over which they have no control and absolutely minimal influence within. The campaign has become a battle between those with a Vision for Scotland such as Business for Scotland and other elements of the wide-ranging grassroots Yes campaign and the politically led and the relentless negativity of the No Campaign. Early on in the campaigning the No camp confessed to a journalist that their internal nickname for themselves was “Project Fear” and the mostly unionist friendly media promotes every scare story as a devastating blow to the YES campaign, even though one after the other they have all been proven wrong. iPhone/iPad click here.

Enough of the Scottish subsidy myth &#12288; The Panama principle. This week it has been claimed that independence could leave homeowners facing a rise in mortgage rates. 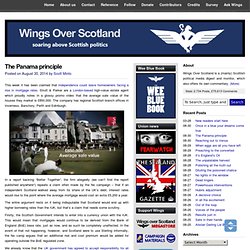 Strutt & Parker are a London-based high-value estate agent which proudly notes in a glossy promo video that the average sale value of the houses they market is £850,000. The company has regional Scottish branch offices in Inverness, Banchory, Perth and Edinburgh. In a report backing “Better Together”, the firm allegedly (we can’t find the report published anywhere*) repeats a claim often made by the No campaign – that if an independent Scotland walked away from its share of the UK’s debt, interest rates would rise to the point where the average mortgage would cost an extra £5,200 a year.

(It is likely that…) Independence will bring a bigger dividend than even the Yes campaign predict. Posted by Euan Bennet on 26/08/2014. A Currency Solution for Scotland - WSJ. Expert Economist moves from Devo Plus to Yes. Sir Donald Mackay backs economic case for Yes. First Minister Alex Salmond has welcomed new analysis of Scotland’s oil and gas reserves by Professor Sir Donald Mackay - former chairman of Scottish Enterprise and former Economic Adviser to the Secretary of State for Scotland – who sets out why the UK Government’s Office of Budget Responsibility is “precisely wrong” and “hopelessly at sea”.

Speaking on BBC Radio Scotland this morning he also made clear why an independent Scotland will be in a better financial position than the rest of the UK and that the Scottish Government’s proposals are “perfectly sensible”. Sir Donald also made clear that he favours a currency union as it is in the interests of both Scotland and the rest of the UK and that he is now backing independence as "I didn’t believe that the other parties would ever deliver anything akin to Home Rule. " Sir Donald set out his analysis in a letter to the First Minister. Commenting, First Minister Alex Salmond, said: Dear First Minister, No campaign blow as Bank of England Chief confirms indy contingency plans in place.

General Wednesday, 13 August 2014 16:24 By Martin Kelly The Governor of the Bank of England has confirmed that there are contingency plans in place should Scotland become independent. In a carefully worded announcement today, Mark Carney said: "It's never good to talk about contingency plans in public other than to assure that we have contingency plans," The BoE Chief added: "In terms of our responsibilities for financial stability - we have a wide range of tools and plans. " Mr Carney's remarks are believed to be aimed at easing concerns inside the financial markets over worries should Scots vote Yes in September. Why an independent Scotland could become the richest country on Earth - Comment - Voices. An independent Scotland could become the richest country on earth. I’m not joking.

It has all the necessary ingredients. Let me explain. Scottish independence: Prof Patrick Dunleavy says Treasury claims 'ludicrous' DWP refuses to respond to MSP concerns on welfare. Independence debate: Yes, Scotland? - FT.com. Unleashing a firestorm. A Letter to the First Minister : Wealthy Nation. We are delighted to welcome Professor Donald Mackay as a contributor among the distinguished economists who write for WN and explain why Scots should vote Yes on September 18.

This letter is from Professor Sir Donald Mackay, a leading expert on North Sea oil and gas ever since they came onstream in the 1970s. (1) Leading economist and former Standard Life Chief... - Eu Citizens for an Independent Scotland. Westminster charges Scotland billions of pounds in service costs. Timeline Photos - Eu Citizens for an Independent Scotland.

Scottish independence: opportunities for the legal profession. Business for Scotland submits evidence to Holyrood Economy Committee. On 31st January 2014, Business for Scotland submitted this evidence to the Scottish Parliament’s Economy, Energy and Tourism Committee on Scotland’s Economic Future Post-2014. Submitted by Gordon MacIntyre-Kemp, CEO, Business for Scotland; 10 key economic facts that prove Scotland will be a wealthy independent nation. The historical debt. Scotland: Destroying Darling's Bank Bail-out Myth. Over and over again we hear from anti-independence campaigers (especially failed former Chancellor Alastair Darling) that an independent Scotland could not have afforded to bail out the Scottish banks. After all, Alastair knows best! He was in charge when they collapsed!