Strategies for Two-Sided Markets. The Idea in Brief If you listed the blockbuster offerings that have redefined the global business landscape, you’d find that many tie together two distinct groups of users. 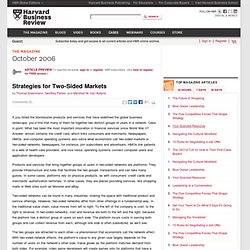 HMOs, for instance, link patients to health-care providers. Search engines join Web surfers and advertisers. When successful, these platforms catalyze a virtuous cycle: More demand from one user group spurs more from the other. For example, the more video games developers (one user group) create for the Microsoft X-Box platform, the more players (the other user group) snap up the latest X-Box. But as Eisenmann, Parker, and Van Alstyne contend, managing platforms is tricky: Strategies that make traditional offerings successful won’t work in these two-sided markets. The key challenge? If you seize a platform opportunity but don’t get it right the first time, someone else will. The Idea in Practice To ensure your platform’s success: Get Pricing Right Consider these pricing strategies: Economists the new hot job category for Silicon Valley tech companies. By Mike Swift mswift@mercurynews.com Posted: 11/22/2010 12:01:00 AM PST0 Comments|Updated: 3 years ago In addition to software engineers, computer scientists and Web designers, Silicon Valley giants ranging from Yahoo to Google to eBay are scrambling to hire economists, little-known and increasingly valuable weapons as these companies create new businesses and fine-tune existing ones.

In the wake of the example of UC Berkeley economist Hal Varian, who helped Google perfect the auction process behind its multibillion-dollar search advertising revenue stream, big Internet companies are competing to woo economists away from universities or work with them on specific projects. Yahoo has been among the most aggressive, but eBay, Amazon.com, Facebook and other companies also are recruiting practitioners of what used to be called "the dismal science. 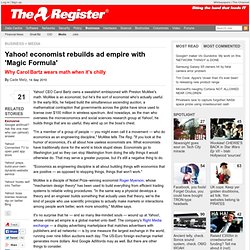 CEO Carol Bartz owns a sweatshirt emblazoned with Preston McAfee's math. McAfee is an economist, but he's the sort of economist who's actually useful. In the early-90s, he helped build the simultaneous ascending auction, a mathematical contraption that governments across the globe have since used to license over $100 million in wireless spectrum. And nowadays, as the man who oversees the microeconomics and social sciences research group at Yahoo! , he builds things that are so useful, they wind up on the boss's chest. "I'm a member of a group of people — you might even call it a movement — who do economics as an engineering discipline," McAfee tells The Reg.

"Economics as engineering discipline is all about building things with economics that are positive — as opposed to stopping things, things that won't work. " It's no surprise that he — and so many like-minded souls — wound up at Yahoo! "It's not an accident that I and many other [economic engineers] are here," McAfee says. Towards a Value-Added User Data Economy. Every week it seems like the debate over access to, portability of and privacy over user data on the social web has reached new heights. 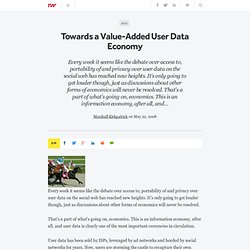 It's only going to get louder though, just as discussions about other forms of economics will never be resolved. That's a part of what's going on, economics. This is an information economy, after all, and user data is clearly one of the most important currencies in circulation. User data has been sold by ISPs, leveraged by ad networks and horded by social networks for years. Now, users are storming the castle to recapture their own booty.

The Importance of Privacy Facebook holds a growing amount of user data and tries to hold on to it tightly in the name of user privacy. High profile blogger Robert Scoble teamed up with spamtastic startup Plaxo to scrape the emails from his contacts' profiles in Facebook, turn them from protected images into machine readable text with OCR technology and then export them outside of Facebook. Long Term Interests. Techonomics. Network effect. Diagram showing the network effect in a few simple phone networks. 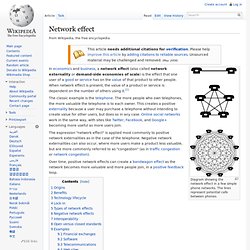 The lines represent potential calls between phones. The classic example is the telephone. The more people who own telephones, the more valuable the telephone is to each owner. This creates a positive externality because a user may purchase a telephone without intending to create value for other users, but does so in any case. Online social networks work in the same way, with sites like Twitter, Facebook, and Google+ becoming more useful as more users join.

The expression "network effect" is applied most commonly to positive network externalities as in the case of the telephone. Over time, positive network effects can create a bandwagon effect as the network becomes more valuable and more people join, in a positive feedback loop. Origins[edit] Network effects were a central theme in the arguments of Theodore Vail, the first post patent president of Bell Telephone, in gaining a monopoly on US telephone services. SNAPSHOT: Here's (Almost) Everybody That Works At Foursquare.