The Sharing Economy. Something Economy: seems like a popular trend – stick a word in front of economy and use it to describe the next big thing. 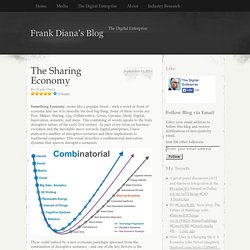 Some of these words are: Peer, Maker, Sharing, Gig, Collaborative, Green, Circular, Mesh, Digital, Innovation, semantic, and more. This combining of words speaks to the truly disruptive nature of the early 21st century. As part of my focus on business evolution and the inevitable move towards digital enterprises, I have analyzed a number of disruptive scenarios and their implications to traditional companies. This visual describes a combinatorial innovation dynamic that spawns disruptive scenarios: There could indeed be a new economic paradigm spawned from the combination of disruptive scenarios – and one of the key drivers is the sharing or collaborative economy.

In this piece on Workers in the Sharing Economy, the author argues that the rise of labor marketplaces is attributed to the lack of stable employment driving people to pursue ad hoc tasks. Evgeny vs. the internet. Heidegger in Silicon Valley: technology and the hacker way. ‘Software is eating the world!’ 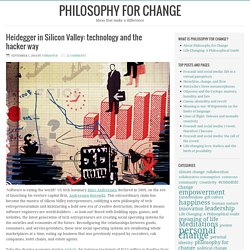 US tech luminary Marc Andreessen declared in 2009, on the eve of launching his venture capital firm, Andreessen-Horowitz. This extraordinary claim has become the mantra of Silicon Valley entrepreneurs, codifying a new philosophy of tech entrepreneurialism and kickstarting a bold new era of creative destruction. Decoded it means: software engineers are world-builders – so look out! Bored with building apps, games, and websites, the latest generation of tech entrepreneurs are creating social operating systems for the societies and economies of the future. Brave New Geek. Last year, Airbnb hosted more than four million guests around the world. 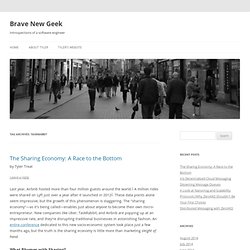 A million rides were shared on Lyft just over a year after it launched in 2012. These data points alone seem impressive, but the growth of this phenomenon is staggering. The "sharing economy"—as it's being called—enables just about anyone to become their own micro-entrepreneur. New companies like Uber, TaskRabbit, and Airbnb are popping up at an impressive rate, and they're disrupting traditional businesses in astonishing fashion. An entire conference dedicated to this new socio-economic system took place just a few months ago, but the truth is the sharing economy is little more than marketing sleight of hand.

Yelp Adds Booking Home Services Online With ReachLocal. If you’re looking to find home services ranging from movers to interior designers, you’ll be able to do it all on Yelp by the end of the year. 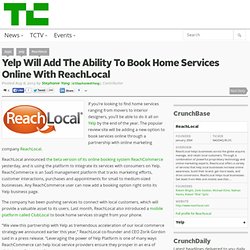 The popular review site will be adding a new option to book services online through a partnership with online marketing company ReachLocal. ReachLocal announced the beta version of its online booking system ReachCommerce yesterday, and is using the platform to integrate its services with consumers on Yelp. ReachCommerce is an SaaS management platform that tracks marketing efforts, customer interactions, purchases and appointments for small to medium-sized businesses. Any ReachCommerce user can now add a booking option right onto its Yelp business page. The company has been pushing services to connect with local customers, which will provide a valuable asset to its users.

With a monthly average of 108 million unique visitors in Q2 2013, Yelp is a huge step for ReachLocal trying to increase business for its users. TaskRabbit Confession. TaskRabbit is a hot startup that everyone is buzzing about. 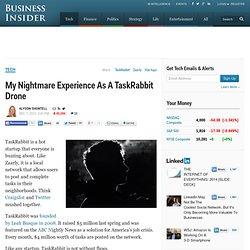 Like Zaarly, it is a local network that allows users to post and complete tasks in their neighborhoods. Think Craigslist and Twitter mushed together. TaskRabbit was founded by Leah Busque in 2008. It raised $5 million last spring and was featured on the ABC Nightly News as a solution for America's job crisis. Every month, $4 million worth of tasks are posted on the network. The scary new labormetrics of work. Matt Crampton is pushing back against my charge that his company, Gigwalk, is contributing to class stratification in the United States. 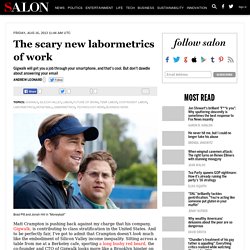 And to be perfectly fair, I’ve got to admit that Crampton doesn’t look much like the embodiment of Silicon Valley income inequality. Sitting across a table from me at a Berkeley cafe, sporting a long bushy red beard, the co-founder and CTO of Gigwalk looks more like a Brooklyn hipster on his way to Burning Man than a paradigm-busting pioneer on the new frontier of work. “We are creating kinds of work that have never existed before,” says Crampton. “The average person who downloads our app is finding work that they just wouldn’t have had access to previously.” He makes a provocative case. For example: Suppose PepsiCo wants to make sure that its promotional displays are properly set up at grocery stores around the country. That’s interesting. The scary new labormetrics of work.

The Task Rabbit Economy. TaskRabbit.com markets itself as a Web service that matches clients seeking someone to do odd jobs with “college students, recent retirees, stay-at-home moms, [and] young professionals” looking for extra income. 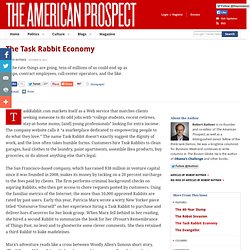 The company website calls it “a marketplace dedicated to empowering people to do what they love.” The name Task Rabbit doesn’t exactly suggest the dignity of work, and the love often takes humble forms. Customers hire Task Rabbits to clean garages, haul clothes to the laundry, paint apartments, assemble Ikea products, buy groceries, or do almost anything else that’s legal. The San Francisco–based company, which has raised $38 million in venture capital since it was founded in 2008, makes its money by tacking on a 20 percent surcharge to the fees paid by clients.

The firm performs criminal background checks on aspiring Rabbits, who then get access to chore requests posted by customers. The Task Rabbit Economy.