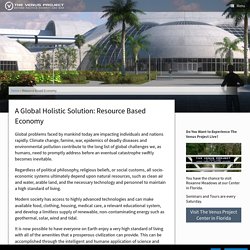 Climate change, famine, war, epidemics of deadly diseases and environmental pollution contribute to the long list of global challenges we, as humans, need to promptly address before an eventual catastrophe swiftly becomes inevitable. Regardless of political philosophy, religious beliefs, or social customs, all socio-economic systems ultimately depend upon natural resources, such as clean air and water, arable land, and the necessary technology and personnel to maintain a high standard of living. Modern society has access to highly advanced technologies and can make available food, clothing, housing, medical care, a relevant educational system, and develop a limitless supply of renewable, non-contaminating energy such as geothermal, solar, wind and tidal. Economie Collaborative. People, Planet, Profit: How Triple-Bottom-Line Businesses Lead the Way Toward Sustainable Economies. Iceland Forgives Entire Population Its Debt and Jails 29 Bankers.

Iceland’s economy was among those hit hardest by the 2008 financial crash, leading to unusually strict treatment of the bankers responsible. 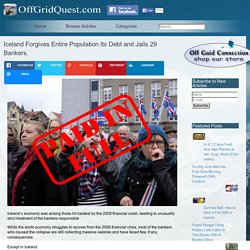 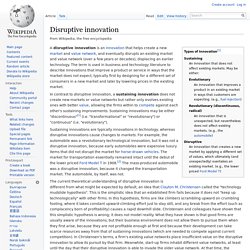 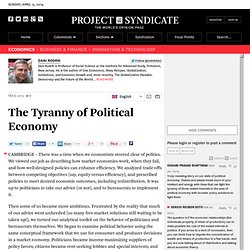 Click to hide this space. Richard Werner: Über die Notwendigkeit einer Reform der Volkswirtschaftslehre. Why Are US Job Numbers Better Than Europe’s? Thank the Deficit! January 9, 2012 | Like this article? 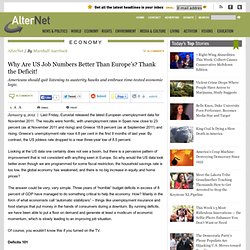 Join our email list: Stay up to date with the latest headlines via email. Last Friday, Eurostat released the latest European unemployment data for November 2011. The results were horrific, with unemployment rates in Spain now close to 23 percent (as at November 2011 and rising) and Greece 18.8 percent (as at September 2011) and rising. Wie man Schulden erfolgreich abbaut. Time for the Fed to take over in Europe. The European Central Bank (ECB) has been working hard to convince the world that it is not competent to act as a central bank. 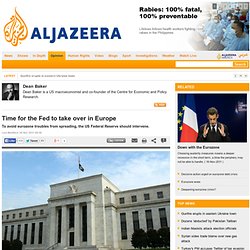 One of the main responsibilities of a central bank is to act as the lender of last resort in a crisis. The ECB is insisting that it will not fill this role. It is arguing instead that it would sooner see the eurozone collapse than risk inflation exceeding its 2.0 per cent target. It would be bad enough if the ECB's incompetence just put Europe's economy at risk. Krugman-oligarchs-and-money. Socially responsible investing. Socially responsible investing (SRI), also known as sustainable, socially conscious, "green" or ethical investing, is any investment strategy which seeks to consider both financial return and social good. 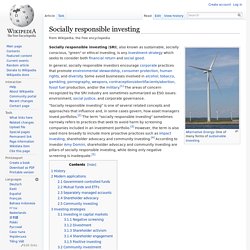 Social Investing: Dein Geld, mein Geld. The Occupy Money Cooperative. How Did Economists Get It So Wrong? The Death of the Confidence Fairy. Conservative fantasies on the miracles of market. Austin, TX - A central doctrine of evangelicals for the "free market" is its capacity for innovation: New ideas, new technologies, new gadgets - all flow not from governments, but from individuals and businesses, allowed to flourish in the market, we are told. 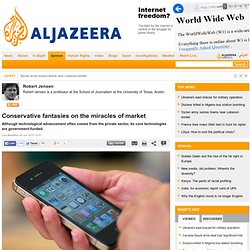 That's the claim made in a recent op-ed in our local paper by policy analyst Josiah Neeley of the Texas Public Policy Foundation, a conservative think-tank in Austin. His conclusion: "Throughout history, technological advances have been driven by private investment, not by government fiat. There is no reason to expect that to change anytime soon. " The wrecking society: Economics today - Opinion. There is an old story from the heyday of the Soviet Union. 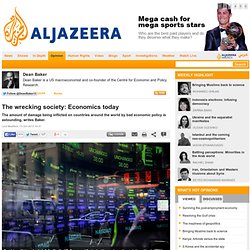 As part of their May Day celebrations they were parading their latest weapon systems down the street in front of the Kremlin. There was a long column of their newest tanks, followed by a row of tractors pulling missiles. Behind these weapons were four pick-up trucks carrying older men in business suits waving to the crowds. Olafur Ragnar Grimsson Iceland president 'Let banks go bankrupt' Our Economic Ruin Means Freedom for the Super-Rich by George Monbiot. The model is dead; long live the model. 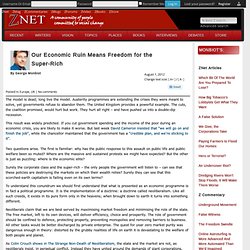 Even in its hey-day, from the early 1980’s until 2007, American-style deregulated capitalism brought greater material well-being only to the very richest in the richest country of the world. Indeed, over the course of this ideology’s 30-year ascendance, most Americans saw their incomes decline or stagnate year after year. Moreover, output growth in the United States was not economically sustainable. Rule by Rentiers. Nor is the Federal Reserve riding to the rescue. On Tuesday, Ben Bernanke, the Fed chairman, acknowledged the grimness of the economic picture but indicated that he will do nothing about it. And debt relief for homeowners — which could have done a lot to promote overall economic recovery — has simply dropped off the agenda.

The existing program for mortgage relief has been a bust, spending only a tiny fraction of the funds allocated, but there seems to be no interest in revamping and restarting the effort. The situation is similar in Europe, but arguably even worse. In particular, the European Central Bank’s hard-money, anti-debt-relief rhetoric makes Mr. Of the 1%, by the 1%, for the 1% The 1% are the very best destroyers of wealth the world has ever seen.