Europe's stranglehold over the IMF has become a curse. Greece is a lesson for the Labour Party: you can’t have your cake and eat it. So Mr Tsipras was almost right in the end: this was a kind of triumph for democracy provided that you understand that the point of electoral politics is to deliver outcomes which the people actually want, as opposed to what they have been persuaded that they want by hot-headed ideologues. 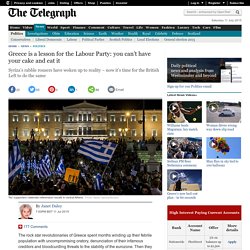 Oddly enough, this principle also has a bearing on our own much less tumultuous political scene. Europe has suffered a reputational catastrophe in Greece. Where this will take him, and take Greece, is anybody’s guess. 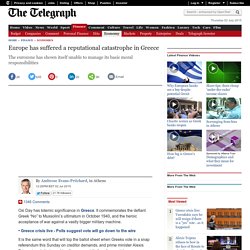 The latest Efimerida ton Syntakton poll shows the “No” side leading by 54pc against 33pc for “yes”. But that lead - if it really exists - may evaporate as the ghastly consequences of financial collapse become clearer by the day. Distraught pensioners have been gathering in small, tense crowds outside banks trying to withdraw their weekly allowance of €120 (£85). Many have not been paid. A throng of veterans protested outside the finance ministry on Wednesday morning, denouncing EU “dictatorship” and Mr Tsipras with equal fury. Alexis Tsipras addresses the Greek nation on Wednesday Ambulances in parts of northern Greece have run out of fuel. If Europe’s creditor powers have succeeded in bringing Greece to its knees, they have paid a fearful price themselves. We can already see that the EU itself has suffered a reputational catastrophe on several fronts.

Let us be clear what this means. If so, they cannot admit it. Why did Europe lurch right? Because the ‘recovery’ is a farce. I was trained as an economist, but that does not mean I think economics determines absolutely everything. 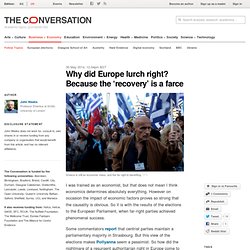 However on occasion the impact of economic factors proves so strong that the causality is obvious. So it is with the results of the elections to the European Parliament, when far-right parties achieved phenomenal success. Some commentators report that centrist parties maintain a parliamentary majority in Strasbourg. But this view of the elections makes Pollyanna seem a pessimist. So how did the nightmare of a resurgent authoritarian right in Europe come to pass? In 1950 Robert Schuman, the French foreign minister, proposed a co-operative and mutually supportive association of European countries which no one country could dominate.

This of course runs counter to the dominant media narrative, perfectly summed up by Claire Jones of the Financial Times who recently told us: “Recovery spreads across eurozone.” GDP measured as percentage difference from mid-2008 Click to enlarge. Bulgarian Prime Minister Borisov Resigns Following Violent Protests. Bulgaria's government bowed to political pressure Wednesday morning, stepping down after violent demonstrations in the capital Sofia over low living standards and government corruption. 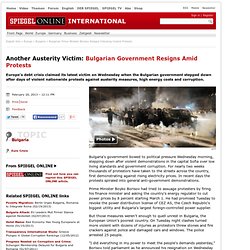 For nearly two weeks thousands of protestors have taken to the streets across the country, first demonstrating against rising electricity prices. In recent days the protests spiraled into general anti-government demonstrations. Prime Minister Boyko Borisov had tried to assuage protesters by firing his finance minister and asking the country's energy regulator to cut power prices by 8 percent starting March 1. Why the worst eurozone recession ever? The clue is in the word 'euro' Here is my op-ed piece from Thursday's Irish Daily Mail -- The eurozone economy: yes, it’s still shrinking. 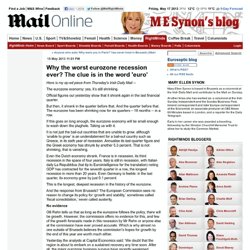 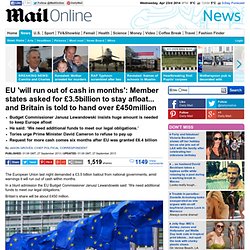 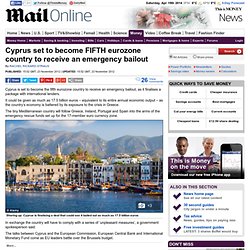 It could be given as much as 17.5 billion euros – equivalent to its entire annual economic output – as the country’s economy is battered by its exposure to the crisis in Greece. The tiny Mediterranean country will follow Greece, Ireland, Portugal and Spain into the arms of the emergency rescue funds set up for the 17-member euro currency zone. Austerity in Europe: what does it mean for ordinary people? Austerity has been the main prescription across Europe for dealing with the continent's nearly three-year-old debt crisis, brought on by too much government spending. 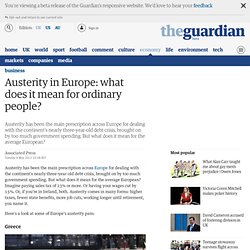 But what does it mean for the average European? Imagine paying sales tax of 23% or more. Or having your wages cut by 15%. Or, if you're in Ireland, both. Austerity comes in many forms: higher taxes, fewer state benefits, more job cuts, working longer until retirement, you name it. Draghi's new plan to save the euro: 'Goooood morning, Vietnam!' This is an edited version of my Eurowatch column in Friday's Irish Daily Mail -- Here, in just one line, is Mario Draghi’s latest plan to save the euro, as announced yesterday in Frankfurt: the ECB will buy lots of Spanish and Italian bonds once their governments promise to embrace eurozone-approved austerity. 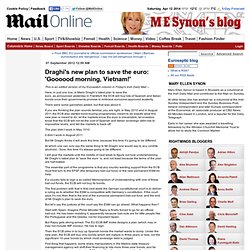 There were some garnishes added, but that was about it. If you are thinking the plan sounds familiar, you are right. In May 2010 and in August 2011 the ECB also started bond-buying programmes, meant to do exactly what this new plan is meant to do: let the markets know the euro is irreversible, let investors know that the ECB will not let the cost of Spanish and Italian sovereign debt rise to impossible levels, and tell the markets to back off. The case against Europe: MEP Daniel Hannan reveals the disturbing contempt for democracy at the heart of the EU. 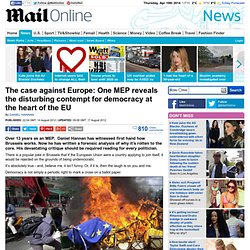 Now he has written a forensic analysis of why it’s rotten to the core. Van Rompuy: 'his charisma makes Hillary Clinton look like Mata Hari' This is too good not to pass on. Here are some lines from the brilliant Theodore Dalrymple, in his review of Daniel Hannan's book, A Doomed Marriage: Britain and Europe. The review appears in the current edition of the City Journal. You can find the full review online at www.city-journal.org -- '...Like all people with bad habits, politicians and bureaucrats are infinitely inventive when it comes to rationalizing the European Project, though they’re inventive in nothing else.' 'Without the Union, they say, there would be no peace; when it’s pointed out that the Union is the consequence of peace, not its cause, they say that no small country can survive on its own.' List of acronyms: European sovereign-debt crisis.

The Debt crisis: live as it happens. "Thinking the Unthinkable: Might there be no way out for Britain?" - very frank #collapsonomics analysis - European Debt Crisis: Who Loaned PIIGS the Money?