Twitter. Business innovation and thought leadership. James Moody, the former judge on ABC TV’s The New Inventors, has some new inventions of his own. 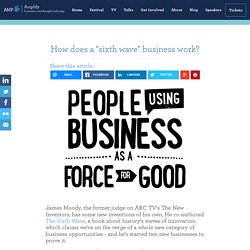 But towards the middle of a wave you start to see a few “dominant designs” like AC power or Window’s for PC and the end of the wave you have a global depression. The first wave was the Industrial Revolution (a move away from subsistence farming), the second was the railways (movement of building supplies like steel), the third was electrification (separating machines from their power source), the fourth was mass production (supply chains) and the fifth was information technology (the internet). There are two ways we make decisions. The Next Economy: After 'MarketWorld'  When the Berlin Wall fell in 1989 and took communism with it, the well-respected consulting firm Global Business Network (GBN) was asked to paint alternative scenarios for a post-Communist world. 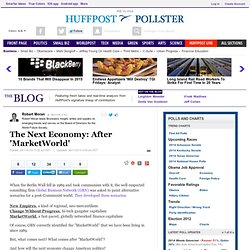 They developed three scenarios:New Empires, a kind of regional, neo-mercantilismChange Without Progress, hi-tech gangster capitalismMarketWorld, a fast-paced, globally networked finance capitalism Of course, GBN correctly identified the "MarketWorld" that we have been living in since 1989. But, what comes next? What comes after "MarketWorld"?

And how will the next economy change American politics? These are big questions that very little of contemporary American public opinion research addresses. Airbnb CEO spells out the end game for the sharing economy, in 7 quotes. The CEO of the sharing economy’s newest multibillion-dollar company, Airbnb, recently made some very bold predictions about how he and his industry will reshape the global economy. 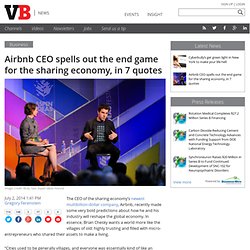 In essence, Brian Chesky wants a world more like the villages of old: highly trusting and filled with micro-entrepreneurs who shared their assets to make a living. “Cities used to be generally villages, and everyone was essentially kind of like an entrepreneur,” he told a packed room at the Atlantic Aspen Ideas Festival. “You were either a farmer, or you worked in the city as a blacksmith, or you had some kind of trade. And then the Industrial Revolution happened.” Part-time freelance work, known as contingent work, is on the rise. Contingent work is less certain: it has less legally sanction protections for both workers and consumers, though it often far (far) more flexible.

Given Chesky’s influence on this new economy, his new predictions (and personal influence) are of interest to many people. Sharing you can Believe in. For too long now I’ve been researching and advocating on behalf of systems of shared use. 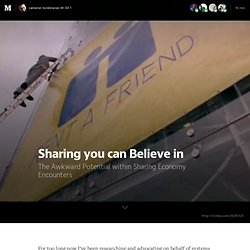 This year, the ‘sharing economy’ has shown itself to be overwhelmingly an anti-regulatory, precariat-creating way of monetizing social interactions. The term has been so exploited by some of the most vile, greedy technolibertarians around that it is time for me to write off more than a decade’s work. (When I do, I will refer to it as my ‘failed research focus startup’ so that it actually bolsters my credentials.) But because my other primary area of research has recently been revealed to be indubitaly an anti-Semite (I had before now thought that Martin Heidegger was that rare beast, a non-anti-Semitic uber-Nazi), I feel the need to make a last pitch for what I think is and could be the significance of ‘sharing economies.’

Dematerialization Simplistic Roadmaps from late 1990s The standard manufacturing approach to dematerialization is lightweighting, which has limits and rebounds. A. B. Are we 'under-sharing' as much as oversharing? Sharing is the story of this century. 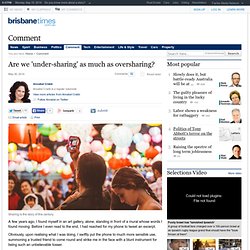 A few years ago, I found myself in an art gallery, alone, standing in front of a mural whose words I found moving. Before I even read to the end, I had reached for my phone to tweet an excerpt. Obviously, upon realising what I was doing, I swiftly put the phone to much more sensible use, summoning a trusted friend to come round and strike me in the face with a blunt instrument for being such an unbelievable tosser. But it made me realise how automatic the urge to share is, and how essential to the enjoyment of good things. "Happiness quite unshared can scarcely be called happiness; it has no taste," wrote Charlotte Bronte, long before the advent of peer-to-peer platforms and the like. Advertisement The geographical spaces between people have been shrunk by technology to a hair's breadth. But the "sharing economy" is moving from information to real stuff.

Their competition isn't retailers or eBay. Sharing makes people happy. Does The Sharing Economy Have a Shadow Side? The rise of the sharing economy has been chronicled in books and magazine stories. 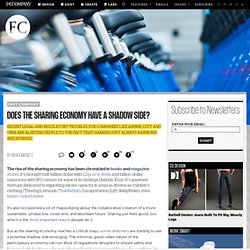 It's brought half-billion-dollar exits (Zipcar to Avis), and billion-dollar valuations with IPO rumors for some of its darlings (Airbnb, Etsy). It's spawned startups dedicated to exploiting excess capacity in areas as diverse as children's clothing (Thredup), errands (TaskRabbit), transportation (Lyft, RelayRides), even home-cooked meals. It's also occasioned a lot of rhapsodizing about the collaborative creation of a more sustainable, productive, close-knit, and abundant future.

Sharing just feels good, too, which is the most important reason people do it. But as the sharing economy reaches a critical mass, some observers are starting to see a potential shadow side emerging. The Sneeze-Guard Rule Sharing organizations tend to operate in a gray area between personal and commercial, public and private, Orsi writes, which makes it difficult to figure out how regulations apply.