Is This Man Responsible for China’s Stock Market Crash? A journalist detained by Chinese authorities is being held responsible for the “chaos” in China’s stock market. 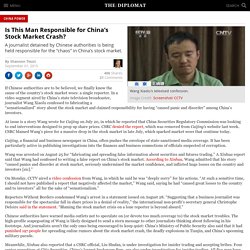 If Chinese authorities are to be believed, we finally know the cause of the country’s stock market woes: a single reporter. In a video segment aired by China’s state television broadcaster, journalist Wang Xiaolu confessed to fabricating a “sensationalized” story about the stock market and claimed responsibility for having “caused panic and disorder” among China’s investors. At issue is a story Wang wrote for Caijing on July 20, in which he reported that China Securities Regulatory Commission was looking to end interventions designed to prop up share prices.

CSRC denied the report, which was removed from Caijing’s website last week. CSRC blamed Wang’s piece for a massive drop in the stock market in late July, which sparked market woes that continue today. Capital - My taxes go where? How countries spend your money. WikiLeaks Strikes Again: Leaked TISA Docs Expose Corporate Plan For Reshaping Global Economy. Australia To Join Negotiations On Chinese-Led Bank. CANBERRA, Australia (AP) — Australia announced on Sunday that it would join negotiations to establish a new a Chinese-led Asian regional bank that has emerged as a potential challenge to United States influence in a part of the world where the Obama administration has tried to forge stronger ties. 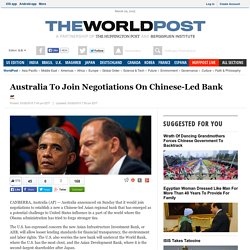 The U.S. has expressed concern the new Asian Infrastructure Investment Bank, or AIIB, will allow looser lending standards for financial transparency, the environment and labor rights. Russians move into bitcoin as ruble tanks. As oil prices plunge, wide-ranging effects for consumers and the global economy. Tumbling oil prices are draining hundreds of billions of dollars from the coffers of oil-rich exporters and oil companies and injecting a much-needed boost for ailing economies in Europe and Japan — and for American consumers at the start of the peak shopping season. 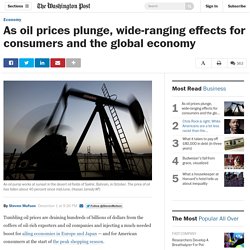 The result could be one of the biggest transfers of wealth in history, potentially reshaping everything from talks over Iran’s nuclear program to the Federal Reserve’s policies to further rejuvenate the U.S. economy. The price of oil has declined about 40 percent since its peak in mid-June and plunged last week after the Organization of the Petroleum Exporting Countries voted to continue to pump at the same rate.

That continued a trend driven by a weak global economy and expanding U.S. domestic energy supplies. The question facing investors, companies and policymakers is how low oil prices will go — and for how long. Breaking down China’s foreign aid and investment. By Paul Callan, Jasmin Blak, and Andria Thomas China has significantly expanded aid to and investment in developing countries in recent years. 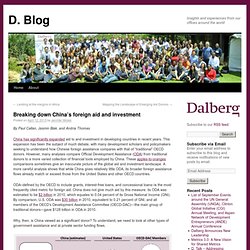 This expansion has been the subject of much debate, with many development scholars and policymakers seeking to understand how Chinese foreign assistance compares with that of “traditional” OECD donors. However, many analyses compare Official Development Assistance (ODA) from traditional donors to a more varied collection of financial tools employed by China. Swiss Federal Tax Administration FTA. Mt. Gox Goes Bankrupt After Losing $425 Million In Bitcoins. TOKYO (AP) — The Mt. 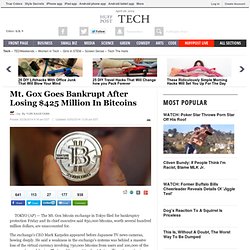 Gox bitcoin exchange in Tokyo filed for bankruptcy protection Friday and its chief executive said 850,000 bitcoins, worth several hundred million dollars, are unaccounted for. The exchange's CEO Mark Karpeles appeared before Japanese TV news cameras, bowing deeply. He said a weakness in the exchange's systems was behind a massive loss of the virtual currency involving 750,000 bitcoins from users and 100,000 of the company's own bitcoins. That would amount to about $425 million at recent prices.

The online exchange's unplugging earlier this week and accusations it had suffered a catastrophic theft have drawn renewed regulatory attention to a currency created in 2009 as a way to make transactions across borders without third parties such as banks. Countries Versus US States GDP Map. The Corporate Invasion. Imagine what would happen if foreign companies could sue governments directly for cash compensation over earnings lost because of strict labour or environmental legislation. 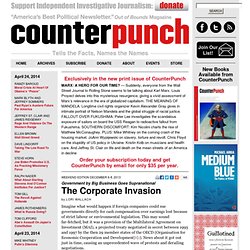 This may sound far-fetched, but it was a provision of the Multilateral Agreement on Investment (MAI), a projected treaty negotiated in secret between 1995 and 1997 by the then 29 member states of the OECD (Organisation for Economic Cooperation and Development) (1). News about it got out just in time, causing an unprecedented wave of protests and derailing negotiations. Now the agenda is back. Negotiations are expected to last another two years. China’s Market Enigma. Bitcoin value goes up, now accepted in China. Bitcoin’s price hit a record at $261 on the Bitstamp online exchange, driven by wider acceptance of the virtual currency. 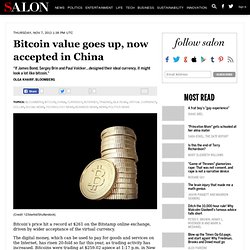 The digital money, which can be used to pay for goods and services on the Internet, has risen 20-fold so far this year, as trading activity has increased. To Hell and Back: Spain's Grotesque Recession and Its Surprising New Economy - Steven Hill. A not-so-short history of the Spanish economy: The half-century housing bubble, the excruciating recession, the grisly unemployment, and, finally, a glimmer of hope. 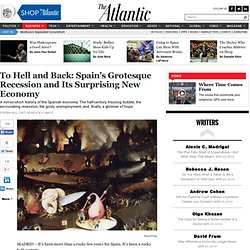 Bosch/Prado MADRID – It’s been more than a rocky few years for Spain. It’s been a rocky half-century. Sinaloa Cartel Runs The Chicago Drug Game. Cost of Living. The aporkalypse is coming. For The First Time Ever, Combined GDP Of Poor Countries Exceeds That Of Rich Ones (CHART) Quartz: For the first time ever, the combined gross domestic product of emerging and developing markets, adjusted for purchasing price parity, has eclipsed the combined measure of advanced economies. 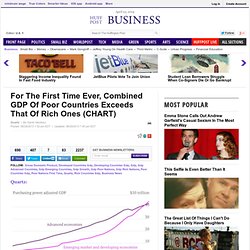 The Four Companies That Control the 147 Companies That Own Everything. Capital of Inequality. Part of San Francisco’s Union Square hyper-lux retail offerings, the De Beers store which features armed guards at the entrances. Ferrari recently opened a store a block away on Stockton Street. What $5 Gets You In Food Around The World. Secrecy for Sale: Inside the Global Offshore Money Maze. BRICS Nations Plan New Bank to Bypass World Bank, IMF. The biggest emerging markets are uniting to tackle under-development and currency volatility with plans to set up institutions that encroach on the roles of the World Bank and International Monetary Fund. 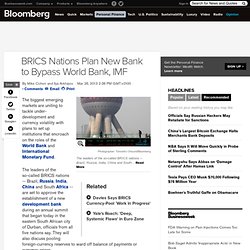 The leaders of the so-called BRICS nations -- Brazil, Russia, India, China and South Africa -- are set to approve the establishment of a new development bank during an annual summit that began today in the eastern South African city of Durban, officials from all five nations say. They will also discuss pooling foreign-currency reserves to ward off balance of payments or currency crises.

What does the collapse of solar-panel giant Suntech mean? Pricier panels, probably. The bankruptcy of Chinese solar-panel heavyweight Suntech may be an omen that the sun is about to set on super-cheap solar energy. The world’s biggest solar module manufacturer is on the verge of collapse under a pile of more than $1 billion in debt. The problem is not that the market for solar panels is weak.

The problem is that there is too much competition among manufacturers of panels, which has driven prices down to unsustainably low levels. Swedish migrant workers and Norwegian oil wealth have reversed the centuries-old Scandinavian power dynamic. Photo by David Michael. It is bizarre to think of modern Sweden, so often lauded as a paragon of social and economic stability, as coughing up migrant workers.

Stranger still is that Swedes migrate in extraordinary numbers to neighboring Norway, which has always been regarded in both countries as Sweden’s little brother. Often at war, Sweden forced Norway into an uneven union for most of the 19th century. Though politically independent of Sweden for more than 100 years, Norway has to this day remained culturally subordinate to its larger, more established neighbor. Norwegians watch Swedish television, listen to Swedish music, and read Swedish books. Another Goldman Creature Given Vital Government Post.

Young college grads fall through the safety net. Young men and women who pursue higher education are usually ineligible for social assistance from the welfare state. Trans-Pacific Partnership: The biggest trade deal you’ve never heard of. If you listened to the debate last night between Barack Obama and Mitt Romney on foreign policy, you would have heard a great deal on Israel, Iran and Libya, and a bit on China. The two rivals even touched on education policy, military spending and tax cuts for the wealthy. A Small Group of Companies Have Enormous Power Over the World. October 31, 2012 | The X factor in the Norwegian economy. Future of Work: Finding Value in the Rejects of the Job Economy. The Intruders. The Zero Bound - By Tim Duy. In a report released in the lead-up to its big meeting in Tokyo this week, the International Monetary Fund cut its global growth forecasts and sharply warned that the world economic slowdown is worsening.

Rubber Ducks And Cheap Watches: Photos From New York's Junk Economy : Planet Money. Every day, small shop owners from Africa and Latin America fly into New York with wads of cash and empty suitcases. As Robert Smith reports today, their destination is zip code 10001 in Manhattan, home to a cluster of wholesale stores selling a quirky mix of decently made goods at cheap prices.

These stores are no frills and specialize in everything from rubber ducks to skin-lightening cream and hair extensions. World debt comparison: The global debt clock. London is the ‘global capital of money-laundering’