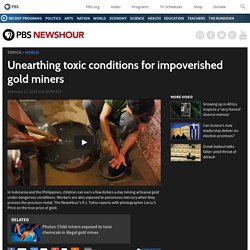 But some of that gold comes at a high price for the impoverished nations that produce it. The NewsHour’s P.J. Tobia has this report, the latest in a series by photographer Larry C. Price. Indonesia's parliament approves ambitious first Widodo budget. JAKARTA: The Indonesian parliament approved President Joko Widodo's first budget, which cuts the fiscal deficit while lifting infrastructure spending, but analysts doubt some of the numbers will add up. 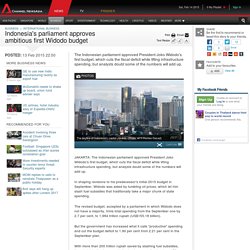 In shaping revisions to his predecessor's initial 2015 budget in September, Widodo was aided by tumbling oil prices, which let him slash fuel subsidies that traditionally take a major chunk of state spending. The revised budget, accepted by a parliament in which Widodo does not have a majority, trims total spending from the September one by 2.7 per cent, to 1,984 trillion rupiah (US$155.18 billion). But the government has increased what it calls "productive" spending and cut the budget deficit to 1.90 per cent from 2.21 per cent in the September plan.

With more than 200 trillion rupiah saved by slashing fuel subsidies, the administration increased infrastructure spending by almost 50 per cent, and hiked budgets including for social security and direct transfer to villages. Thestar.com. Jokowi seen making another concession to party crony. JAKARTA — President Joko “Jokowi” Widodo has left Indonesians flabbergasted at his decision to appoint a little-known company led by a political supporter as the local partner for a joint venture to build a national car. 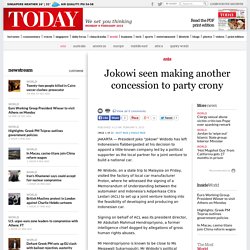 Kernel Oil Admits to Paying $700,000 in Bribes to SKKMigas. A visitor uses his mobile phone as he walks at the lobby of the SKKMigas office in Jakarta, August 14, 2013. 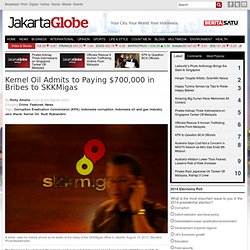 (Reuters Photo/Beawiharta) Top Indonesian Energy Official Barred From Travel in Latest Government Scandal - Media. Indonesia pushes interest rates up again with predictions of 10 per cent inflation by end of year. Indonesia's central bank has raised the prospect that inflation will hit almost 10 per cent by the end of the year, as it deals with a worsening economy. 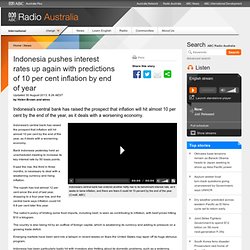 Bank Indonesia yesterday held an unscheduled meeting to increase its key interest rate by 50 basis points. It said the rise, the third in three months, is necessary to deal with a weakening currency and rising inflation. The rupiah has lost almost 12 per cent since the end of last year, dropping to a four-year low, and the central bank says inflation could hit 9.8 per cent later this year. The nation's policy of limiting some food imports, including beef, is seen as contributing to inflation, with beef prices hitting $10 a kilogram. The country is also being hit by an outflow of foreign capital, which is weakening its currency and adding to pressure on a growing trade deficit. Emerging markets have been sent into a tailspin in recent weeks on fears the United States may taper off its huge stimulus program.

WE WON! adidas pays Kizone workers — Clean Clothes Campaign - Pale Moon. International campaigners and workers have forced German sportswear giant Adidas to settle with workers who have been fighting for the money owed to them since April 2011, when the factory closed down and was declared bankrupt. 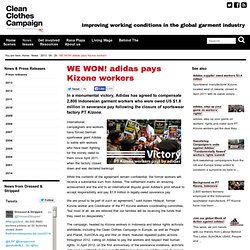 While the contents of the agreement remain confidential, the former workers will receive a substantial sum from Adidas.

Indonesia: Bank bailout sparks political crisis. The Bank Century bail out in Indonesia has become a national scandal which divided public opinion and the House of Representatives. 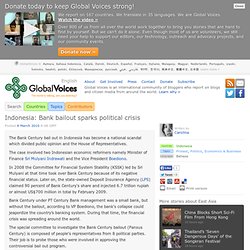 The case involved two Indonesian economic reformers namely Minister of Finance Sri Mulyani Indrawati and the Vice President Boediono. In 2008 the Committee for Financial System Stability (KSSK) led by Sri Mulyani at that time took over Bank Century because of its negative financial status. Later on, the state-owned Deposit Insurance Agency (LPS) claimed 90 percent of Bank Century's share and injected 6.7 trillion rupiah or almost US$700 million in total by February 2009. 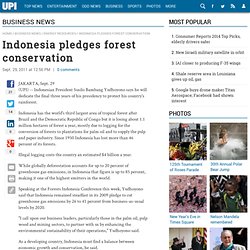 Indonesia has the world's third largest area of tropical forest after Brazil and the Democratic Republic of Congo but it is losing about 1.1 million hectares of forest a year, mostly due to logging for the conversion of forests to plantations for palm oil and to supply the pulp and paper industry. Since 1950 Indonesia has lost more than 46 percent of its forests. Illegal logging costs the country an estimated $4 billion a year. While globally deforestation accounts for up to 20 percent of greenhouse gas emissions, in Indonesia that figure is up to 85 percent, making it one of the highest emitters in the world. Speaking at the Forests Indonesia Conference this week, Yudhoyono said that Indonesia remained steadfast in its 2009 pledge to cut greenhouse gas emissions by 26 to 41 percent from business-as-usual levels by 2020. End of the Line for Jakarta's Monorail Mess. Confidence in Indonesian economy. Authors: Chris Manning, ANU, and Raden M Purnagunawan, Padjadjaran University. 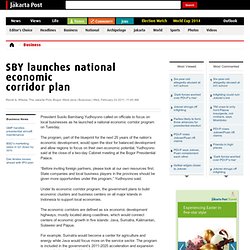 The program, part of the blueprint for the next 25 years of the nation’s economic development, would open the door for balanced development and allow regions to focus on their own economic potential, Yudhoyono said at the close of a two-day Cabinet meeting at the Bogor Presidential Palace. “Before inviting foreign partners, please look at our own resources first. State companies and local business players in the provinces should be given more opportunities under this program,” Yudhoyono said. Under its economic corridor program, the government plans to build economic clusters and business centers on all major islands in Indonesia to support local economies.

For example, Sumatra would become a center for agriculture and energy while Java would focus more on the service sector.