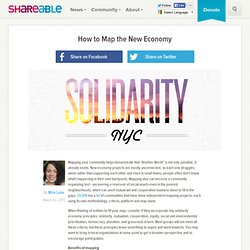 New economy projects are mostly unconnected, so each one struggles alone rather than supporting each other and even in small towns, people often don't know what's happening in their own backyards. Mapping also can become a community organizing tool - uncovering a reservoir of social assets even in the poorest neighborhoods, which can seed mutual aid and cooperative business ideas to fill in the gaps. USSEN has a list of communities that have done independent mapping projects, each using its own methodology, criteria, platform and map name. When thinking of entities to fill your map, consider if they incorporate any solidarity economy principles: solidarity, mutualism, cooperation, equity, social and environmental prioritization, democracy, pluralism, and grassroots driven.

Most groups will not meet all these criteria, but these principles leave something to aspire and work towards. New App Lets You Boycott Koch Brothers, Monsanto And More By Scanning Your Shopping Cart. In her keynote speech at last year’s annual Netroots Nation gathering, Darcy Burner pitched a seemingly simple idea to the thousands of bloggers and web developers in the audience. 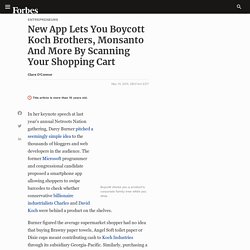 Similarly, purchasing a pair of yoga pants containing Lycra or a Stainmaster carpet meant indirectly handing the Kochs your money (Koch Industries bought Invista, one of the world’s largest fiber and textiles companies, in 2004 from DuPont). 2012 Map of the Decade. A Century of Transformation, A Decade of Turbulence Today, even as the incumbent patterns are fading, a new world is taking shape. 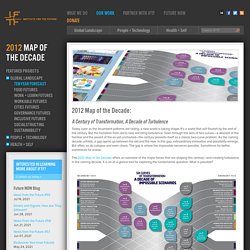 It's a world that will flourish by the end of the century. But the transition from old to new will bring turbulence. Seen through this lens of two curves—a descent of the familiar and the ascent of the as-yet-uncharted—the century presents itself as a classic two-curve problem. Alternative Finance System Map. The U.S. Needs to Make More Jobs More Creative - Roger Martin. Founder Institute’s Requirement - Create a Company.

Jason Pontin: Can technology solve our big problems? Jaron Lanier: Why Facebook Isn't Free. Heads you win, tails you lose. The Long Tail is one of the most commonly quoted models for business on the Internet: The Long Tail or long tail refers to the statistical property that a larger share of population rests within the tail of a probability distribution than observed under a ‘normal’ or Gaussian distribution. 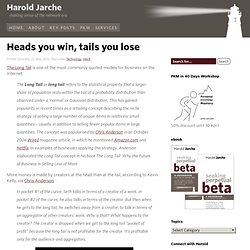 This has gained popularity in recent times as a retailing concept describing the niche strategy of selling a large number of unique items in relatively small quantities – usually in addition to selling fewer popular items in large quantities. The concept was popularised by Chris Anderson in an October 2004 Wired magazine article, in which he mentioned Amazon.com and Netflix as examples of businesses applying this strategy. What's Wrong with Technological Fixes? If you are looking for some smart, informed skepticism about the promise of digital technology to cure important problems, Evgeny Morozov is the critic for you. 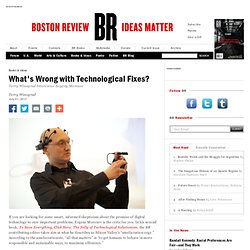 In his second book, To Save Everything, Click Here: The Folly of Technological Solutionism, the BR contributing editor takes aim at what he describes as Silicon Valley’s “amelioration orgy.” According to the ameliorationists, “all that matters” is “to get humans to behave in more responsible and sustainable ways, to maximize efficiency.” Morozov characterizes this impulse to fix everything as “solutionism,” and offers two broad challenges to the solutionist sensibility. First, solutionists often turn public problems into more bite-sized private ones. A radical dream for making techno utopias a reality. CUPERTINO Calif. -- Balaji Srinivasan opened his Y Combinator startup school talk with a joke: Is the US the Microsoft of nations? 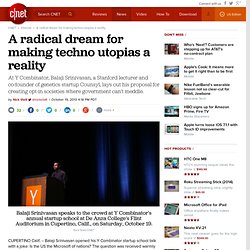 The question was received warmly by the crowd of more than 1,700 and did in fact have a logical conclusion: Larry Page and Sergey Brin, co-founders of Google, were exactly what Bill Gates feared when he said in 1998 that two people in a garage working on something new was Microsoft's biggest threat. What ties those two seams together? The idea of techno-utopian spaces -- new countries even -- that could operate beyond the bureaucracy and inefficiency of government. It's a decision that hinges on exiting the current system, as Srinivasan terms it from the realm of political science, instead of using one's voice to reform from within, the very way Page and Brin decided to found their search giant instead of seek out ways in which the then-current tech titans could solve new problems.

Srinivasan sees exiting happening all the time, thanks to the Internet.