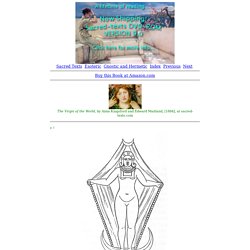 Heaven, crowned with stars, is placed above universal nature, O my son Horos, and nothing is wanting to it of that which constitutes the whole world. [of p. 2 of the greater mysteries over the lesser is imperative. Now, my wondrous child Horos, all this could not happen among mortals, for as yet they did not exist; but it took place in the universal Soul in sympathy with the mysteries of heaven. [stars. p. 3 stars. Hermes then justified himself in the presence of those who surrounded him, in that he had not delivered the integral theory to his son, on account of his youth. [Hermes p. 4 [paragraph continues] Hermes when he laid down his books. [them p. 5. The Blue Roebuck. Almost every part of the female genitals eventually became personified as a Goddess, as did the fluids associated with them. 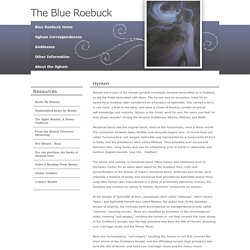 The hymen was no exception, ruled by an eponymous Goddess later considered an emanation of Aphrodite. She carried a torch in one hand, a flute in the other, and wore a crown of flowers, symbol of sexual self-knowledge and maturity. Hymen is the Greek word for veil, the same one that 'no man draws asunder' among the Amazon Goddesses Athena, Medusa, and Neith. Menstrual blood was the original blood, shed on the honeymoon, once a literal month. The connection between bees, fertility, and sexuality begins here. The Heavenly Veil Torn: Cosmic Symbolism in the Gospel of Mark. [Originally published in Journal of Biblical Literature 110:1 (Spring 1991) pp. 123-25] Babylonian tapestry, with embroidery of blue and fine linen, of scarlet also and purple, wrought with marvelous skill. 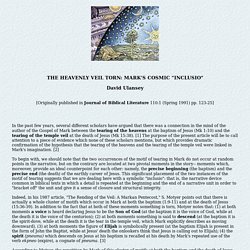 Nor was this mixture of materials without its mystic meaning: it typified the universe.... Then Josephus tells us what was pictured on this curtain: Portrayed on this tapestry was a panorama of the entire heavens.... [7] [emphasis mine] The Veil Rent. Women and Their Affines: The Veil as a Symbol of Separation on JSTOR. Religious%20Veil. The Removing of Hijab in Iran. The Removing of Hijab in Iran Thursday, February 7, 2013 Compiled By: Firouzeh Mirrazavi Deputy Editor of Iran Review. 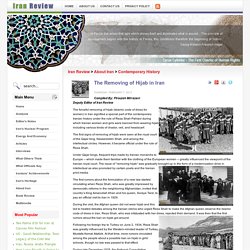 Chaosophia218 — Joannes Janssonius - Selenographic Diagram... A Seeker's Thoughts: Veil Of Isis - Symbol and Mythology. "No mortal shall pierce the Veil of Isis. 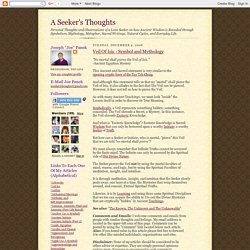 " -Ancient Egyptian Mystery This Ancient and Sacred statement is very similar to theopening cryptic lines of the Tao Teh Ching. And although this statement tells us that no "mortal" shall pierce the Veil of Isis, it also alludes to the fact that The Veil can be pierced. However, it does not tell us how to pierce the Veil. As with many Ancient Teachings, we must look "inside" the Lesson itself in order to discover its True Meaning. Symbolically, a Veil represents something hidden; something concealed. And what is "Esoteric Knowledge"? But how can a Seeker or Initiate, who is mortal, "pierce" this Veil that we are told "no mortal shall pierce"? We must always remember that Infinite Truths cannot be accessed by the finite mind. The Veil. Most people think of the veil solely in terms of Islam, but it is much older. 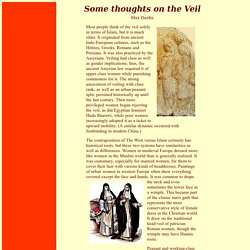 It originated from ancient Indo-European cultures, such as the Hittites, Greeks, Romans and Persians. It was also practiced by the Assyrians. Veiling had class as well as gender implications; thus, the ancient Assyrian law required it of upper class women while punishing commoners for it. Solar wind. History[edit] The existence of a continuous stream of particles flowing outward from the Sun was first suggested by British astronomer Richard C. 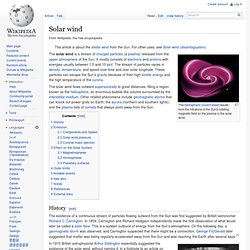 Carrington. In 1859, Carrington and Richard Hodgson independently made the first observation of what would later be called a solar flare. This is a sudden outburst of energy from the Sun's atmosphere. On the following day, a geomagnetic storm was observed, and Carrington suspected that there might be a connection.

Laboratory simulation of the magnetosphere's influence on the Solar Wind; these auroral-like Birkeland currents were created in a terrella, a magnetised anode globe in an evacuated chamber. Coptic apocryphal Gospels : Robinson, Forbes, 1867-1904, [from old catalog] tr. Newman Research Centre for the Bible and its Reception. Most readers of the New Testament are familiar with the idea that Paul used the Hebrew scriptures (Old Testament). 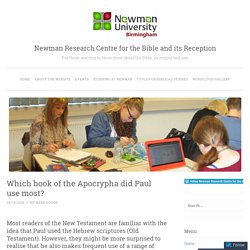 However, they might be more surprised to realise that he also makes frequent use of a range of Jewish religious writings that are not included in the Hebrew Bible (sometimes referred to as ‘apocryphal’). Which apocryphal book did he use the most and which of his letters reflect the influence of this group of writings? Our last wordcloud explored Paul’s use of the Tanakh (Hebrew scriptures) and identified which of them he used (quoted or alluded to) the most. Hand-held Coptic Cross Steatite Egypt 600 CE. Badge creator Use Flickriver Badge Creator to create a badge linking to your photos, your group or any other Flickriver view. 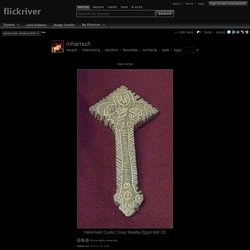 You can place your badge on your Flickr profile, Blog or Website. Add to your iGoogle or Netvibes page Flickriver widget for iGoogle or Netvibes can display almost any Flickriver view - most interesting today, by user, by group, by tag etc. Down the Rabbit Hole. ‹♦ Christianity was introduced to most of the African continent during the late 19th century by European missionaries. 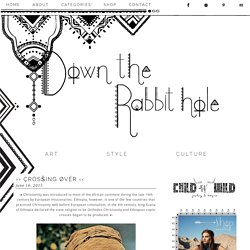 Ethiopia, however, is one of the few countries that practiced Christianity well before European colonialism. In the 4th century, King Ezana of Ethiopia declared the state religion to be Orthodox Christianity and Ethiopian coptic crosses began to be produced. ♦› ‹♦ Ethiopian crosses are easily distinguishable from their beautiful baroque style lattice work. In general, elaborate geometric patterns are seen in Ethiopian art, so it’s not surprising this tradition was carried into their crosses.

Wikipedia - Stauros. HOW THEY SAW THE COPTS: “AN EGYPTIAN PEASANT WOMAN AND HER CHILD” BY THE FRENCH PAINTER LÉON BONNAT: A STUDY IN HER COPTIC IDENTITY. Figure 1: Self-portrait, Léon Joseph Florentin Bonnat, 1855 Léon Joseph Florentin Bonnat (1833-1922) was a French painter. This is not the place to give the reader a detailed biography of him.[1] There is no doubt that Bonnat is widely recognised as one of the greatest French painters with international reputation.

He is renowned for his religious paintings, and many, including several Copts, are familiar with some of these, particularly his Christ on the Cross.[2] He is also famous as one of the best portraitists. But what interest us here are his Orientalist themes, of which at least one is Coptic. Bonnat visited Egypt and Sinai in 1868/9 in a trip that took him also to Palestine, Turkey and Greece; a journey in which two other French painters accompanied him, Jean Leon Gerome[3] and Paul Lenoir,[4] and also a French writer, Edmond About.[5] Some of Bonnat’s famous paintings go back to the period of his stay in Egypt during that short sojourn. A General History of the Near East, Chapter 8. 226 to 570 (All dates are A.D. from now on.) This chapter covers the following topics: The Sassanian or Neo-Persian Empire The defeat and death of Artabanus V did not eliminate opposition to Ardashir, who now held western Iran, Iraq and Kuwait.

A powerful coalition formed to restore the Parthians, led by King Khosrau I of Armenia (Remember that the Armenian kings were also Parthian at this point). One reason for Ardashir's success was that he reorganized Persia, turning it into a tightly centralized state. To encourage popular support, Ardashir kept reminding the people of Persia's proud past. Judith Shaw - Life on the Edge. Create Your Space You need a space for your creative work even if it’s only a small space.

In your creative space you can keep the tools you need, whatever they may be. Make it comfortable and practical. Take a moment to visual your space. Make it personal. EgyptSearch Forums: EUROCENTRIC WIKIPIDIA SAYS BLACK AFRICANS LEARNT CIRCUMCISION FROM ARABS AND JEWS!!WT. Coptic Chant at Chant the Rosary. EARTH AND HER SPECIAL PLACES: 24 THE CROSS (2) Unurthed. Nine figures from Jonas Salk and Jonathan Salk’s 1981 pictographic essay, World Population and Human Values.

Icons of the Matrix III. The Goddess and the Bear: Hybrid Imagery and Symbolism at Çatalhöyük. The Great Nation in Decline: Sex, Modernity and Health Crises in ... - Professor Sean M Quinlan - Google Books. Ldr7 india. Babylonian Goddesses. Ishtar In Babylonian culture, Ishtar was known as "she who endowed the king with prestige. " Thought to engage in periodic ritual sacrifice of their kings, Ishtar's priestesses were credited with bringing forth a bountiful harvest with his blood. She is the goddess of love, fertility and (later) war, who was widely worshipped in the Mesopotamian region under various names (Inanna in Sumer) for over 5000 years.