Rainbow Cake in a Jar 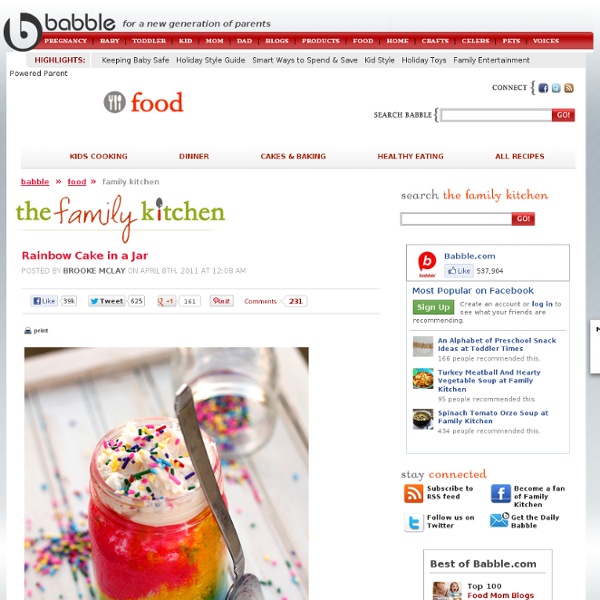 I’ve always had a penchant for sunshine in a jar. Doesn’t the very phrase itself, “sunshine in a jar,” roll off your tongue and fill your mouth with magic? While I’ve never yet found myself a sunshine in a jar, I think we may have just concocted it in our kitchen tonight. In this simple recipe, a basic white cake is turned into a slew of bright colors, baked to perfection, then topped with a creamy white frosting. Cakes baked in jars can be topped with traditional metal canning lids and stored in the fridge for up to five days. They make a great treat to ship to someone, so long as you can ensure delivery to it’s final destination within 3 days. Rainbow Cake in Jar 1 box white cake mix made according to package instructionsNeon food coloring in pink, yellow, green, turquoise, and purple3 one-pint canning jars1 can vanilla frostingRainbow sprinkles Preheat oven to 350 degrees. Scoop about 1/2 cups of cake batter into five small bowls.

Say it with Cake - {Super Epic Rainbow Cake} Click here to buy a print! Two cakes in one week. I might have a bit of a problem. Easy Homemade Granola — A Southern Fairytale Homemade Granola, delicious crunchy, sweet, crispy and fruity. I remember eating granola as a kid; my mom made the most amazing granola. Doused in chilled milk or snatched from a bag in my tiny fist, my mom’s granola was better than any boxed version. As an adult and admitted food and recipe obsessed person, it’s somewhat embarrassing to admit that homemade granola is one thing I’ve never tackled.

Chocolate Chip Cookie Dough Truffles I’ve never liked chocolate chip cookies. Go ahead and throw tomatoes at me if you’d like, but I don’t like ’em. They’re just a plain old cookie, after all, with a few studs of chocolate chips in them. They’re nothing special to me, unless you get some cookie dough-action before it meets its fate in the oven. Now you’re talkin’. I’d much rather drown my sorrows in a bowl of cookie dough than nibble a dozen “cookies” dipped in milk. Tiny Cupcakes - Cupcake Poppers Is it a macaron? A whoopie pie? What are you making over there? Banana Split Bites Banana Split Bites ~ A classic ice cream dessert gets mini for some bite size fun. And yes, there is actually a tiny scoop of ice cream tucked inside and underneath the whip cream of those little darlings. Banana Split Mini Bites For once I made something mini for portion control and not just for the cute factor. My little guy had some friends over the other day and of course with a mom who is a baker, the expectation is dessert will not only be good but it will be fun. And I was asked, by friend Caroline, not to let her boys eat too much dessert.

Martha Stewart's Cookies and Cream Cheesecakes Recipe Posted by Grace Massa Langlois on Wednesday, 21st July 2010 I have yet to meet a person who doesn’t like Oreo cookies or Cream Cheesecake Cupcakes. Who could resist cream-filled chocolate sandwich cookies?

not martha - Leprechaun Trap Cake This may look like a perfectly innocent cake meant to lure a leprechaun to the top but it has a few secrets. Secret #1: Beneath the pile of gold coins are fragile bars, when the leprechaun approaches to grab the coins he’ll fall into the pit and be trapped. Secret #2: There is a rainbow hiding inside the cake. The leprechaun will discover this as he eats his way to freedom. Have you heard of Leprechaun traps? I hadn’t encountered these until this year, and I am completely charmed by them. Baked Doughnuts with Cinnamon-Sugar Today’s post comes from Tracy at Sugarcrafter. Tracy lives in upstate NY with her husband, kitty, and brand new puppy. Her blog, Sugarcrafter, is a baking and cooking blog that features from-scratch recipes using wholesome ingredients with step-by-step directions to give you the confidence you need to conquer any recipe. She also enjoys canning, hiking, camping, and quilting. You can follow Tracy on Twitter @sugarcrafter and become a fan on Facebook.

Double Rainbow Cake Jelly Shot My own August birthday may have also come into play. Regardless of the impetus, visions of tiny jelly shot “cakes” have been dancing in my head for weeks, so clearly the Tablespoon.com gang couldn’t avoid the Double Rainbow Cake Jelly Shot had they tried! (Luckily, they were all for it!) Chocolate Guinness Cupcakes with Whiskey and Baileys The only way a good stout beer, whiskey, and Irish cream liquor could be better is if they were mixed together - a la an Irish Car Bomb. Better still though, would be mixing it all up with some chocolate in the form of rich Guinness chocolate cupcakes, filled with Jameson chocolate ganache, and topped with Bailys buttercream frosting. Variations on this recipe can be found on loads of amazing food blogs like Smitten Kitchen, the Busty Baker, and others! Note: These do contain some booze that isn't cooked off, so please be careful (no heavy machinery, etc.) and keep them away from the youngsters. Also Note: "Irish Car Bomb" is a pretty horrible thing to call a drink or a cupcake.

Chocolate Cupcakes with Flaming Strawberries Call me easily amused, but these little torch-topped cupcakes delight me. Besides being a cute novelty item for a party, I think they would add a little drama to the end of a romantic meal. I've been looking for something different to serve for Valentine's dessert, and this is definitely different. The strawberries are hollowed out and filled with a bit of liquor, then ignited with a match. For the cake portion, I chose a One Bowl Chocolate Cupcake recipe because 1. it's quick 2. it is easy, and 3. it fits my prerequisite for a light ending on date night. I should say, a light ending provided you don't eat too many.