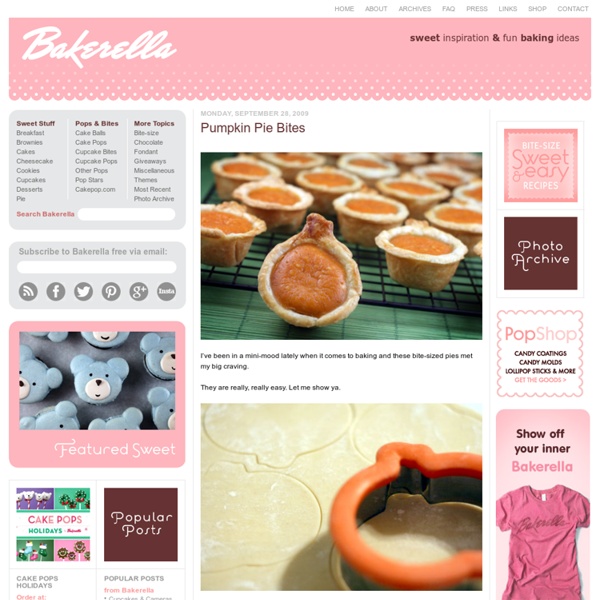 I’ve been in a mini-mood lately when it comes to baking and these bite-sized pies met my big craving. They are really, really easy. Let me show ya. Of course, it didn’t hurt that I used ready to roll refrigerated pie crust. It comes two to a box and if you roll each round pie crust a little bit thinner with a rolling pin, you can get 24 mini pumpkin-shaped pie crusts out of them. Make sure you use all the dough scraps and re-roll to maximize quantities. Then, stuff each one in a mini muffin baking pan. Press the dough down, in and around the edge of each muffin cup. Fill each pie crust with pumpkin filling all the way to the top. When they come out of the oven, they’ll be puffed up like this. But no, after they cool for a few, they’ll fall and be flush with the pie crust. See… easy mini pumpkin pie bites. You can even drizzle them with melted chocolate to jazz them up a bit. But wait… you say you don’t want to wait until Thanksgiving. I don’t blame you. Cute! And I’ll say it again… easy! Enjoy!

Martha Stewart's Cookies and Cream Cheesecakes Recipe Posted by Grace Massa Langlois on Wednesday, 21st July 2010 I have yet to meet a person who doesn’t like Oreo cookies or Cream Cheesecake Cupcakes. Who could resist cream-filled chocolate sandwich cookies? Not Me! Especially the double-stuffed Oreo cookie, it’s one of the best cookies for dunking into a cold glass of milk. I went out yesterday to do my weekly shop, came home, and before I was able to bring in the first grocery bag Matt was hunting for the cookies and cream ice cream.

Tutorial: Marble Chocolate Cake Like the Marble Cake I made last weekend? Want to know how INCREDIBLY easy it is to make? Then keep reading… 1 x Frosted Cake – I used a 2 layer Vanilla Sponge Cake covered with Chocolate Buttercream400g White Chocolate400g Dark ChocolateGreaseproof Paper Grab your iced cake to start, the final cake looks like it has multiple tiers but thats just the effect of the chocolate decorations.

Strawberry & Chocolate Nachos I’ve said it once and I’ll say it again: sometimes the best creations are the ones you don’t set out to create! This might be my new favorite thing. It’s the perfect easy, throw-together, family style dessert for summer. I did a local tv segment this week and made my Baked Cinnamon Chips and Fruit Salsa. When I got home I had a bag full of cinnamon chips left over and started snacking.

Dangerous Chocolate Cake My mama e-emailed this recipe to me, and I'm not sure whether she did it because she loves me, or she wants me to die of dessert overdose. It's a chocolate cake in a mug!! HELLO! I ate it for lunch today, because I decided that it would take less time to make than a turkey sandwich. Maybe that's not true, and I ate it today because it's chocolate cake in a mug, but you get the point. 5 Minute Chocolate Cake Recipe Ferrero Rocher Cupcakes: Rich Chocolate Cupcakes with Hazelnut Kimberly of Kimberly C Baking emailed me about the idea of a Ferrero Rocher cupcake. After I wondered, “What the heck is a Ferrero Rocher?” I looked up Ferrero Rocher on Wikipedia and declared it a great idea. We talked about her idea for a bit and Kimberly suggested that we both bake different styles of Ferrero Rocher cupcakes and blog about it; another great idea. I was on board still never having tasted the chocolate behind the gold foil.

Strawberry Shortcake Cupcakes Who doesn’t love Strawberry Shortcake? No, not that Strawberry Shortcake. Although, she is awfully cute! I’m talking about this Strawberry Shortcake. Tiramisu Cheesecake Bars May 17, 2011 | Print | E-mail | Filed under cheesecake, chocolate, coffee Every Easter, I try to come up with a new dessert to serve the family. The first year we hosted, it was fruit tartlets. The second year, I believe it was Oreo truffles. After that, things get a little fuzzy and I can’t remember exactly what I made each year…but this year, it was these tiramisu cheesecake bars. I’m not going to lie, they take some time in the kitchen between all of the baking and cooling – but none of the steps are that hard, promise!