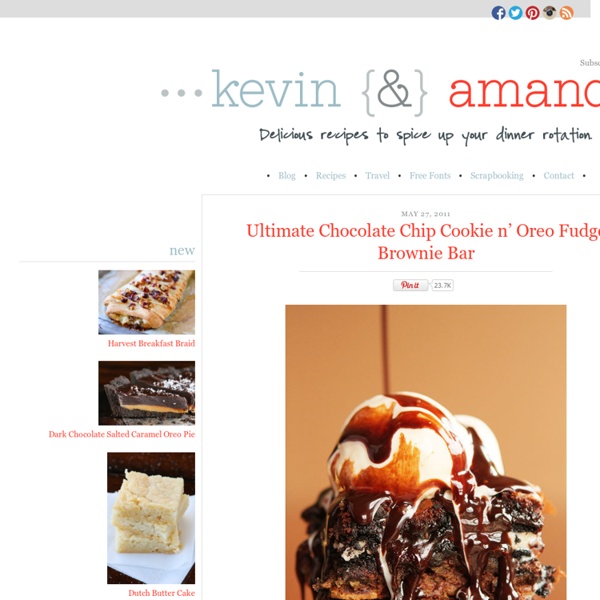 On Wednesday, I wondered what would happen if you combined Oreo Stuffed Chocolate Chip Cookies with Oreo Stuffed Brownies. On Thursday I found out. And on Friday… I had this. This beautiful, ridiculous, indulgent, outrageous, illegal in 48 states, totally wonderful ultimate layered cookie and brownie treat. It is without a doubt, completely and utterly insane. But I mean that in a good way. These dangerously decadent chocolate chip cookie ‘n brownie bars combine the best of a gooey chocolate chip cookie, warm fudgy brownie, and an extra sweet double stuffed Oreo. All you need is a basic chocolate chip cookie recipe (using a little less flour than you normally would), some double stuffed Oreos, a family-sized brownie mix for a 9×13 pan, and some hot fudge chocolate topping for good measure. Line a 9×13 baking dish with foil or parchment paper and spray with cooking spray. Whip up your cookie dough and spread it in the bottom of the pan. Cover with Oreos… Oh, baby. Who wants cookies? Directions:

Cinnamon Sugar Pull-Apart Bread — Joy the Baker - StumbleUpon I’m sorry. I know it’s Monday morning and you probably came here for some pretty pictures of food that you could glance at, and then move on with your day… and here I go thrusting warm, soft cinnamon sugar bread in your face. It’s not fair. I know it’s not fair. I know that now you’re craving cinnamon rolls, and cream cheese frosting and chili fries and hot dogs. I am too… and I already ate half of this warm bread. italian sodas June 30, 2011 | Sweet Recipes | Comments Growing up, these Italian sodas were my favorite!! My mom and I would always stop by a little coffee shack on our road trips to Oregon. I remember ordering the blueberry Italian soda in the summer instead of ice cream because they were so refreshing. I hadn’t had one of these since I was a kid, so I wanted to recreate the easy recipe.

New York-Style Cheesecake Recipe Cheesecake is one of my great loves. Given the choice between it and a myriad of other desserts, I will choose cheesecake everyday and twice on Sunday. I’m sure you’re not too terribly surprised, seeing as how I bombard you with more than my fair share of cheesecake recipes. I just can’t help it; I’ve been head over heels in love with cheesecake for as long as I can remember. While I’ve given you recipes for things like brownie mosaic cheesecake, fig almond cheesecake, pumpkin cheesecake and peanut butter-fudge cheesecake (among many, many others), it dawned on me that I’ve never shared a recipe for a straight-up New York-style cheesecake. Nutella Mug Cake Bring Your Child's Favorite Characters to Life with These Disney-Themed Lunches Healthy Mickey-Shaped PB&J Muffins: A Breakfast the Whole Family with Love A Yummy Instant Pot Chicken and Rice Recipe Even the Pickiest Eaters Will Love This 3-Ingredient Coffee Fudge Is the Best Morning Pick-Me-Up

Inspired Entertaining: DIY Chalkboard Wine Glasses Last month I got an email from one of those "deal of the day" websites featuring a very cute set of wine glasses with chalkboard stems from a company called Chalkboard China. I've seen chalkboard glasses before, and always thought them to be a fun and chic way for guests to keep track of their glass throughout the night so you don't end up with mixed-up glasses or dozens of half-full glasses left around the house. But all the ones I've seen in stores feature a strip of chalkboard paint across the bowl of the glass, which I've always felt looks awkward and takes away from the beauty of the wine or beverage in the glass. What I like about this version is that the writing part is at the bottom on the stem and foot of the glass, so it doesn't compete with the beverage. I also like that the simple black foot on the glass is in itself an elegant design element, and would work just as well with no writing on it. So I figured, "I can totally make that myself!"

Vanilla Cupcake Recipe with Vanilla Buttercream Frosting Recipe I can’t remember if I mentioned to you our little jaunt to Georgetown over the summer. I don’t think I did, did I? In any case, we descended on Georgetown with the sole purpose of taste testing cupcakes. Our first stop was naturally Georgetown Cupcake, which is featured on the TLC series “DC Cupcakes”. After struggling to find a parking spot and then standing in a 30-minute line on the hottest day of summer (I think the temp topped 110 that day), we finally got to place our order.

How To Make Perfect Brownies I’ve tried lots of brownie recipes: Boxes, scratch, frosted, plain, nuts, chips, fudge … Each of them has something to like, but depending on my mood I might want a change of pace. Not any more. My wife found this recipe, and it’s perfect. The Ancient Greco-Roman Ruins of Historic Jerash in Jordan Petra isn’t Jordan’s only ancient treasure, say hello to Jerash! The oval Forum and the south end of the Cardo in Jerash The Decapolis of the Roman Empire Gerasa, also referred to Antioch on the Golden River, was one of ancient Rome’s ten cities of the Decapolis on the eastern frontier of the Roman Empire in Judea and Syria.

Banana Cupcakes Anyone else out there love Sally’s Baking Addiction?! I certainly do! I love Sally’s recipes, photography, love of sprinkles, and her sweet personality (and Jude’s love of peanut butter). I Am Now In The Muffin Loop I am so sick. Of myself. Do you know what I mean? 30 Bizarre and Creative Packaging Design Examples Inspiration November 1, 2010 One of the things that identifies the image of a product is its packaging. Few elements like striking graphics, attractive colors, and unusual shapes are carefully thought of to come up with packaging design that catches the attention of the consumers. A packaging design is a critical component in marketing because it is the packaging that makes it stand from the rest when consumers choose a product from the shelf. We usually see the packaging first instead of an innovative product. This post presents the clever and innovative ideas of some of the company manufacturers around the world.

Beecher's "World's Best" Mac & Cheese We came up with this recipe when we opened Beecher's. We wanted to show our customers that you can cook with and eat great cheese every day, and this killer mac and cheese uses two of our cheeses with a background hint of garlic powder and chipotle pepper. We've already won the vote for Seattle's best Mac and Cheese, but the tens of thousands of people a year from all over the world who eat it in our store tell us it's the world's Best. serves 4 as a side dish SAUCE 2 tablespoons unsalted butter 3 1/2 tablespoons all-purpose flour 1 1/2 cups whole milk 7 ounces Flagship cheese, grated (about 1 3/4 cups) 1 ounce Just Jack cheese, grated (1/4 cup) ½ teaspoon coarse salt ¼ to ½ teaspoon chipotle chili powder 1/8 teaspoon garlic powder