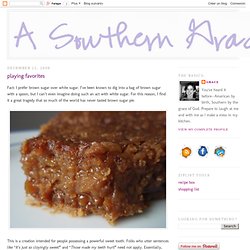 I’ve been known to dig into a bag of brown sugar with a spoon, but I can’t even imagine doing such an act with white sugar. For this reason, I find it a great tragedy that so much of the world has never tasted brown sugar pie. This is a creation intended for people possessing a powerful sweet tooth. Folks who utter sentences like “It’s just so cloyingly sweet!” And “Those made my teeth hurt!” As my grandma (the source and frequent baker of this recipe) can attest, the appearance of the pie that comes out of the oven isn’t always predictable.

Regardless of how it looks, though, one thing remains constant—the flavor. As this recipe has been handed down from my dearest grandmother and definitely counts as a family favorite, I'm sending it along to Lynda of Lynda's Recipe Box for the "Family Recipes: Memories of Family, Food and Fun" event. Brown. Prepare the pie crusts per package instructions, or make up your own favorite dough. A Genius Among Us: Joy's No-Roll Pie Crust. I'm sure you all know Joy the Baker by now, yes? 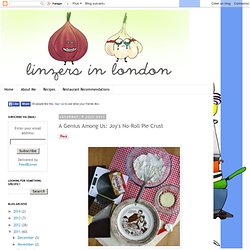 She's the adorably quirky baker/blogger/muser-on-life who brought us such gems as sunflower seed bread, chocolate peanut butter puffs, and these lemon meringue cookies, which I'm dying to try once I don't feel too lazy / I buy a pastry bag. Basically, she's kind of a genius, as well as being so creative it actually makes me sleepy just to read her blog. But sometimes her creativity energizes me, because it encourages my laziness. Enter the no-roll pie crust. This dough doesn't require a lot of work (amazingness, especially for a pie dough); it mostly involves grating frozen butter, manhandling the dough a bit, and lots of greasy fingers. Hot Fudge Pie: What Would Jessie Dish? Week Six.

What exactly is hot fudge pie? 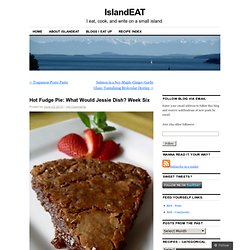 Before I baked this dish, I was not sure about this week’s recipe from my grandmother Jessie’s recently discovered files. One thing for sure was that my grandmother liked hot fudge, chocolate, desserts, and sweets, in general. I recall that she enjoyed a good hot fudge sundae, frequently with coffee ice cream, at the old-fashioned ice cream parlours, which were once common across Chicago. She liked the Ting-a-Ling, very close to her last residence, a near-north-side condo. I imagine Jessie visited many of the south side institutions, e.g., Cunis’s, Cunag’s, Gertie’s, or the original Dove Candies – which has become a superstar of the American-commercial-high-end-ice-cream-bar-and-chocolate scene.

In Key West, Florida in the 1950s, Jessie wrote about what happens from eating too much hot fudge pie and such (on the reverse of the above photo). These techniques indicated one’s personality, we speculated. Oh, right, this post is not about hot fudge sundaes. Recipe: Banoffee "Danger" Pie. Do not adjust your sets - you haven't tuned into the wrong blog. Its still culinarily challenged me but this pie was so amazingly delish I had to share it. We had a chance encounter with its gooey yumminess in Africa. Luckily the camp manager was nice enough to share the recipe. I've made a few slight adjustments to account for American markets. Meet Banoffe "Danger" Pie. Why "danger"? Still with me? 3 bananas 1 tin of sweetened condensed milk 2 cups whipping cream 1 package of digestive biscuits or graham crackers1 stick of butter 1 tsp vanilla 1 small bar of chocolate If you don't mind using store bought ingredients you can cut down a lot on the steps but since I was posting it I figured I would make a proper version entirely from scratch just for you.

Your first step can be done way ahead of time (at least hours but can be as much as months before). After requisite time has passed, take pot off the stove and allow the can to cool. Very PINteresting {desserts} I don’t know about you but pinterest has been such an amazing tool for me! 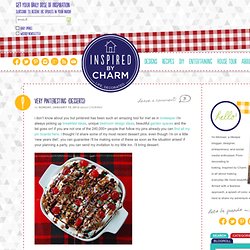 As in innkeeper i’m always picking up breakfast ideas, unique bedroom design ideas, beautiful garden spaces and the list goes on! If you are not one of the 240,000+ people that follow my pins already you can find all my pin boards here. i thought i’d share some of my most recent dessert pins. even though i’m on a little ‘new years diet’, you can guarantee i’ll be making some of these as soon as the situation arises! If your planning a party, you can send my invitation to my little inn. i’ll bring dessert. No Bake Banana Split Pie <-- click link for recipe.Love it cause it’s ‘no bake’, love it more because it’s delicious! Nutella crack pie <-- click link for recipe.yep this looks freaking amazing. nutella = awesome Lemon-Blackberry Cheesecake <-- click link for recipe. Confessions of a (Not-So) Domesticated Newlywed. Happy Halloween! 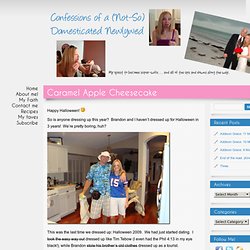 So is anyone dressing up this year? Brandon and I haven’t dressed up for Halloween in 3 years! We’re pretty boring, huh? This was the last time we dressed up: Halloween 2009. We had just started dating. Although we aren’t dressing up, we are looking forward to handing out candy to the neighborhood children. Breakfast: A smoothie made with organic 1% chocolate milk, 1/2 a frozen banana, a little peanut butter, ice, and lots of spinach. Half of a whole-wheat bagel with cream cheese. Morning snack: A pack of almonds + dried apricots.