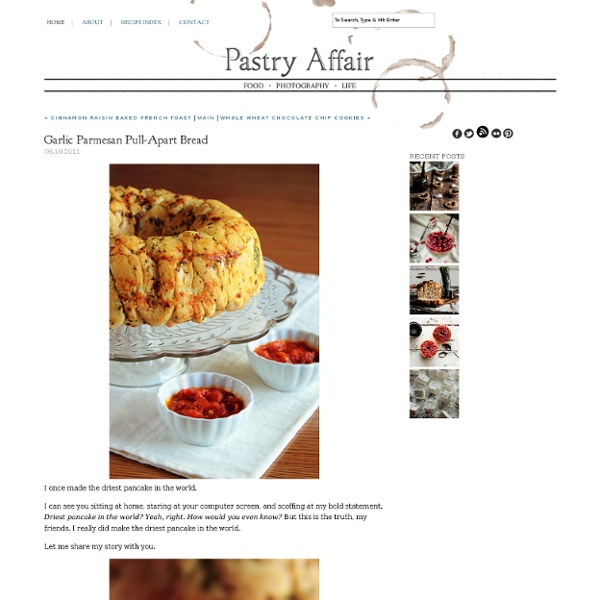 I once made the driest pancake in the world. I can see you sitting at home, staring at your computer screen, and scoffing at my bold statement. Driest pancake in the world? Yeah, right. How would you even know? But this is the truth, my friends. Let me share my story with you. A few years back, I made chocolate chip pancakes. Quickly flash to the next morning. Still cold. Confusion. Was the microwave broken? I got angry, as one will when they want food and want it now. When I took it out, the pancake was slightly less cool. It took me a few hours to realize what had happened. It only stands to reason that my pancake was so utterly dry that there wasn't enough water in it to be absorbed by the microwaves. Thus, the world's driest pancake was born. And to think I took a bite... Luckily, this Garlic Parmesan Pull-Apart Bread is definitely not dry. One Year Ago: Chocolate Orange Miniature Cakes Garlic Parmesan Pull-Apart Bread Yields 1 loaf Punch down the dough.

Petite Lasagnas recipe slightly adapted from Hungry Girl (makes 12) 12 oz raw ground turkey ¼ tsp salt, divided ¼ tsp pepper Watermelon, Meet Lemonade - Blog - food52 - food community, recipe search and cookbook contests - Merrill Last weekend, my sister and some friends threw me a lovely bridal shower. The food was delicious. Happy guests devoured crudités, curried chicken salad, mini grilled cheese sandwiches with bacon, sausage rolls, and homemade currant and ginger scones with clotted cream and raspberry jam. To drink, there was a crisp rosé and a refreshing concoction of fresh watermelon, lemon, sugar and water known as "watermelonade." Bloomin' Onion Bread My husband and I waited tables at Outback Steakhouse while we were in college and ate our share of Bloomin’ Onions. But the funny thing is we never actually ordered them. If a table ordered a Bloomin’ Onion and canceled the order, the onion would sit in the window until another table ordered one which was usually just a matter of minutes. But every once in a while there would be a lull where no orders would come in and the “Bloom” was pronounced “dead”, meaning it would not be served to customers, and all the servers got to eat it. For some reason we always came to work starving so when this happened we ate our little hearts out. I don’t know if there are other servers out there but I still have reoccurring nightmares where I’m in the weeds with all of my table – everyone needs a drink refill and all of my orders are wrong.

The Domestic Mama & The Village Cook Oh baby. Oh yes. You can have your dough and eat it too. No raw eggs here. WOOOOOO~HOOOOO! How to Make Cheese Crackers at Home I love cheese crackers. I try to put the blame on my children as the reason I buy them, but the simple truth is, I buy them for me and the kiddos get the benefit from it. Whether it’s Cheese Nips, Cheez-It’s, Better Cheddars or Goldfish, I like them all. So, when I saw a recipe in the 4 Ingredients Cookbook for cheese crackers, I decided to try it myself. Oh. Watermelonade Recipe at Epicurious photo by Roland Bello yield Makes 1 gallon (serves 16) active time 30 min Chinese Tea Eggs Eggs, how do I love thee? Let me count the ways. I love thee soft-boiled with some kaya toast dipped into the runny yolk. And scrambled with some herbs and melty cheese.

Deep Dish Spinach Pie My kid and husband are big fans of Ina Garten’s Spinach in Puff Pastry recipe. We’ve made it many times making little adjustments along the way. This time turned it into a deep dish pie and my kid went wild. The birthday boy was pretty pleased as well. Cinnamon Toast Rolls The USDA released its new food pyramid the other day (which is actually a plate now instead of a pyramid), and I am sorely disappointed to report that cinnamon rolls did not appear anywhere on that plate. I think by now most of us know what should be on our dinner plate in terms of healthy, well-rounded nutrient-laden meals, but it is my considered opinion that our breakfast plate should include cinnamon rolls now and then. And not just any cinnamon roll, mind you, but how ‘bout a homemade cinnamon roll hybrid that is a cross between a cinnamon roll and cinnamon toast, is super easy to make and gosh darn delicious. In honor of their ancestry, I call these little gems cinnamon toast rolls, and here’s all you need to make them… Yep. That’s it… some soft white bread, some butter and some cinnamon sugar.

pita bread Oh, am I so happy to finally have a great pita recipe. You see, pitas themselves aren’t hard to make. Most recipes very closely, or even exactly, resemble a standard pizza dough and they’re not much more difficult to assemble. Brazilian Lemonade This is my most favorite drink. Ever. Maybe I’d feel differently if I drank (as in alcohol), but there is nothing I love more than a warm, breezy afternoon and a pitcher of Brazilian lemonade. I didn’t try it for a long, long time because I was very put off by putting sweetened condensed milk in with citrus fruit. It seemed very wrong.

Chocolate Cupcakes with Flaming Strawberries Call me easily amused, but these little torch-topped cupcakes delight me. Besides being a cute novelty item for a party, I think they would add a little drama to the end of a romantic meal. I've been looking for something different to serve for Valentine's dessert, and this is definitely different. Homemade Stuffed Pizza Crust Recipe I think there are very few who can vouch and say that they DON'T like Pizza! Its not the healthiest thing to be munching around all the time, but then on occasion when you enjoy it, nothing competes the heartiness and deliciousness of a yummy pizza! I have had my share of pizzas and am at a stage when I can look at a Pizza and not go Ga-ga over it. There is no more salivating or uncontrollable drooling over a dominoes pizza crust. But sometimes on those rare occasions that it does - I need to devour a pizza right then and there. I cannot wait for those 45-60 minutes for the pizza man to arrive!