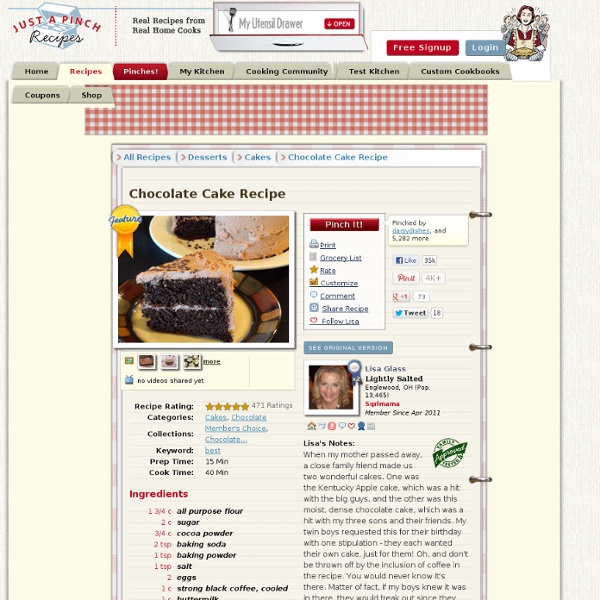 Lisa's notes for this recipe: When my mother passed away, a close family friend made us two wonderful cakes. One was the Kentucky Apple cake, which was a hit with the big guys, and the other was this moist, dense chocolate cake, which was a hit with my three sons and their friends. My twin boys requested this for their birthday with one stipulation - they each wanted their own cake, just for them! Oh, and don't be thrown off by the inclusion of coffee in the recipe. You would never know it's there.

Nutella Mug Cake I have been experimenting with different mug cakes every since I heard about them about a year ago. None of them have been winners. They were either too chewy, too dry, or not sweet enough. Well, I continued experimenting, and thought why not add some decadent Nutella into the mix. I modified the classic mug cake recipe, added Nutella, and a little more milk and oil than I had been using before. CoCo Mi's: Pink Champagne Cupcakes Just in time for Valentine's Day!! I think it's somewhat apparent that I LOVE cupcakes and one of my favorites is Pink Champagne. I'm somewhat lazy so I found a recipe to alter a white cake mix and make it into Pink Champagne. 1 box white cake mix Dessert Recipe: No-Bake Boston Cream Pie Strata Cookbook Recipe But even with making your own homemade pudding from scratch, this recipe doesn't take more than an hour to put together, and then it is all done. Since it needs to be refrigerated before serving, it's the perfect thing to make ahead of time for a dinner party. I love making this the night before a big party, or even the morning of. People always go wild for it. If you want to really take it over the top, you can always make homemade graham crackers too!

Tiramisu Cupcakes The Story #1: If enough people email me to make a recipe for something, I get around to it. But really, these cupcakes were brilliant. They are not an overly sweet cupcake and perfect for a special occasion. Amuse Bouche: Restaurant Style I am going to let you in on a secret. It’s one I carry in my back pocket everywhere I go. I feel even more inclined to tell you this secret after watching last night’s top chef, where it became clear that even some of the greatest minds in the culinary world don’t know it. It’s the very best, most delicious and perfect way to cook a steak. Leave your grill for vegetables, heaven forbid your steak should touch those grates.

Pumpkin Pie Bites I’ve been in a mini-mood lately when it comes to baking and these bite-sized pies met my big craving. They are really, really easy. Let me show ya. Cinnamon Rolls With Whipped Cream Cheese Frosting Happy Friday everyone! Sorry for my lengthy post-valentines day hiatus. The third trimester has made me a little slow in the kitchen and I've had my hands full with family. Like my mother, who was in town last week and thinks a day at the spa is a better use of my time than baking (hey, I'm not going to argue). Then we had Mr.

Cinnamon Swirl Bread I made this bread late at night and poured a glaze on top to intensify it even more. I knew there was a problem before cutting into it because it was sunken in the middle. I found out that the innards of the bread were not fully cooked. I went back to the website to see what others had said about the cake, and they mentioned that the gooey center was the best part, but my cake was a bit too gooey. I heated the cake up more, which caused the sides of the bread to burn even more and the top of the bread to form an extra layer of crust from the glaze I had put on before. Cake Cravings There is a hilarious scene in an episode of Sex and the City where Miranda makes herself a homemade chocolate cake. She starts off by eating one thin sliver of the cake and then walks away. The camera frame doesn't leave the kitchen the entire scene. You see her walk back into the kitchen just seconds later and help herself to another minuscule piece of the sinful treat.

The Finger Test to Check the Doneness of Meat Recipe Print Photography Credit: Elise Bauer There are two basic methods to test for how done your meat is while you are cooking it—use a meat thermometer, or press on the meat with your fingertips. The problem with the meat thermometer approach is that when you poke a hole into the meat with a thermometer, it can let juices escape, juices that you would rather have stay in the meat. Devil’s Food Cake for Design Sponge : Cafe Fernando – Food Blog - biscoff - devil's food cake - Cakes October 30th, 2010 | Category: Cakes, Chocolate I am a big fan of Design Sponge‘s “In The Kitchen With” column. Every Friday, they feature talented cooks, bakers, photographers and food stylists from all around the world and publish a recipe for the rest of us to drool over. So when Kristina asked me if I’d like to contribute a recipe and photos for the column, I was simply floored. Here’s what I came up with: Devil’s Food Cake with Whipped Biscoff Ganache and Chocolate Shards. Moist and fluffy cake layers with a velvety ganache in the middle.

Chocolate Layer Cake with Cream Cheese Frostings  At least once a year, I can count on Quinn taking over the baking in the BoB kitchen. That occasion is my birthday. This year, there was much deliberation on what would be my birthday cake. CopyCat Recipe: Olive Garden Dressing « Because Barenaked Chef said so… I’ve made quite a few “copycat” recipes, most of those not quite up to snuff. The same went for a recent Olive Garden Dressing I made. I should have known when it began with a bottled dressing, but I gave it a try. Finally, I combined a recipe I found with a cruet of Italian Dressing that I prepared from 2 envelopes of Good Seasonings, and I had my dressing! Still don’t get it? Just go below, I’ve combine all the ingredients you will need in one place: