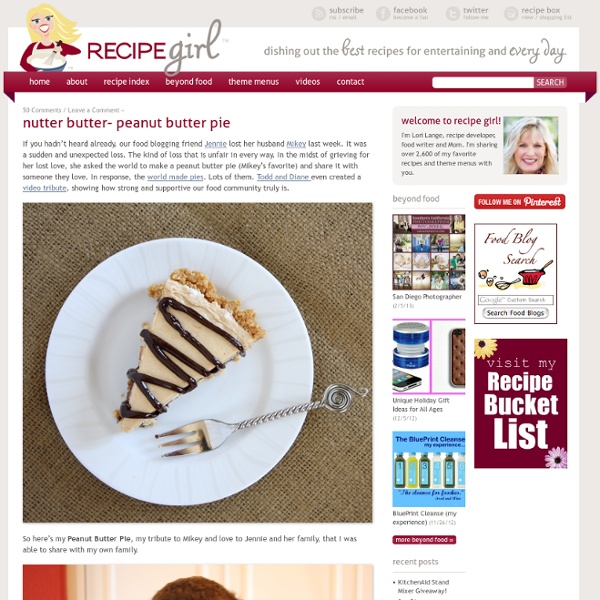 Nutter Butter- Peanut Butter Pie If you hadn’t heard already, our food blogging friend Jennie lost her husband Mikey last week. It was a sudden and unexpected loss. The kind of loss that is unfair in every way. In the midst of grieving for her lost love, she asked the world to make a peanut butter pie (Mikey’s favorite) and share it with someone they love. In response, the world made pies. So here’s my Peanut Butter Pie, my tribute to Mikey and love to Jennie and her family, that I was able to share with my own family. I went with a Nutter Butter crust. If you’re not familiar with Nutter Butters- they’re pretty much just like an Oreo… with peanut butter cookie and peanut butter cream filling. As much as we love Nutter Butters, they had to be smashed into bits for the crust. This is a no-bake, perfect-for-summer kind of pie. A nice layer of hot fudge is then spooned on top. Then it’s topped with the peanut butter cream filling… …and smoothed on top.

Two-Bite Strawberry Hand Pies This post comes to you from damply beautiful Seattle, Washington! Yes, kids, I am in Seattle for BlogHer Food 2012 and not just as an attendee, but I am speaking! I am nervous, but terribly excited, and ready to get the party started! The last month has been a CRAZY travel month for me. First, I went to Camp Blogaway, then I spent 6 days in Tokyo (expect a few Japanese themed recipes in the future – the place is life changing!) Scalloped Hasselback Potatoes “Scalloped” is an attractive word, isn’t it? When I hear it I think of several things: first, there’s scallops, as in the seafood—totally delicious. Then there’s the scalloped shape that can live on the edge of a pair of shorts or on the collar of a woman’s blouse—always pretty and dainty. And of course scalloped potatoes also comes to mind, which carries my imagination to a land of crispy potato skins drenched in a sea of cheese and cream. I can think of no better place to exist, actually.

A bit of nostalgia and some delicious Peach Pie I know it’s the end of October and most people can’t find fresh peaches anymore. But I live in Georgia……and apparently, peaches are in season year round here. Ha. But I was at the grocery store this past weekend and came across a whole pile of locally grown peaches…..all plump and full of color. Oreo Chocolate Chip Cookie Caramel Brownies OMG! It's been awile since I made something new and especially a cake from scratch. It's also been awhile since I've raved about a dessert. This pound cake is AMAZING! Crack Pie Oat Cookie Crust Preheat oven to 350°F. Line 13x9x2-inch metal baking pan with parchment paper; coat with nonstick spray. Combine 6 tablespoons butter, 4 tablespoons brown sugar, and 2 tablespoons sugar in medium bowl. Using electric mixer, beat mixture until light and fluffy, occasionally scraping down sides of bowl, about 2 minutes.

Chocolate Chip Lava Cookies I am so in love with these darn chocolate lava cookies! What is it about a warm, gooey chocolate chip cookie stuffed with decadent, rich, melted chocolate that makes it so irresistible?? Especially when topped with vanilla ice cream. These are one of Kev’s favorite homemade treats, and he usually asks me to make them at least once a week. Broccoli Cheese Soup: Panera Bread Copycat Recipe On Wednesday my sister and I volunteered to make the soup supper to go with the Advent service at church. Before you go thinking I'm some kind of charitable, goodhearted soul, I must tell you that the only reason that I do it is because I LOVE COOKING. In case you hadn't figured that out yet.

Love for Haiti A heavy heart. I have tried not to think about it, actually keeping myself quite busy, but thoughts keep coming back. The complete devastation in Haiti is overwhelming. Campfire Delight: 6-Layer Rich Chocolate Malted & Toasted-Marshmallow Cake - StumbleUpon There’s something about layer cakes that always brings me great comfort–from both making them and eating them. To me, layer cakes are baked bliss, truly. Don’t get me wrong, cupcakes are wonderful; cupcakes are sweet; cupcakes are darling (and perky), but they just aren’t layer cakes. Perhaps part of the glory of layer cakes is the intrigue of what’s beneath all of that swirled frosting, or the wonder of what fills the stacked layers under a perfectly composed exterior. Ever notice how layer cakes will offer one or two little hints as to what’s inside, without giving too much away?

Salt and Vinegar Potatoes with Rosemary There are a million versions of these smashed potatoes all over the place. However, I love the idea of making these a little tangy. I love those thick-cut salt and vinegar chips, which is where the inspiration for this recipe came from. Easy Apple Crumb Cake March 8, 2010 | By Adam Roberts | 23 Comments A lot of people want to know: “Does Craig ever cook for you?” Normally the answer is “no, never, he just likes eating,” but last week the answer became: “Yes, but only when I slice my finger.” I blame the new peeler. Strangely, since moving to this apartment, I’ve lost not one but two peelers.

Making Life Delicious &8482; When I was young and poor, before Jimmer and I got married, we used to entertain ourselves by spending hours in used book stores. Jimmer would search for underpriced collectable books and I would get comfy in the cookbook section. A house, two kids, a cat and a dog later, our lives are quite scheduled. We hardly ever have time for browsing, but a few weeks back we found ourselves in the stacks once again. I made one purchase, a cookbook called “The Great American Bake Sale.” I organize a lot of bake sales for my daughter’s school, so it seemed like a prudent investment.