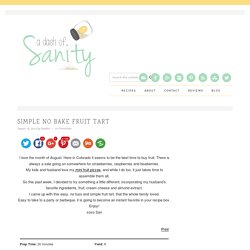 Here in Colorado it seems to be the best time to buy fruit. Buttermilk Pie Recipe. Pear Galettes - Snixy Kitchen. I bribe my friends with baked goods. 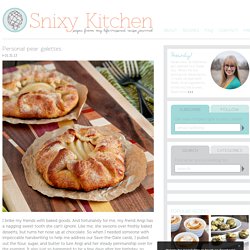 And fortunately for me, my friend Angi has a nagging sweet tooth she can’t ignore. Like me, she swoons over freshly baked desserts, but turns her nose up at chocolate. So when I needed someone with impeccable handwriting to help me address our Save-the-Date cards, I pulled out the flour, sugar, and butter to lure Angi and her steady penmanship over for the evening. It also just so happened to be a few days after her birthday, so these personal pear galettes served a dual purpose.

Win-win. To add icing on the cake, my friend Spike had just inquired about the whereabouts of his Save-the-Date the day before. Blackberry Pie with Oatmeal Crumble Crust « Something Sweet Something Salty. I love doing this blog so much but am still trying to find the secret to balancing my crazy life with the hours it takes me to complete my blog entries. 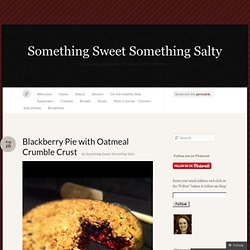 I just told my self that I was going to make a good valiant effort to fit it into my chaos. Thank you every one for continuing to come back to my blog day after day to try my recipes, even though it’s been a while. Today I was noticing that my blog has been viewed in 87 different countries! Is that amazing or what?! Blackberry Cobbler #1. In the coming days and weeks, I’m going to be blowing the lid off the international debate about cobbler. 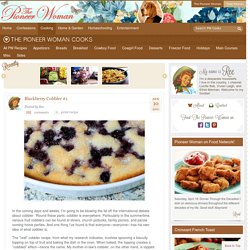 ‘Round these parts, cobbler is everywhere. Particularly in the summertime, various fruit cobblers can be found at diners, church potlucks, family picnics, and parole coming home parties. And one thing I’ve found is that everyone—everyone—has his own idea of what cobbler is. The "real" cobbler recipe, from what my research indicates, involves spooning a biscuity topping on top of fruit and baking the dish in the oven.

Blackberry Cobbler #2. We’ve already examined one version of blackberry cobbler, which happens to be my favorite. 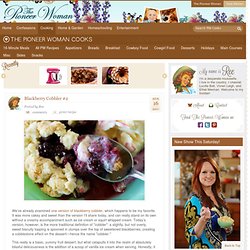 It was more cakey and sweet than the version I’ll share today, and can really stand on its own without a creamy accompaniment such as ice cream or squirt whipped cream. Today’s version, however, is the more traditional definition of "cobbler": a slightly, but not overly, sweet biscuity topping is spooned in clumps over the top of sweetened blackberries, creating a cobblestone effect on the dessert—hence the name "cobbler. " This really is a basic, yummy fruit dessert, but what catapults it into the realm of absolutely blissful deliciousness is the addition of a scoop of vanilla ice cream when serving. Blackberry Cobbler Recipe. You can use fresh or frozen blackberries for this cobbler. 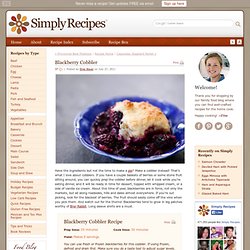 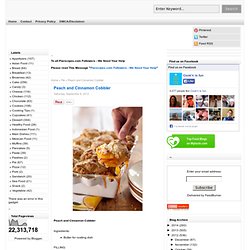 For the topping, in a food processor or large bowl, pulse or whisk together the 1 2/3 cups flour, the sugar, baking powder, and salt. Mixture resembles coarse crumbs. Evenly arrange the dough rounds on top of the filling. Cottage Cheese Pie. Apple Crisp Pizza. My husband’s favorite dessert is a warm apple crisp with a huge scoop of vanilla ice cream. 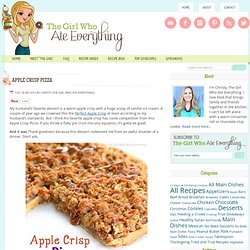 A couple of year ago we crowned this the Perfect Apple Crisp at least according to my husband’s standards. But I think his favorite apple crisp has some competition from this Apple Crisp Pizza. If you throw a flaky pie crust into any equation, it’s gotta be good. And it was.Thank goodness because this dessert redeemed me from an awful disaster of a dinner. Don’t ask. Peach and Blueberry Crumble. Apple and Rhubarb Pie. As the days grow colder it’s hard to resist the allure of comforting winter desserts, such as these Apple and Rhubarb Pies. 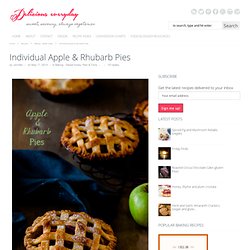 Luckily winters here in Brisbane are relatively mild, but growing up in Tasmania I loathed the long cold winters. Especially the winters while I was at university. After my first year of university I started a full time job as an undergraduate accountant and continued university part time. Strawberry Rhubarb Crisp. Chris • shared appetite Rhubarb. 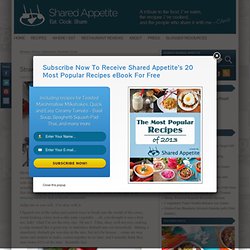 It’s a word that we all hear over and over this time of year. There’s no escaping it. Rhubarb this. Rhubarb that. Cinnamon Bun Pecan Pie Recipe. Pie season is here–are you ready? Summer Berry Crumble with Homemade Vanilla Ice Cream. Hi, happy new week! I had kind of a rough week last week and to add insult to injury my usual preferred form of therapy (baking) wouldn’t go right either. Butterfinger Pie Recipe.