Inside Out Apple Pies 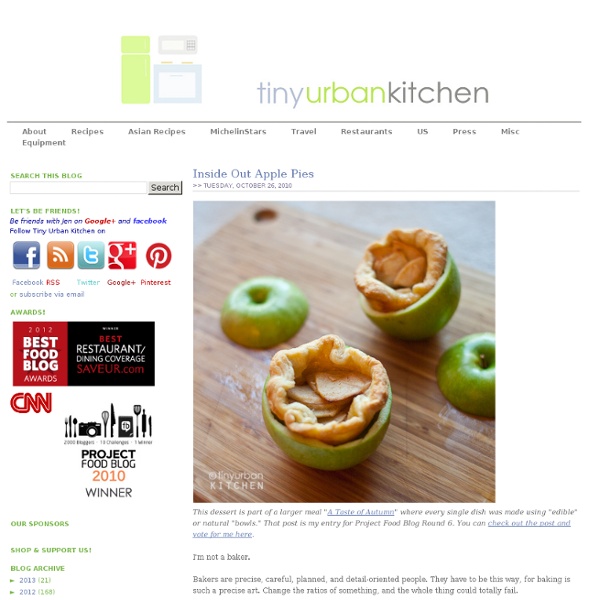 This dessert is part of a larger meal "A Taste of Autumn" where every single dish was made using "edible" or natural "bowls." That post is my entry for Project Food Blog Round 6. You can check out the post and vote for me here. I'm not a baker. Bakers are precise, careful, planned, and detail-oriented people. I'm more of a throw-it-all-together-without-measuring type cook, which can often lead to failures if you're trying to get cake to be a certain texture, a crust to be flaky, or dough to rise properly. This was my first time ever making any pie from scratch. This recipe is a twist on the traditional apple pie because it's sort of an inverted apple pie. The Crust Your goal in a pie crust is to make a flaky crust. The key is to use really cold butter - like frozen butter. At this point you use your hands and try to form a ball with the mixture. The next day (or, an hour later), roll out the dough until it's about 1/8 inch thick. The Apples Meanwhile, slice up apples. The Outer Apple Related:  PIES & TARTS

Pie | Joe Pastry I have to admit, these Melton Mowbray-style pork pies aren’t just something you throw together, but for the serious pork pie enthusiast they are well worth the time and effort. To make them the old-fashioned way you’ll need an old-fashioned piece of equipment called a pie dolly plus some rendered leaf lard, for without good quality lard the side walls of the pie won’t stand up in the oven. Oh yes friends, these pies are baked free-standing, didn’t you know? Forms are for sissies. At least they are in Melton Mowbray. That said you absolutely can adapt this recipe to more conventional ingredients and equipment. On day one you’ll need to make your hot water dough and let it chill for at least four hours or overnight (which is better). When you’re ready to shape, make your filling. Pulse until the meat is chopped well, but no further. Produce your pie dolly and a round cutter (from a cutter set) that’s a bit larger than the circumference of the dolly. They look good to me! Cheers!

Lua Los Angeles: pie x 3 . chocolate cream, old-fashioned pumpkin, and coconut cream One pie is good. Three is even better. After missing my golden opportunity to enter my pies into the Malibu pie contest last week, which I fervently declared I would challenge earlier this year, I was feeling up to a challenge. These pies are my ammo and yes, I'm coming for you next year pie contest. Being the over-achiever that I am, one pie was not going to cut it. Last, I chose pumpkin because one it goes with the season and I knew it would be a nice alternative to the other sweet and rich cream pies. Now, while I love pie, I have decided that I don't like: 1: Toasting coconut in the oven to a perfect golden brown, not burning the coconut (which happens easily, fyi), while holding a wire whisk and whisking cream constantly (which means don't stop- you don't want to scald the cream) in a pan over medium heat until i have lost all feeling in my arm 3: Creating the perfect pie crust , only to assemble it haphazardly, watch it break into pieces and have to patch it completely back together.

Seriously good heart-healthy apple pie - Guest Chef After heart problems forced me to stop eating saturated and trans fats, I thought I would never make or eat pie again (and believe me, I cried myself to sleep over that one). Then I saw a crust recipe in Saveur made with white flour, vegetable oil and whole milk. The old Cathy would have scoffed at this idea, but I had to give it a try – especially considering that a pie with this crust won the Iowa State Fair pie contest! I gave the recipe a bit of a health makeover by using half whole wheat pastry flour, plus organic canola oil and fat-free milk. The result was shockingly good, and I was a Pie Queen once again. Don’t be skeptical, you butter lovers. 1. 2. 3. Heart-Healthy Apple Raspberry Pie Ingredients Filling 5 cups peeled, thinly sliced apples (about 5 apples) 1 tablespoon lemon juice 1/8 teaspoon cinnamon 1/8 teaspoon freshly ground nutmeg 2/3 cup sugar 3 tablespoons cornstarch 2 1/2 cups fresh raspberries (about 12 ounces) Crust Directions Preheat your oven to 400 degrees.

Brownie Pie | The Family Kitchen The first time I had brownie pie was about ten years ago. One of my friend’s had brought it to a gathering, and everyone loved it. It was a very simple recipe though. For her pie, she just used brownie mix in a store-bought pie shell. It was good, but I knew I could improve on it. Brownie Pie Recipe Ingredients pre-made roll out or homemade pie crust 1/2 cup flour 1 stick butter, or 1/2 cup, melted 1/2 cup cocoa powder 3 eggs 1/2 cup white sugar 1/2 cup dark brown sugar 1/4 teaspoon salt 1 teaspoon vanilla Topping 1/2 cup chopped pecans, roasted 1/3 cup chocolate chips (milk or dark chocolate) pre-made jarred caramel sauce, warmed Method 1. 2. 3. 4. More decadent desserts you might like:

Homemade Buttery Flaky Pie Crust Baked Apple Dumplings For me, settling into Fall is generally triggered by three things…leaves changing color, brisk cool air, and an inexplicable craving for apples. So, naturally, I have yet another yummy recipe for apple goodness. As my husband states here there is an “unmistakable briskness that now ever-so-subtly hangs in the air.” Sigh…I don’t even want to imagine what that “briskness” is threatening in the next few months. But, as long as beautiful Fall weather is here to stay for a little while, I am going to enjoy it while it lasts. This weekend we are planning on doing some pumpkin carving. Baked Apple Dumplings Ingredients: 2 small apples – cored and paired1 ready made pie crust3/4 cup sugar3/4 cup water3-4 drops red food coloring1/4 teaspoon ground cinnamon1/4 teaspoon ground nutmeg3 tablespoons unsalted butter Preparation: The Fresh Fridge Tip: For the best results, use either Granny Smith or Honeycrisp Apples.

Baking Basics: Homemade Buttery Flaky Pie Crust. - Sallys Baking Addiction Bakers! Welcome back to my Baking Basics series. This is a very long post. It’s summer. There is nothing more satisfying than making a pie completely from scratch. Let me help you get there. As the base holding all of the pie’s contents, pie crust’s flavor is in every single bite. About The Ingredients This crust is made with a few simple ingredients: flour, salt, cold water, and fat. Start with quality flour. What does this mean? A gluten free pie crust, you ask? Next up in my pie dough: salt. Now, the final ingredient(s). Why I Use Shortening and Butter Not all fats are created equal. A Tasty Experiment I recently performed an experiment. The all-butter crust tasted like pure butter. Use Cold Fat Why the emphasis on temperature? I keep some of my butter in the freezer and transfer it to the refrigerator a few hours before beginning the crust. Tips + Recipe (Print-friendly recipe below!) Start with flour and salt in a large bowl. Next: ice water. Vodka? Speaking of liquids. Back to my recipe.

Mini Fruit Pies ? Simple Organized Living I love pie. I love eating pie, I love making pie, I love nearly all vartities of pie! The only problem with pie is that the crust always seems to get soggy before we can eat it all — there are just 2 of us you know. So today — as I was contemplating whether or not I should make a pie (and knowing that my husband would definitly want me to make a pie) — I decided to try something new… … mini pies! I figured that if I made mini pies, I could make as many as we needed and I could customize the filling so everyone got their favorite pie. Not sure why I didn’t think of this sooner? Anyway, mini pies are extremely easy and take less than 20 minutes to bake (half that of most full pies) Ingredients: Pie Crust Dough — I used store bought refrigerated crust but feel free to use homemadeFilling — choose your favorite pie fillings and make mini batches of each one (or use canned filling) Directions: Use a biscuit cutter to create mini pie crusts — cut as many or as few as you want What is your favorite pie?

The Great Pumpkin Pie Recipe. - Sallys Baking Addiction Bursting with flavor, this pumpkin pie recipe is my very favorite. It’s rich, smooth, thick, and tastes incredible on my homemade pie crust and served with whipped cream. Pumpkin pancakes, pumpkin cookies, pumpkin lattes, pumpkin cupcakes, pumpkin bread, but HELLO what about pumpkin pie?? My Great Pumpkin Pie Recipe. Is Here. I spent the majority of my incredibly awesome week last week testing pumpkin pie recipes. But I think I cracked the pumpkin pie code. Just me? Since this is such a classic recipe, I snapped a lot of pictures of the process as well as the finished products. The pie crust. The pumpkin. The mighty ingredient in pumpkin pie, besides the pumpkin, are the eggs. Gloppy is the best word I can think of right now. A starch thickener is one of the most important ingredients in a pie filling. My Secret Ingredient This sounds so incredibly weird. These pie crust leaves! And let’s not forget about the sugared cranber… I mean crannies. And the whipped cream. Print Recipe Ingredients:

Easy-to-Prepare Oil Pie Crust Recipe Pie crust without shortening or butter? Who would think possible? A pie crust using oil instead is not only a nice change from the usual, but is also much easier to make--you don't need a pastry blender or a rolling pin. This is a perfect pie crust recipe for beginner bakers or anyone intimidated by having to cut shortening into the flour. It's also a great option when you find yourself out of shortening! Although the dough is most versatile when made with a mild-flavored oil like vegetable, canola, safflower or peanut, you could use extra virgin olive oil, but it is best with a savory pie like a quiche.