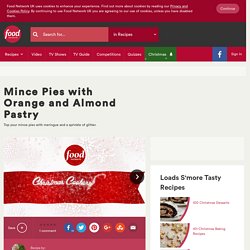 Make the pastry by putting all the ingredients, except the orange juice, into a food processor and whizz until it resembles breadcrumbs. Now add 3 tablespoons of the orange juice and whizz until the dough comes together into a ball. Remove, wrap in cling film and leave to chill in the fridge for 1 hour. Roll out two-thirds of the pastry on a floured board to a 3mm thickness. Cut 12 circles out with a 7.5-9cm fluted cutter. Mix the mincemeat, amaretto and orange zest together then spoon a little mincemeat into each pastry case, but don’t overfill them. You now have three options to top them. 1) Cover the tops with a pastry lid and bake for 15-20 minutes until golden brown then sprinkle with edible glitter. 2) To cover 6 in a cranberry glaze, mix together 4 tbsp of cranberry jelly and 100g of roughly chopped roasted hazelnuts.

Mince pies. Mince pies. Unbelievably easy mince pies. 6 Mince Pie Recipes You'll Definitely Need This Christmas. Mince Pies - Raymond Blanc OBE. When it comes to Christmas I have totally embraced so many of the British traditions and one of my favourites is the classic mince pie. 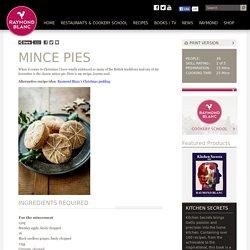 Here is my recipe, Joyeux noel. Planning ahead The mincemeat may be made 1 month in advance. The pies may be made and frozen, then cooked when needed. Or once cooked, they will keep in an air-tight tin for 5 days; just pass them through the oven to freshen the pastry before serving. For the mincemeat Mix all the ingredients together, stir well and refrigerate until needed.

For the sweet shortcrust pastry Mix together the butter and icing sugar until they are completely blended. Food - Recipes : Paul Hollywood’s mince pies. Mince pies. Food - Recipes : Mince pies. Unbelievably easy mince pies. Traditional Mince Pies - Mincemeat Recipes. Return to listing I will always cherish fond memories of my mother's and my grandmother's cooling trays piled high with freshly baked mince pies on Christmas Eve, ready to be packed into tins and brought out whenever friends popped in for Christmas drinks. 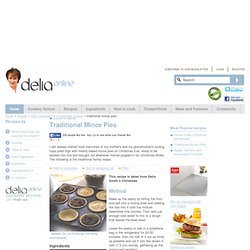 The following is the traditional family recipe. Makes 24 (18 if using 1lb/450g mincemeat) This recipe is taken from Delia Smith’s Christmas. Make up the pastry by sifting the flour and salt into a mixing bowl and rubbing the fats into it until the mixture resembles fine crumbs. Leave the pastry to rest in a polythene bag in the refrigerator for 20-30 minutes, then roll half of it out as thinly as possible and cut it into two dozen 3 inch (7.5 cm) rounds, gathering up the scraps and re-rolling. Then do the same with the other half of the pastry, this time using the 2½ inch (6 cm) cutter. Mary Berry. I prefer the flavour of butter to suet in mincemeat – which makes it suitable for vegetarians – but use suet if you wish. 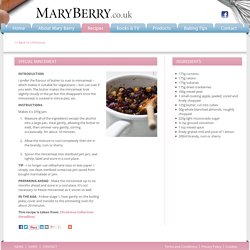 The butter makes the mincemeat look slightly cloudy in the jar but this disappears once the mincemeat is cooked in mince pies, etc. Makes 4 x 370g jars Measure all of the ingredients except the alcohol into a large pan. Heat gently, allowing the butter to melt, then simmer very gently, stirring occasionally, for about 10 minutes.Allow the mixture to cool completely then stir in the brandy, rum or sherry.Spoon the mincemeat into sterilised jam jars, seal tightly, label and store in a cool place. TIP - I no longer use cellophane tops or wax paper. PREPARING AHEAD - Make the mincemeat up to six months ahead and store in a cool place. IN THE AGA - Follow stage 1, heat gently on the boiling plate, cover and transfer to the simmering oven for about 20 minutes. This recipe is taken from: Christmas Collection (Headline) Home-made Christmas Mincemeat - Mincemeat Recipes. You can buy some very good mincemeat, but when it is home-made it really is in another league, and once you make it yourself, you'll never look back. 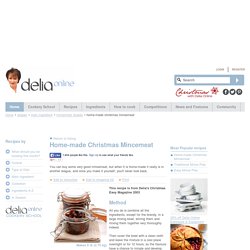 Makes 6 lb (2.75 kg) This recipe is from Delia's Christmas Easy Magazine 2003 All you do is combine all the ingredients, except for the brandy, in a large mixing bowl, stirring them and mixing them together very thoroughly indeed. Then cover the bowl with a clean cloth and leave the mixture in a cool place overnight or for 12 hours, so the flavours have a chance to mingle and develop. Traditional mincemeat. Homemade Mincemeat - Christmas Mincemeat Recipe. Food - Recipes : Mincemeat streusel.