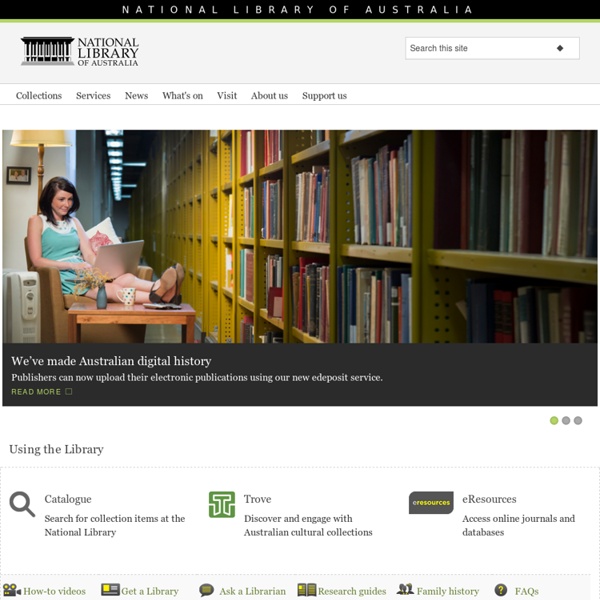 Collections in Melbourne: A Guide to Commonwealth Government Records - Collections in Melbourne: A Guide to Commonwealth Records Celia Blake Published by the National Archives of Australia This is guide number 8 in the series of research guides published by the National Archives. The Melbourne office of the National Archives of Australia holds a wealth of material that will interest both professional and family historians. Welcome to the BnF The Bibliothèque nationale de France collects, preserves and makes known the national documentary heritage. The BnF’s collections are unique in the world: 14 million books and printed documents, manuscripts, prints, photographs, maps and plans, scores, coins, medals, sound documents, video and multimedia documents, scenery elements... All disciplines, whether intellectual, artistic or scientific, are represented in a comprehensive way. About 150 000 documents are added to the collections each year thanks to legal deposit, acquisitions and donations. Today, the BnF’s digital library, Gallica, provides access to over three millions documents.

1 Historical background Recognising Aboriginal and Torres Strait Islander Peoples in the Constitution: Report of the Expert Panel Millions of non-indigenous Australians have joined with us in the search for a better relationship based on equity and justice. Australians at every level of our society have put up their hands to be counted as supporters of a nation that holds as its core value a society based on mutual respect, tolerance and justice. ... I am convinced that true reconciliation that is not based upon truth will leave us as a diminished nation. And I ... am convinced that such reconciliation is possible.

The Public Library as an Incubator for the Arts Arguably, those who believe a public library is simply a repository of print books haven’t been to a public library lately. Here at MindShift, we’ve been covering the ways in which the library is evolving to change the demands of digital technologies and of its patrons: libraries are becoming learning labs, innovation centers, and makerspaces. Of course, the public library has always been a community center as much as a place to go to check out books to read, so the new extensions of the library’s service may not be so far afield from the institution’s mission to provide access to information. Even so, much of the emphasis has been on literacy — reading and writing, digital and analog — and not on other forms of creativity.

The five funniest moments in Australian history History, let's be blunt, is hilarious. It's hilarious for the same reason life itself is hilarious: it's filled with weirdos and idiots screwing everything up in the worst ways possible. But the beauty of history as a comedic resource is that it all happened ages ago, so you don't have to pretend to feel sorry for the people it happened to. Down the library path Bernadette Bennett, Kerry Gittens, and Lynette Barker When you are working with like-minded people sometimes the planets align and between you clarity can be achieved. The Hunter region has always had a strong professional body of Teacher Librarians (TL), gathering in small groups by region, education sector, and at the annual MANTLE conference. In 2006, the Hunter's TLs at the local Diocesan schools formed a group to create a Diocesan Information Skills strategy and accompanying programming guide that would provide consistency across the Diocese.

Worst mass murder of police in Australian history remembered Updated Police have gathered in a remote forest near the southern New South Wales town of Braidwood to mark 150 years since the worst mass murder of police officers in Australian history. On January 9, 1867, four special constables assigned to catch the notorious Clarke Gang were ambushed and killed near Jinden, New South Wales. What the news media can learn from librarians Photo by Rich Grundy We can all agree it’s been a rough season for the news media. Hostile political crowds, accusations of slander, and struggles with what Guardian editor Katharine Viner has called the “waning power of evidence” and “diminishing status of truth.” Today more than ever, the news media’s role as a mediator and gatekeeper of civic discourse is being questioned. Jeffrey Rutenbeck, American University’s Dean of the School of Communication, voiced what many are feeling when he observed in a recent Knight Foundation report, “Journalism has had the luxury of not having to ask itself the existential question of why anyone should pay any attention to us at all.”

theconversation The relationship between European settlers and native Australian foodstuffs during the 19th century was a complex one. While the taste for native ingredients waxed and waned for the first century of European settlement, there’s ample evidence to demonstrate that local ingredients were no strangers to colonials’ kitchens or pots. British settlers needed to engage with the edible flora and fauna of the continent almost immediately upon arrival. The journals of First Fleet officers record not only their reliance on native food, but the relish with which they enjoyed it. For example, First Fleet surgeon George Worgan noted in his diary a feast held to celebrate the King’s birthday: We sat down to a very good Entertainment, considering how far we are from Leaden-Hall Market, it consisted of Mutton, Pork, Ducks, Fowls, Fish, Kanguroo, Sallads, Pies & preserved Fruits.

Framework for Information Literacy for Higher Education Filed by the ACRL Board on February 2, 2015. Adopted by the ACRL Board, January 11, 2016. This work is licensed under a Creative Commons Attribution-NonCommercial-ShareAlike 4.0 International License. PDF Version Why did the great journey's of exploration occur? In this part of your course you are investigating some of the great explorations in world history. During the fifteenth and sixteenth centuries there was a great outbreak of exploration from Europe to unknown areas of the world. Why did this happen?

RDA new cataloguing rules Why new rules, and what has it got to do with me? Resource Description and Access (RDA) is the cataloguing standard being introduced to replace Anglo-American Cataloguing Rules, second edition (AACR2). National Library of Australia has announced that it will implement RDA in early 2013 (Australian Committee on Cataloguing n.d.). RDA will initially impact on cataloguers, and in the longer term will shape how end users of catalogues and discovery systems find the information they require. Therefore it is important for all people working in the library and information industry to have some understanding of the purpose of RDA and its implications for the library catalogue. Cataloguing standards