Another Take on Autistic Cultural Compentency. By Lydia Wayman In William Stillman’s February, 2014 article on the Huffington Post titled Autism: A New Cultural Competency, Stillman uses the term Autism Cultural Competency to refer to the idea that the time has come for our culture to build its competence in how it approaches autistic people. 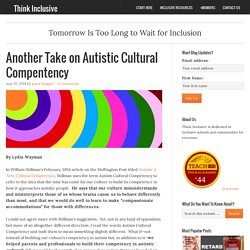 Free Stuff for Adults with Disabilities (and/or Special Needs) ABA and the Thorny Problem of Control and Consent. Editor’s Note: This post was originally written for a Canadian audience but the information is still relevant for the United States and other parts of the world. 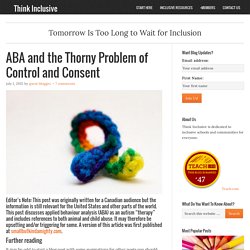 This post discusses applied behaviour analysis (ABA) as an autism “therapy” and includes references to both animal and child abuse. Five ways to damage autistic children without even knowing. Yep, uncomfortable title. 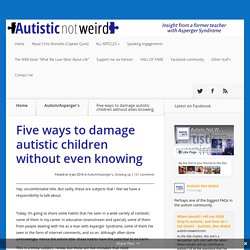 But sadly, these are subjects that I feel we have a responsibility to talk about. Today, I’m going to share some habits that I’ve seen in a wide variety of contexts: some of them in my career in education (mainstream and special), some of them from people dealing with me as a man with Asperger Syndrome, some of them I’ve seen in the form of internet comments, and so on. Although often done unknowingly- hence the article title- these habits have the potential to do harm. This is a tricky subject, I know, but these are five mistakes that need discussing. You’d be surprised how easy it is to make them. Rather importantly, this is not specifically a guide for parents. Ok, deep breath. Compliance / Social Skills / ABA / Indistinguishability Resources. Parenting Autistic Children With Love & Acceptance Change the world, not your Autistic child! 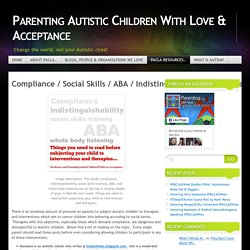 Compliance / Social Skills / ABA / Indistinguishability Resources Image description: The words Compliance, indistiquishability, social skills training, ABA, and whole body listening are at the top in varying shades of gray. In Red the text reads: Things you need to read before subjecting your child to interventions and therapies… Why a Transcript is Not Enough to Make Videos Accessible. If you want to make your online videos accessible to people with disabilities, you’ll need more than just a video transcript.Transcripts are adequate to make audio content accessible to deaf or hard-of-hearing users, but videos need closed captions and video description to be fully accessible to everyone. 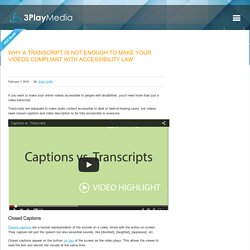 Closed CaptionsClosed captions are a textual representation of the sounds on a video, timed with the action on screen. They capture not just the speech but also essential sounds, like [doorbell], [laughter], [applause], etc.Closed captions appear on the bottom (or top) of the screen as the video plays. Rev. Cyn: Standing, Rolling, Dancing, Singing, Praying, Preaching, Acting on the Side of Love. At our the preceding Ministry Days preceding the UU General Assembly, ableist language was used in worship to the extent that UUMA Board Member Josh Pawelek issued this response: Clearly there is a problem with ableism in our public presentation. 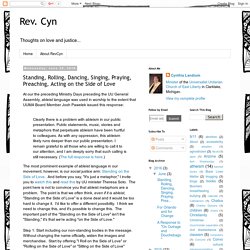 Public statements, music, stories and metaphors that perpetuate ableism have been hurtful to colleagues. As with any oppression, this ableism likely runs deeper than our public presentation. I remain grateful to all those who are willing to call it to our attention, and I am deeply sorry that such calling is still necessary. (The full response is here.)

They Said She Wasn't Ready (four times) This post tells of the obstacles that we faced when we decided to pursue high tech AAC for Maya, and the ways that it has shaped her academic path. 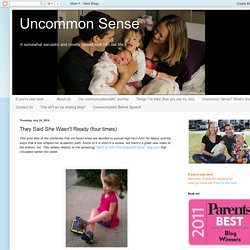 Some of it is kind of a review, but there's a great new video at the bottom, too. This relates directly to the (amazing) "Myth of AAC Pre-Requisite Skills" blog post that circulated earlier this week. My introduction to AAC came in a support group meeting (for parents of kids with special needs). I was talking about how I really didn’t know what Maya knew, or understood, and how I wish I could find a way for her to communicate.

One of the moderators said “You should go see Mark, he does assistive tech” and the other nodded and agreed, and that night I went home and started researching and was blown away by the different systems and devices (and a very small number of apps) that were out there: a whole world that I didn’t know about. ‘Finding Dory’ and ‘Finding Nemo’ change the way we see disability. Dory (Ellen DeGeneres), the regal tang at the center of ‘”Finding Dory.” 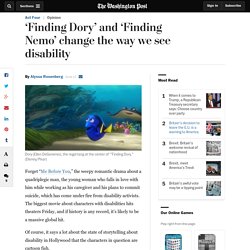 (Disney/Pixar) Forget “Me Before You,” the weepy romantic drama about a quadriplegic man, the young woman who falls in love with him while working as his caregiver and his plans to commit suicide, which has come under fire from disability activists. The biggest movie about characters with disabilities hits theaters Friday, and if history is any record, it’s likely to be a massive global hit. Of course, it says a lot about the state of storytelling about disability in Hollywood that the characters in question are cartoon fish. But the entertainment industry’s larger failings in no way diminish “Finding Dory,” the sequel to the 2003 Pixar smash “Finding Nemo.” It’s easy to read both films broadly as stories about parents learning to trust their children; for all their charming specificity, Pixar movies are designed to tug heartstrings as widely as possible.