Library- Keeping Your Library Relevant, Viable, Transformative & Essential In Your School (and Making Sure Everyone Knows It!) - Google Slides. Canadian Library Association. World Libraries. Abstract Although a popular focus for librarians, advocacy is often misunderstood and rarely evaluated. 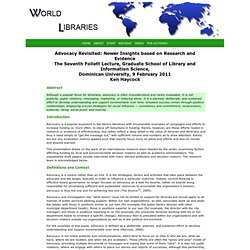 It is not publicity, public relations, messaging, marketing, or lobbying alone. It is a planned, deliberate, and sustained effort to develop understanding and support incrementally over time. Greatest success comes through positive relationships, employing proven strategies for social influence — consistency and commitment, reciprocation, authority, liking, social proof, and scarcity. Introduction Advocacy is a popular buzzword in the library literature with innumerable examples of campaigns and efforts to increase funding or, more often, to stave off reductions in funding. This presentation draws on the work of an international research team headed by the writer, examining factors affecting funding by local and provincial/state decision–makers as well as academic administrators. Definitions and Context Advocacy is a means rather than an end. What Do We Know? What Works.

New Value of Libraries Megapost. I have been pulling together all of my posts on studies and reports on the value of public libraries for my work with the Federation of Ontario Public Libraries. 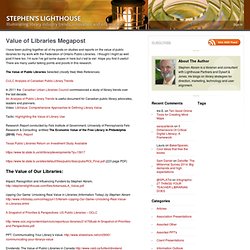 I thought I might as well post it here too. I’m sure I’ve got some dupes in here but c’est la vie! Hope you find it useful! There are many useful talking points and proofs in this research. The Value of Public Libraries Selected (mostly free) Web References: Library Services in the Digital Age. Released: January 22, 2013 By Kathryn Zickuhr, Lee Rainie and Kristen Purcell The internet has already had a major impact on how people find and access information, and now the rising popularity of e-books is helping transform Americans’ reading habits. 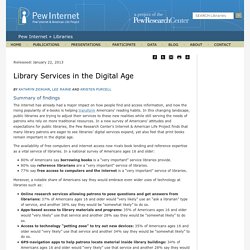 In this changing landscape, public libraries are trying to adjust their services to these new realities while still serving the needs of patrons who rely on more traditional resources. In a new survey of Americans’ attitudes and expectations for public libraries, the Pew Research Center’s Internet & American Life Project finds that many library patrons are eager to see libraries’ digital services expand, yet also feel that print books remain important in the digital age. How Americans Value Public Libraries in Their Communities. Released: December 11, 2013 By Kathryn Zickuhr, Lee Rainie, Kristen Purcell and Maeve Duggan Americans strongly value the role of public libraries in their communities, both for providing access to materials and resources and for promoting literacy and improving the overall quality of life. 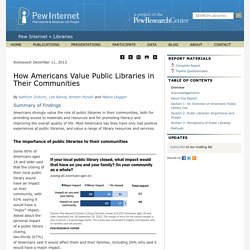 Most Americans say they have only had positive experiences at public libraries, and value a range of library resources and services. The importance of public libraries to their communities Some 90% of Americans ages 16 and older said that the closing of their local public library would have an impact on their community, with 63% saying it would have a “major” impact. Beyond the Bullet Points: It is Time to Stop Trying to Save Libraries. Close the crisis center. 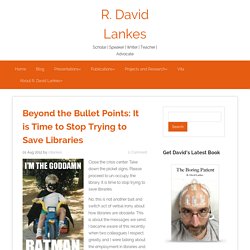 Take down the picket signs. Please proceed to un-occupy the library. Get your geek on. Support the library. Tales from a Loud Librarian: 100 Things Kids Would Miss without School Librarians. 28 Beautiful Quotes About Libraries. Infographic: Monthly Library Report. “Hello. 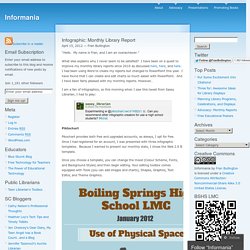 My name is Fran, and I am an overachiever.” What else explains why I never seem to be satisfied? I have been on a quest to improve my monthly library reports since 2010 as discussed here, here, and here. I had been using Word to create my reports but changed to PowerPoint this year. I have found that I can create and edit charts so much easier with PowerPoint. Advocacy Dropbox. Transitions to Digital Media. If your school librarians are feeling beleaguered these days, well, they have good reason. 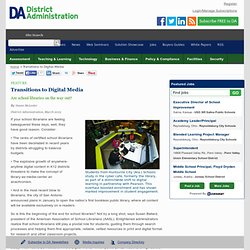 Consider: • The ranks of certified school librarians have been decimated in recent years by districts struggling to balance budgets. • The explosive growth of anywhere-anytime digital content in K12 districts threatens to make the concept of library-as-media-center an anachronism. • And in the most recent blow to librarians, the city of San Antonio announced plans in January to open the nation’s first bookless public library, where all content will be available exclusively on e-readers. So is this the beginning of the end for school libraries? And the role of information navigator is becoming ever-more important. 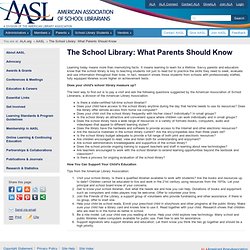 It means learning to learn for a lifetime. Savvy parents and educators know that the school library is key to teaching students not just to read but to practice the skills they need to seek, evaluate and use information throughout their lives. In fact, research shows those students from schools with professionally staffed, fully equipped libraries score higher on achievement tests.