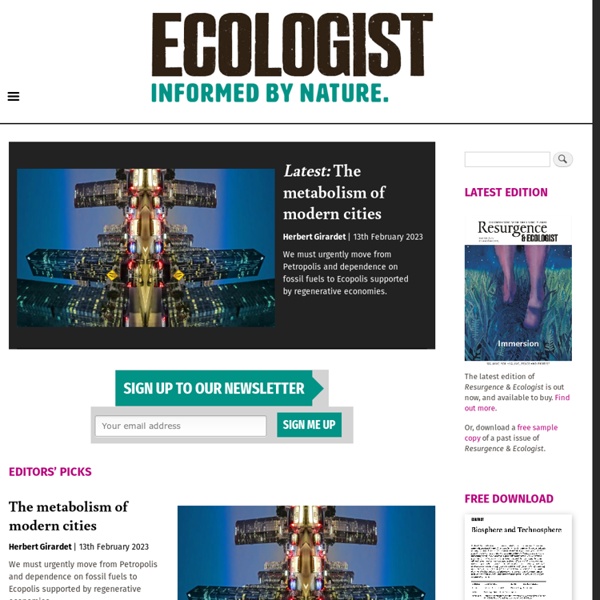 The Green MP for Brighton, Caroline Lucas, and four other protestors have been found 'not guilty' by Brighton magistrates on charges of obstructing the highway and other public order offences at a 2013 anti-fracking protest. 'The fight goes on!' Read More... Federal Agencies have capitulated to an armed militia protecting a Nevada rancher running his cattle on 100s of 1,000s of acres of public land reserved for 'threatened' Desert tortoises - despite multiple court orders and over $1 million in unpaid fines. Read More... There are now more than 400,000 electric cars on the world's roads - twice as many as a year ago, and on current trends there will be a million by 2016.

August 26, 2014: Do we live in a 2-D hologram? Press Release August 26, 2014 Do we live in a 2-D hologram? New Fermilab experiment will test the nature of the universe HotWhopper: The perversity of deniers - and the "pause" that never was with Tom Peterson Below is a TedX talk from Dr Tom Peterson on "What is Science: How it Differs from Art, Law and Quackery": Tom quoted Stephen Jay Gould, Harvard geologist, from the video (which provided the title for this article): Science does not deal in certainty, so "fact" can only mean a proposition affirmed to such a high degree it would be perverse to withhold one's provisional assent. What follows is copied from a comment posted here at HotWhopper, from Tom Peterson of NOAA, co-author of the new paper in Science, and President of the WMO Commission for Climatology.

Greta Thunberg, the Fifteen-Year-Old Climate Activist Who Is Demanding a New Kind of Politics Sometimes the world makes so little sense that the only thing to do is engage in civil disobedience—even in a country as attached to its rules and regulations as Sweden is. Fifteen-year-old Greta Thunberg has been protesting for more than a month. Before the country’s parliamentary election on September 9th, she went on strike and sat on the steps of the parliament building, in Stockholm, every day during school hours for three weeks. Since the election, she has returned to school for four days a week; she now spends her Fridays on the steps of parliament. She is demanding that the government undertake a radical response to climate change.

Generation Anthropocene Special Announcement (04 June 2013) The producers of Generation Anthropocene – Mike Osborne, Miles Traer, and Leslie Chang – are making a special announcement about the future of this show. We’re going to be expanding the scope of our storytelling as well as the types of material available on our website. The mouse brain detective (28 May 2013) Neuroscientist Nick Weiler discusses powerful new techniques used to map the brain at the molecular scale and how the manipulation of mouse whiskers can teach us how the brain changes as we learn.

Physical Review X Does Research on Foundations of Quantum Mechanics Fit into PRX’s Scope? October 24, 2014 The editors and Bill Poirier from Texas Tech University spotlight an original, thought-provoking paper by Hall, Deckert, and Wiseman on foundations of quantum mechanics, Phys. Rev. Kilo: Long-Lasting Typhoon May Strenghten Meteorologist Ari Sarsalari talks about Typhoon Kilo, a long-lasting storm churning in the West Pacific. The hyperactive Pacific Ocean pulled off an impressive feat with six tropical cyclones spinning in the Pacific Basin at one time Sunday, July 12. Tropical Depression Six-E developed in the eastern Pacific Sunday morning becoming the sixth tropical cyclone in the Pacific Ocean to be active at one time – joining Tropical Storm Dolores in its own basin; Typhoon Nangka and then-Tropical Storm Chan-hom, in the Western Pacific; and Halola and Iune, which were then both Central Pacific tropical storms. Six at Once - July 12, 2015

Jeremy Corbyn appoints Labour’s first shadow minister for climate justice Jeremy Corbyn has created a new role on Labour’s front bench, appointing a shadow minister for climate justice to liaise with young popular movements such as Extinction Rebellion. The move comes after the UK parliament became the first in the world to declare an “environment and climate emergency” – a symbolic motion recognising the need to combat the climate crisis. Earlier this year, Mr Corbyn and government ministers also met with the 16-year-old climate activist Greta Thunberg and at the time he pledged to continue “conversations with youth climate strikers”. We’ll tell you what’s true. You can form your own view. From 15p €0.18 $0.18 USD 0.27 a day, more exclusives, analysis and extras.

Ecosystem services Humankind benefits in a multitude of ways from ecosystems. Collectively, these benefits are known as ecosystem services. Ecosystem services are regularly involved in the provisioning of clean drinking water and the decomposition of wastes. What is this thing called science? As a scientist, Evelyn Fox Keller hated experiments. Today a professor emerita in the History of Science at MIT, she started out her scientific career in theoretical physics before jumping to molecular biology. What got her was the trivial volatility inherent in experimentation. “Someone could brush by the thermostat on the water bath, and a months’ work would be down the drain. You didn’t have control over it.” The methods of theoretical physics better suited her.

Climate Impacts on Human Health Climate Impacts on Human Health Climate Impacts on Alaska Key Points A warmer climate is expected to both increase the risk of heat-related illnesses and death and worsen conditions for air quality. Revealed: 'fierce' Pacific forum meeting almost collapsed over climate crisis Critical talks at the Pacific Islands Forum almost collapsed twice amid “fierce” clashes between the Australian prime minister, Scott Morrison, and Tuvalu’s prime minister, Enele Sopoaga, over Australia’s “red lines” on climate change. Ralph Regenvanu, Vanuatu’s foreign minister, who was part of the drafting committee of the forum communique and observed the leaders’ retreat, said there was heated discussion over the Australian delegation’s insistence on the removal of references to coal, setting a target of limiting global warming to below 1.5C and announcing a strategy for zero emissions by 2050. He described the discussions as “frank, fierce at times, [with] very strong positions being held”. “Negotiations almost broke down twice, [with leaders] saying ‘this is not going to happen, we’re not going to have a collective decision’,” he said.