How to make an external laptop graphics adaptor 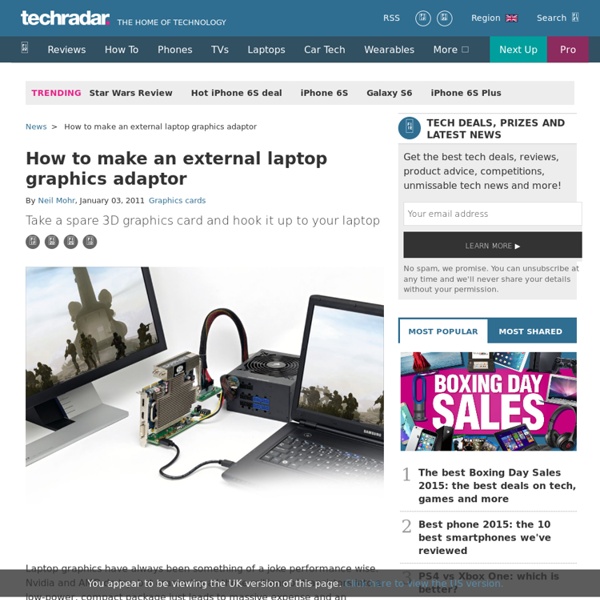 Laptop graphics have always been something of a joke performance wise. Nvidia and AMD do try, but cramming all those millions of transistors into a low-power, compact package just leads to massive expense and an inability to upgrade. Wouldn't it be perfect if you could simply use a standard external graphics card to power your laptop's 3D graphics? Article continues below The good news is that you can. The suitably technical-sounding PE4H is just that; a passive PCI-e x16 to x1 adaptor, which enables you to plug an external graphics card into a laptop's ExpressCard slot. We'd like to say it's as simple as that, but this project does have a few sticking points. The second is Windows 7, as it handles multiple display drivers far more adeptly than anything else. Also if your laptop has more than 2GB of memory a 64-bit installation is also required, as otherwise you'll hit the 4GB address space limit hard. The walkthrough below details putting together a system. Troubleshooting 1. 2. 3. 4. 5.

The 50 Best Registry Hacks that Make Windows Better We’re big fans of hacking the Windows Registry around here, and we’ve got one of the biggest collections of registry hacks you’ll find. Don’t believe us? Here’s a list of the top 50 registry hacks that we’ve covered. It’s important to note that you should never hack the registry if you don’t know what you’re doing, because your computer will light on fire and some squirrels may be injured. 10 Xbox 360 tricks Microsoft won't tell you 1. Connect your Xbox 360 to two screens at once If you've got one of the component/composite dual video cables – the one that comes in the box with most 360s – you can have your console display its gamey goodness on two TVs simultaneously. The trick is to flick the cable's switch to Standard Definition but hook up the composite (yellow) cable to one screen and the component (the red, green, blue) cables to another. It won't be high-def, but it could be handy if you're staging a mini LAN party and want to set up a display for bored spectators to point their eyes at. 2.

How do I turn off the prompt to launch in safe mode? I noticed that since Firefox 18 on Windows 8 I have observed the safe mode window here: pop up when Firefox crashes asking me to launch in Safe Mode. This window is useful, but I would like to turn it off. The circumstances under which I'm using Firefox require that it just loads into the browser window immediately (I'm doing automated browser testing.

Top 5 Most Creative Uses for LCDs 5. DIY Wireless LCD Max shows us how to build your own wireless LCD screen in just “5 minutes” using ACODE-300 Bluetooth modules. The 32 Totally Essential (and Free) Apps for Every New PC You have to admit, Windows is a pretty barebones operating system, feature-wise. After a fresh install of XP or Vista (perhaps following a Clean Start), you're faced with a barren Start Menu and an empty desktop that's beaming with limitless potential. The problem is that it's up to you to hunt and download those applications that you really need in your day-to-day computing experience. And chances are, it's often difficult to find good software that's also free.

Open Source Software Deployment and Distribution From WPKG | Open Source Software Deployment and Distribution This is not a complete installer package, it's a collection of methods you can use to perform operations depending on the windows version you are using The following examples show you how to determine which version of Windows you are running.