Rf Gateways. Four Awesome Finishing Touches to Make Realistic Movie Models. Extruders 101: A crash course on an essential component of your 3D printer. Direct Extruder Weaknesses Because direct extruders are directly attached to the hot end, its mass must be moved along with the hot end. 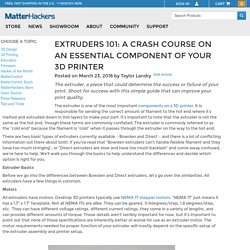 Moving more mass around means more likelihood for backlash, overshoot, and frame wobble (there are other things, but these are the most important for the purposes of this article). We won’t get into technical details about the specific mechanics involved, but, to quickly illustrate, imagine driving a car. It’s much easier to stop if your car weighs 2000lbs than if it weighs 4000lbs, right? It’s also easier to accelerate and change direction, and it gets better gas mileage. The same goes for your printer. Said differently, with all other things being equal, you are able to print faster, more accurately, and more precisely with a bowden extruder than with a direct extruder because you can accelerate and decelerate faster, as well as change directions more accurately and precisely due to less mass on the hot end carriage. 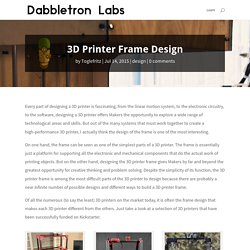 First, this type of construction is very inexpensive. The material most commonly used for computer-cut 3D printer frames is MDF or plywood, both of which are very cheap. Second, designing laser cut panels is extremely easy and does not require specialized software as the design work is basically done in two dimensions. Third, building frames from computer-cut panels offers easy construction while also offering a fairly good-looking (but still mostly appealing to hobbyists) finished product. Fourth, 3D printers built with this technique are, in general, safer than those built with member and joint construction because the moving parts and the hot parts of the 3D printers are typically covered by the computer-cut panels.

But, building 3D printer frames from laser-cut CNC-cut panels has its drawbacks as well. Metal Framing and Injection Molding. RepRap Calculator - Prusa Printers. Sketchup+c+beam. Enable Auto Leveling for your 3D Printer with an inductive sensor (Marlin Firmware) The auto-leveling sensor will be replacing your 3D printers z-end stop on your control board. 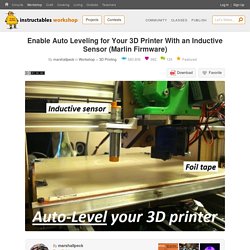 You won't need the old z-stop because your sensor will be probing the bed for it's z-position. Make sure your sensor has a detecting distance of at least 4mm. In reality, this might be lower depending on the sensing material. Your sensor should be mounted close to the nozzle and able to reach near the corners of your print bed when mounted. There's a quick video by Tom's guide that includes set-up and modifying your sensor if you have the LJ12A3-4-Z/BX (blue tip) or find out yours requires voltage modification.

The sensor mentioned in this indestructible has an LED that turns on when triggered. For the mount, 123D design is perfect designing simple objects like this and of course, thingiverse.com. Wiring the LJ12A3-4-Z/BY Inductive Proximity Sensor: 1) Locate and disconnect the z-probe from your control board. 5) Test the sensor on some metal, aluminum, copper, etc. Next step: Firmware Setup --> Reprap development and further adventures in DIY 3D printing. UNI-PRINT-3D. 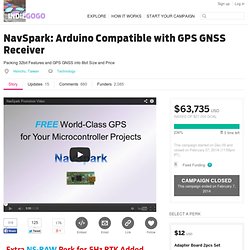 NavSpark 点名时间上中文說明: NavSpark is a small, powerful, breadboard-friendly, 32bit development board that is Arduino compatible, with a world class GPS receiver as on-board peripheral, and under $15. There is also NavSpark-BD, a variant model having world-class GPS/Beidou receiver as on-board peripheral, that enables you to adopt new GPS/Beidou satellite navigation technology when Broadcom Qualcomm just recently came out with solution supporting Beidou to their tier-1 smartphone customers like Apple and Samsung.

NavSpark puts leading edge satellite navigation technology in the hands of the makers. Up until now, adding GPS to an Arduino requires additional GPS shield, which adds cost and size. We have been developing GPS related products for some years. . · GPS on board · Breadboard compatible 1. 2. 3. 4.