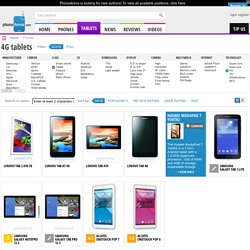 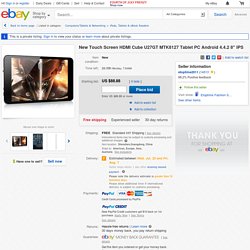 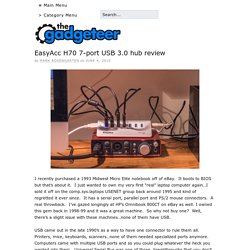 It boots to BIOS but that’s about it. I just wanted to own my very first “real” laptop computer again…I sold it off on the comp.sys.laptops USENET group back around 1995 and kind of regretted it ever since. It has a serial port, parallel port and PS/2 mouse connectors. A real throwback. I’ve gazed longingly at HP’s Omnibook 800CT on eBay as well. USB came out in the late 1990’s as a way to have one connector to rule them all. And boy, do we have lots of things to connect to our computers. I recently moved everything over to a Retina iMac and I am one seriously happy camper, though one sticking point remains…more USB stuff than the four USB ports on the back of the machine can handle.

This thing is Mac aesthetic all the way, its polished aluminum is not only durable but matches the design of the Apple Wireless Keyboard and Trackpad. Netgear speeds up its networked storage solution for home users. July 11, 2007 As laptop and PC ownership rises, households are more and more frequently running wired and wireless networks between several PCs, laptops, printers, and other devices. 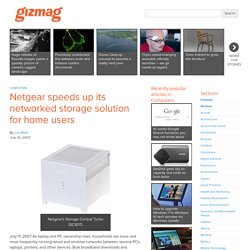 Bulk broadband downloads and growing amounts of home media production all take up a lot of hard drive space, and external storage devices can be quite fiddly - which is why Network-Attached Storage (NAS) devices are growing in popularity. Netgear's latest NAS device aimed at the home market is the SC101T Storage Central Turbo. It's quicker than its predecessor - operating at fast Gigabit Ethernet transfer speeds - and houses up to two fast 3.5" SATA hard drives of any capacity to provide a networked storage solution for home and small business networks. Netgear recently announced the worldwide availability of its Storage Central Turbo (SC101T) NAS device. This next generation of the SC101 series simultaneously shares and protects digital assets such as music, photos, videos, HD movies, and data files. SanDisk goes big on capacity and small on form factor. SanDisk, whose flash memory offerings are usually in the form of memory cards and SSDs for laptops, desktops and enterprise applications, has now expanded into the portable SSD market. 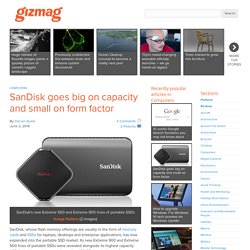 Its new Extreme 900 and Extreme 500 lines of portable SSDs were revealed alongside its highest capacity USB flash drive and the world's smallest 128 GB thumb drive at Computex in Taiwan. With no moving parts, solid-state flash memory has obvious advantages for portable hard drives that are likely to be subjected to their fair share of rough and tumble, so it's no big surprise to see that SanDisk has put the technology into its line of Extreme 500 rugged drives.