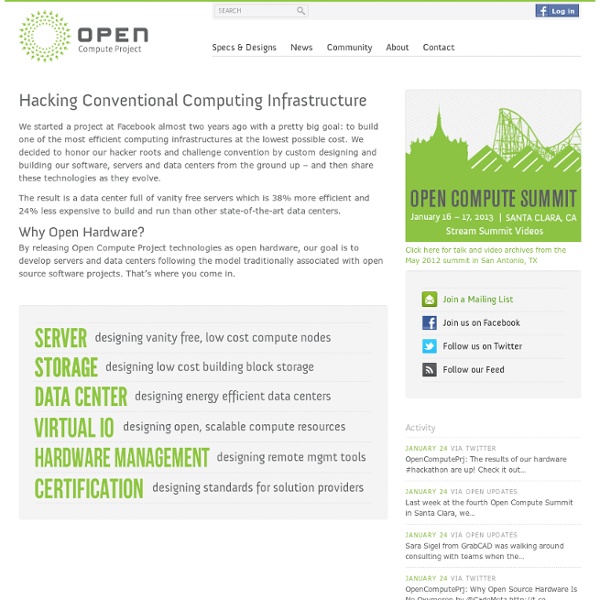 Download - Facebook Unveils Custom Servers, Facility Design A look at the blue-lit servers inside the cold aisle of the new Facebook data center in Prineville, Oregon. Facebook today unveiled details of its new technology infrastructure, which features custom-built servers, racks and UPS units that will fill its new data center in Prineville, Oregon. The project is Facebook’s first company-built facility, and is optimized from the two-story structure right down to the servers to reflect the company’s vision for energy efficient data center operations. “Being able to design more efficient servers, both in terms of cost and power usage, is a big part of enabling us to build the features we add,” said Mark Zuckerberg, the CEO of Facebook, in a briefing in Palo Alto, California. Facebook’s servers are powered by chips from both Intel and AMD, with custom-designed motherboards and chassis built by Quanta Computer of Taiwan. The servers use a 1.5U form factor, allowing the use of larger heat sinks and fans to improve cooling efficiency. Racks and Servers

Flash Memory Joint Venture SANTA CLARA, Calif. and BOISE, Idaho, Feb. 28, 2012 (GLOBE NEWSWIRE) -- Intel Corporation (Nasdaq:INTC) and Micron Technology, Inc. (Nasdaq:MU), today announced that the companies have entered into agreements to expand their NAND Flash memory joint venture relationship. The agreements, which are designed to improve the flexibility and efficiency of the joint venture, include a NAND Flash supply agreement for Micron to supply NAND products to Intel and agreements for certain joint venture assets to be sold to Micron. Under terms of the agreement, Intel is selling its stake in two wafer factories in exchange for approximately $600 million—the approximate book value of Intel's share. Additionally, Intel will be receiving approximately half of the consideration in cash and the remaining amount will be deposited with Micron, which may be refunded or applied to Intel's future purchases under the NAND Flash supply agreement. Intel (Nasdaq:INTC) is a world leader in computing innovation.

Home - The Good Entrepreneur Download - How does easyDNS Compare Against other DNS Providers The way we see it, it's . So we spend it on things that will give you more bang for buck. and will always win our cost/benefit analysis over superbowl ads, junkets or ego-gratifying pep-rallies. Customer Profile #1: You already know all about DNS and you know who we are. If that's the case then it's pointless for us to show up at a conference with an off-duty stripper dolled up in an easy DNS bikini trying to explain how anycast DNS works. You probably know already, the stripper doesn't. Customer Profile #2: All you know is that you need a domain name and somebody you trust told you "just go to easyDNS" Yeah, we get a lot of that around here. In either case you probably clicked on the "About" link in the menu to try and glean exactly just what kind of company we are. We've been in business since 1998. We have no outside investors, no VC funding and no exit plan. If you call us during business hours, you will likely have a real live human pick up the phone after a ring or two.

Micron Technology, Inc. DRAM, NAND Flash, NOR Flash, MCP, Hybrid Memory Cube, SSD, FLCOS Microdisplays Startup Mantra: Hire Fast, Fire Fast Editor’s Note: This is a guest post by Mark Suster (@msuster), a 2x entrepreneur, now VC at GRP Partners. Read more about Suster at his Startup Blog, BothSidesoftheTable. I have often said that what separates real entrepreneurs from pundits and bystanders is a bias towards getting things done versus over analyzing things. It’s the hardest thing to teach people who come out of big companies, out of conservative jobs. And so things operate on a CYA basis. That doesn’t work in a startup. There’s a certain cadence that you can feel when you spend time hanging any well-run startup company. The startup entrepreneur knows that they’re going to be wrong often. In my mind the sign of a great entrepreneur is the one that spots the 30% scenario quickly and adjusts but doesn’t get gun shy about rapid decision-making in the future. In fact, analysis paralysis drives me fucking bonkers. Many people find this uncomfortable. So that was a long walk into the topic of recruiting. Hire Slowly? Fire Fast?

Download - SPARQL Query Language for RDF W3C Recommendation 15 January 2008 New Version Available: SPARQL 1.1 (Document Status Update, 26 March 2013) The SPARQL Working Group has produced a W3C Recommendation for a new version of SPARQL which adds features to this 2008 version. Please see SPARQL 1.1 Overview for an introduction to SPARQL 1.1 and a guide to the SPARQL 1.1 document set. This version: Latest version: Previous version: Editors: Eric Prud'hommeaux, W3C <eric@w3.org> Andy Seaborne, Hewlett-Packard Laboratories, Bristol <andy.seaborne@hp.com> Please refer to the errata for this document, which may include some normative corrections. See also translations. Copyright © 2006-2007 W3C® (MIT, ERCIM, Keio), All Rights Reserved. Abstract RDF is a directed, labeled graph data format for representing information in the Web. Status of This Document This is a W3C Recommendation. Appendices ? ? ? ?