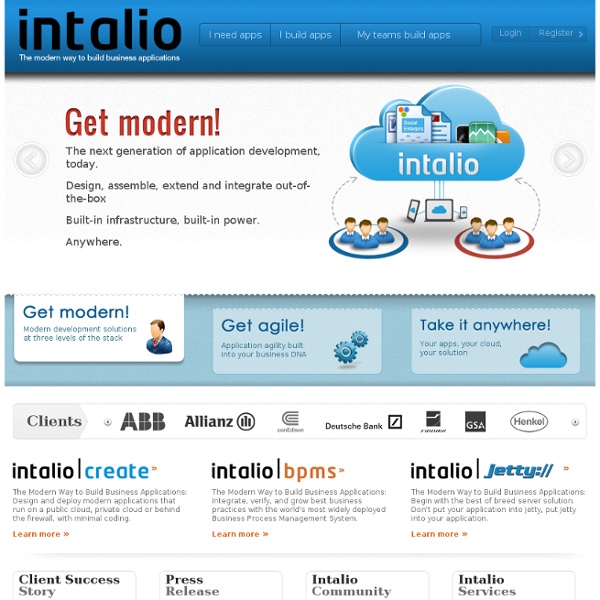 List of top open source BPM / workflow solution by Software for Enterprise Every organization has their very own distinct business processes which differentiates them from their competitors. Some companies have predefined processes while some have processes which are defined by the employees themselves. Imagine what would happen if each customer support representative have their own way of managing a customer. Without a proper process in place, calls from customers can go unanswered and can be transferred endlessly. Lately, with the help of advance web based solutions, business processes and workflows can be managed through business process management (BPM) solutions.

Drools - JBoss Drools - The Business Logic integration Platform Drools 5 introduces the Business Logic integration Platform which provides a unified and integrated platform for Rules, Workflow and Event Processing. It's been designed from the ground up so that each aspect is a first class citizen, with no compromises. Upcoming events 50 Striking Vintage and Retro Logo Designs Old really is the new new, and we are about to show you exactly why! These days there are so many web 2.0 logo designs. If you don’t know what that is, then let us explain. These logos probably include on of the following elements: shiny, gradients, drop shadows, rounded corners, futuristic looks, and much more.

Developers Guide - Activiti Dependencies JDK 6+ : Make sure that you do not use code constructs that require JDK 7 or higher. Maven 3.0.4 Ant 1.8.1 Source Code Building the distribution Concept map - Wikipedia, the free encyclopedia - Iceweasel An Electricity Concept Map, an example of a concept map A concept map or conceptual diagram is a diagram that depicts suggested relationships between concepts.[1] It is a graphical tool that designers, engineers, technical writers, and others use to organize and structure knowledge. A concept map typically represents ideas and information as boxes or circles, which it connects with labeled arrows in a downward-branching hierarchical structure. The relationship between concepts can be articulated in linking phrases such as causes, requires, or contributes to.[2] Overview[edit] A concept map is a way of representing relationships between ideas, images, or words in the same way that a sentence diagram represents the grammar of a sentence, a road map represents the locations of highways and towns, and a circuit diagram represents the workings of an electrical appliance.

City of Symbols Dan Brown’s latest novel sends symbologist Robert Langdon on a new quest. Having previously tangled with the Priory of Sion and the Illuminati, this time he’s pursuing the Freemasons; and once again he must follow a treasure trail of clues hidden in the urban landscape. Dan Brown is notorious for his loose approach to historical fact, and accuracy takes second place to keeping the plot moving. His location is Washington, DC, a city with plenty of Masonic connections. But Brown might have done better to start at the roots of Freemasonry in the City of London.

strobit - Strobit Wireless Widget Open Hardware Project Welcome to the Strobit Wireless Widget Project. The project aims to is to create a compact, low cost, battery powered, wireless enabled Arduino that is Open (as in Open Hardware). All Documentation is available via the wiki. See RoadMap documentation for further details. Images Activiti - Safari tutorial A couple weeks ago I implemented 2 web applications and a REST API for a new open sourced BPM / BPMN 2.0 engine named Activiti. Feel free to visit where you may download the distribution (Apache licensed) and play around with it. The actual BPM engine is just a simple jar file having the benefit of therefore being deployable in virtually any JAVA environment. The whole architecture for the REST API and web applications was built using the Spring Surf framework.

Is collaboration tech bad for office autocrats too? — Online Collaboration Last week across the tech world, a wave of colleagues returned from SXSW, inducing some jealousy in those of us who couldn’t make the event. But besides bringing a bit of envy to the office or social media chatter, returnees from Austin also brought back intriguing ideas to spur conversations back in their daily lives. Lilly Hanscom, communications manager at collaboration platform Podio, for instance, got in touch with an audio recording of a thought-provoking SXSW panel discussion called ‘Decentralized Organizations: Do They Work?‘ She thought it was a cool unpacking of the underlying philosophy that animates her company, but it also fits right in with the preoccupations of WebWorkerDaily. It’s now possible for the first time in human history to have the economic benefits of very large organizations, things like economies of scale, and at the same time to have the human benefits of very small organizations, things like freedom, flexibility, motivation and creativity.