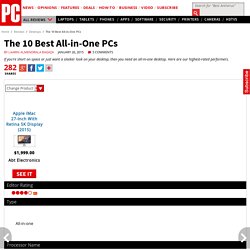 It has gone from being the only game in town (think Commodore Pet/Apple III/TRS-80) to a tiny niche (the original Apple iMac) in a sea of tower PCs, to today, where the all-in-one desktop is replacing the tower PC as the form factor you picture in your head when you hear the phrase "desktop computer. " The Apple iMac's surge in popularity during the late 1990s and 2000s caused all the other PC manufacturers to reevaluate their desktop strategy. The death of the CRT monitor hastened the adoption rate, since LCD screens can be made so much thinner than CRTs (and consequently the computer itself becomes slimmer). 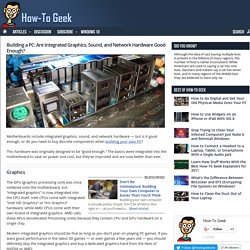 Modern integrated graphics should be fine as long as you don’t plan on playing PC games. How to Buy a Business Desktop. Business desktops may not be the hottest players in the PC market, but in terms of the actual number of units the big manufacturers ship each year, they represent a significant segment. 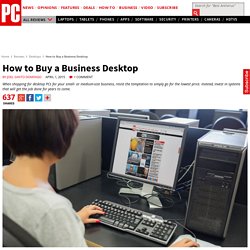 Think about it: You can still write a novel on a typewriter, shoot photographs with film, or play music live and record it with a DAT deck, but very few businesses can get their work done without a PC. Even a mom-and-pop outfit that caters to a non-technological audience needs a PC to communicate with suppliers, customers, and potential customers. Email, Twitter, the Web: All of these technologies make today's business happen. While it may be tempting to buy a simple consumer PC from a big-box store like Best Buy or Wal-Mart, you'll probably be doing yourself and your customers a disservice if you do.

Specialized business PCs have extra features that make them better suited to the office than the $250 sales-circular special. The Heart of the Matter: How Much Power? Where Do Mini PCs Fit In? The Best Processors for Desktops. OB Roundup One of the biggest benefits of desktop computers is that nearly all of their components are within your control. 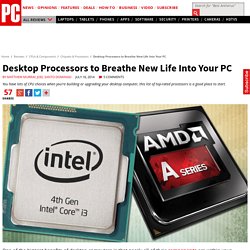 You probably know that if you're building a PC from scratch, you can choose the hardware that fits within your price range and usage patterns, but your freedom doesn't stop there. Being able to upgrade your system by swapping out older or slower parts for newer and speedier ones is a huge thrill, and can have an enormous impact on every aspect of your computing life. And with no piece of hardware is the difference likely to be more profound than with your processor. With a minimal time investment, changing your processor (aka Central Processing Unit or CPU) can give you the light, limber feel of a new computer—and you don't have to sacrifice everything else you're already familiar with in order to get it.

Don't give up so easily—a better computing experience can be just minutes away.