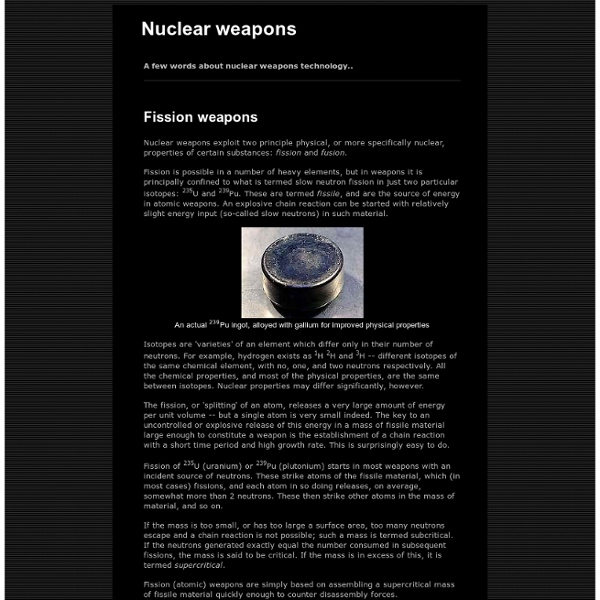 A few words about nuclear weapons technology.. Fission weapons Nuclear weapons exploit two principle physical, or more specifically nuclear, properties of certain substances: fission and fusion. Fission is possible in a number of heavy elements, but in weapons it is principally confined to what is termed slow neutron fission in just two particular isotopes: 235U and 239Pu. These are termed fissile, and are the source of energy in atomic weapons. Typical appearance of a thermonuclear weapon detonation -- from many miles away. *Special techniques were required to record the fleeting moments of a weapon's initial detonation. Related:  Hardware

Demon core Manufacturing and early history[edit] The two physicists Harry Daghlian (center left) and Louis Slotin (center right) during the Trinity Test The next bomb of the implosion type had been scheduled to be ready for delivery on the target on the first good weather after August 24th, 1945. We have gained 4 days in manufacture and expect to ship the final components from New Mexico on August 12th or 13th. Marshall added an annotation, "It is not to be released on Japan without express authority from the President", as President Harry S. First incident[edit] On August 21, 1945, the plutonium core produced a burst of neutron radiation that led to physicist Harry Daghlian's death. Second incident[edit] A re-creation of the 1946 experiment. There have been five studies done of the amount of radiation each person involved received in the accident; these are the latest, dated 1978, from a table in this reference: Operation Crossroads[edit] References[edit] Jump up ^ Wellerstein, Alex.

Is the Universe a Holographic Reality? - Global One TV The Universe as a Hologram by Michael Talbot Does Objective Reality Exist, or is the Universe a Phantasm? In 1982 a remarkable event took place. At the University of Paris a research team led by physicist Alain Aspect performed what may turn out to be one of the most important experiments of the 20th century. You did not hear about it on the evening news. In fact, unless you are in the habit of reading scientific journals you probably have never even heard Aspect's name, though there are some who believe his discovery may change the face of science. Aspect and his team discovered that under certain circumstances subatomic particles such as electrons are able to instantaneously communicate with each other regardless of the distance separating them. University of London physicist David Bohm, for example, believes Aspect's findings imply that objective reality does not exist, that despite its apparent solidity the universe is at heart a phantasm, a gigantic and splendidly detailed hologram.

Science, Pseudoscience, and Irrationalism Steven Dutch, Natural and Applied Sciences, University of Wisconsin - Green Bay First-time Visitors: Please visit Site Map and Disclaimer. Use "Back" to return here. What's Here and Not Here, And Why Things on this site generally fit one of the following criteria: They're within my area of technical expertise (earth science, physical sciences, astronomy) They pertain to the general nature of science They pertain to other areas where I have personal experience (military issues) They pertain to topics where blatantly fallacious logic is involved Although there is plenty of pseudoscience related to medical fads, diets, and the paranormal, I don't deal with them much because they are outside my formal training. There are certain things I don't put here because this is a site hosted by a public institution Partisan political positions. "Respect" Every so often I get e-mails from people complaining I don't treat these topics or their believers with respect. They're right. Respect? Anti-Evolutionism

The Dark Side of Success: Google in the Courtroom The more successful you become, the bigger your legal team needs to be. Or so it seems. Competitors, ex-employees and nut jobs all want a piece of the action. And if it’s not them, it’s the government trying to to curb your reach. Then again, with a battalion of top-tier lawyers at your disposal ready to bury plaintiffs in paperwork and motions, who would dare to take you on? This is part of a special infographic series by Search Engine Journal. Jenise is CEO of Alpha Brand Media, publisher of Search Engine Journal. Wireless, handheld device for ground control of X-47B unmanned aircraft tested The first shore-based trials of the Control Display Unit (CDU) that wirelessly controls the X-47B on the ground (Photo: Northrop Grumman) Image Gallery (2 images) While impressive, unmanned flight is just one of the capabilities required of the Northrop Grumman-built X-47B Unmanned Combat Air System (UCAS) if it is to enter service with the U.S. Navy. Prior to and after any flights, the aircraft also needs to be safely maneuvered around the crowded deck of an aircraft carrier. Northrop Grumman and the U.S. In its first shore-based trials carried out earlier this month at Naval Air Station Patuxent River, Maryland, the handheld device, called a Control Display Unit (CDU), was used to control the X-47B’s engine thrust to roll the aircraft forward, brake and stop, and use its nose wheel steering to execute the tight, precision turns required to maneuver the aircraft into a catapult or out of the landing area following a landing. Source: Northrop Grumman About the Author

Breathingearth - CO2, birth & death rates by country, simulated real-time How to Make a Survival Shotgun Editor’s note: This is a guest post from Creek Stewart of Willow Haven Outdoor. As a Survival and Preparedness instructor, I take my line of work very seriously–sometimes too seriously. Occasionally, though, I like to take on survival projects that are just downright fun. This article highlights one of those projects. I’m fortunate in that I’ve been able to turn my passion into my profession–this being the study of Survival and Preparedness. Ultimately your survival needs fall into five main categories. WaterFireShelterSignalingFood Every survival kit must include contents that directly or indirectly meet these five basic survival needs. Mossberg 500 Pump Action Shotgun Before Survival/Zombie Modifications I will now break down each survival modification and detail why it was included in the final build. Ammunition First things first: the gun itself. Your Arsenal: Bird Shot, Buck Shot, and Slugs In addition to hunting, a shotgun is an excellent self-defense weapon. Side Saddle on the Stock Saw

Physics Lectures One-Minute Physics archive Sandrine Ceurstemont, editor, New Scientist TV What's part of the universe? You may think of it as incorporating everything that exists - both on Earth and in space - but could it also include the unknown? In this One-Minute Physics episode, film-maker Henry Reich delves into the notion of the universe as described by physics, distinguishing between the whole universe and what's observable. If you enjoyed this post, check out our previous animations, to find out, for example, if space is infinite or why mass has a split personality. Ever been mesmerised by patterns of light at the bottom of a swimming pool? Time travel in the real world isn't yet possible. Developed by Wolfgang Schleich and colleagues at the University of Ulm in Germany, these first time-travel videos mathematically recreate the weird world of Gödel's universe. MacGregor Campbell, contributor We interact with the concept of mass every day. MacGregor Campbell, consultant Does objective reality exist? Jacob Aron, reporter

Handcuffs Of The Future Administer Shocks And Drugs To The Detained A patent for next-generation handcuffs offers a future in which the detained can be zapped directly from their restraints, and even injected with a medication, sedative, irritant, paralytic, or other fine substance. The patent is called “Apparatus and System For Augmented Detainee Restraint” and is the brainchild of Scottsdale Inventions.The augmentations it offers are truly quite something. The handcuffs are “configured to administer electrical shocks when certain predetermined conditions occur.”

Singularity Theory May Explain Fermi Paradox The Drake equation demonstrates that due to the vast scope of our universe, it is highly unlikely that there is not intelligent life other than us. The Fermi paradox ponders why (considering the results from the Drake equation) we have not yet detected any other intelligent life. Singularity theory anticipates a point in time where rapid growth in intelligence and replication create a border that is like an asymptote or singularity threshold beyond which lies an undefinable area that is not comparable to what we currently know as intelligence. The Schwarzchild radius describes the limit of the ability of light to escape a black hole singularity, or the “edge” of the black hole where it becomes totally black. The answer to the Fermi paradox may lie in the idea of a singularity-like expansion in intelligence that rapidly moves beyond our ability to understand it or detect it. By Omar Fink on September 22nd, 2010 Stumble It!