Nexus 7 sells out across the USA. It's an amazing feat to behold when a company makes a device so popular that it sells out in one store, much less the entirety of the USA - but that's what Google is doing with the Nexus 7. This ASUS-manufactured tablet appears very much to be capturing the imaginations - and pocketbooks - of users across the United States as well as the UK as retailers both offline and online are showing sold out signs galore. 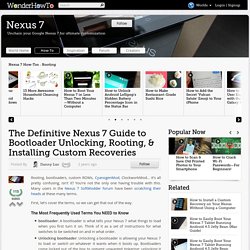 You're not the only one having trouble with this. Many users in the Nexus 7 SoftModder forum have been scratching their heads at these many terms. First, let's cover the terms, so we can get that out of the way. The Most Frequently Used Terms You NEED to Know. Installing Omni on your device - Omni. Index of /Nexus7/4.4/zips. AOKP.co: Learn. AOKP.co: grouper. AOKP.co: About. About. TWRP is an open source, community project. 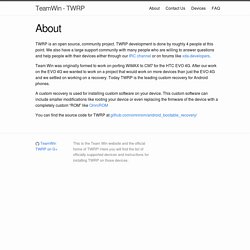 TWRP development is done by roughly 4 people at this point. We also have a large support community with many people who are willing to answer questions and help people with their devices either through our IRC channel or on forums like xda-developers. Team Win was originally formed to work on porting WiMAX to CM7 for the HTC EVO 4G. After our work on the EVO 4G we wanted to work on a project that would work on more devices than just the EVO 4G and we settled on working on a recovery. Today TWRP is the leading custom recovery for Android phones. A custom recovery is used for installing custom software on your device. 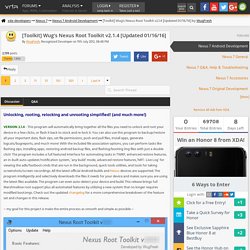 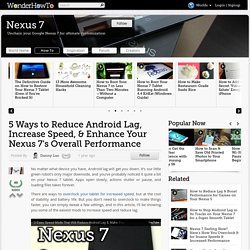 It's our little green robot's only major downside, and you've probably noticed it quite a bit on your Nexus 7 tablet. Apps open slowly, actions stutter or pause, and loading files takes forever. There are ways to overclock your tablet for increased speed, but at the cost of stability and battery life. But you don't need to overclock to make things faster, you can simply tweak a few settings, and in this article, I'll be showing you some of the easiest mods to increase speed and reduce lag.

NOTE: The above video covers the first three methods. Method 1: Reseed the Entropy Pool (Root Required) First, let's decrease the amount of time apps take to launch, make the Home screen scroll faster, and make Android more responsive in general. Currently, the newest version is 2.0.0, which you can download directly from here. Image via wonderhowto.com. ROM Manager. Device Control does NOT root your device! 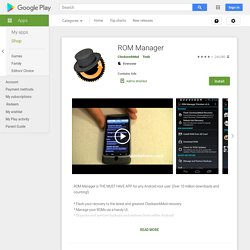 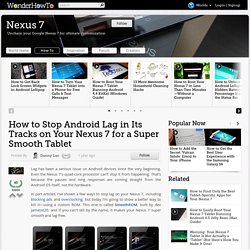 Even the Nexus 7's quad-core processor can't stop it from happening. That's because the pauses and long responses are coming straight from the Android OS itself, not the hardware. In part articles, I've shown a few ways to stop lag on your Nexus 7, including blocking ads and overclocking, but today I'm going to show a better way to kill it—using a custom ROM. This one is called SmoothROM, built by dev Jamesst20, and if you can't tell by the name, it makes your Nexus 7 super smooth and lag-free. Image via imgur.com Smooth ROM is highly customizable on your Nexus 7 tablet. Pick and choose your custom kernel Tablet UI or stock Your choice of browsers Install Google apps Install SmoothROM SmoothROM is one of the easiest ROMs to install, so don't worry. Here are my recommendations for the install options: Kernel: I recommend Franco Kernel.