Building a Merlin or Orion Motorized Pano-head. I have been interested in making a motorized head for my panoramic photography since I first read about Cirkut cameras. 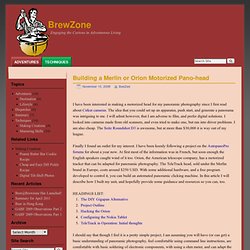 The idea that you could set up an apparatus, push start, and generate a panorama was intriguing to me. I will admit however, that I am adverse to film, and prefer digital solutions. I looked into cameras made from old scanners, and even tried to make one, but ran into driver problems. I am also cheap. Krpano.com. Kaidan Incorporated. Seitz Roundshot Home. Build an HDR robot. The design and construction of a robotized Panoramic Head, for use with Image-Based Lighting (IBL). 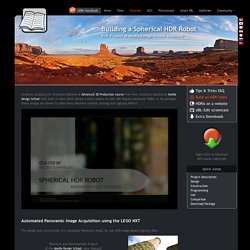 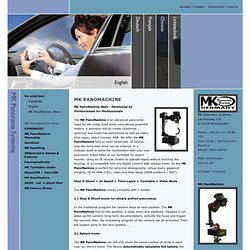 We offer the MK PanoMachine fully or semi motorized. Of course, only the horizontal drive can be ordered. It´s modular build to allow the combination with your own panoramic tripod head or our turntable for object movies. Using an IR remote control to operate easily without touching the housing. It´s compatible with any digital camera with release cable. Stop & Shoot + 2x Speed + Time-Lapse + Turntable + Video Mode Our MK PanoMachine comes complete with 7 modes: 1.)

In the traditional program the camera stops at each position. Taking Handheld Panoramic Images. By keeping in mind a few simple techniques, you can capture scenes for later stitching into striking panoramas. 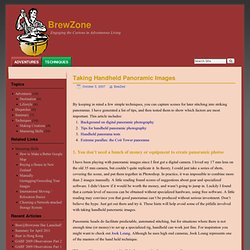 I have generated a list of tips, and then tested them to show which factors are most important. This article includes: 1. You don’t need a bunch of money or equipment to create panoramic photos. Introduction: The objectives. Many tutorials tell how to locate the nodal point of a fisheye lens, often for the Nikon Coolpix 950, 990 or 995. 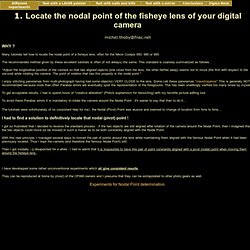 The recommanded method given by these excellent tutorials is often (if not always) the same. This standard is coarsely summarized as follows : "Adjust the longitudinal position of the camera so that two aligned objects (one close from the lens, the other farther away) seems not to move (the first with respect to the second) while rotating the camera. The point of rotation that has this property is the nodal point.

" I enjoy stitching panoramas from multi-photograph having had some object(s) VERY CLOSE to the lens. To get acceptable results, I had to spend hours of "creative alteration" (Philo's euphemism for retouching) with my favorite picture editing tool. English. FieldOfView/CuTy - GitHub. Lights on Pictura. Teekengenootschap Pictura was established in 1774 by a number of prominent artists from Dordrecht. 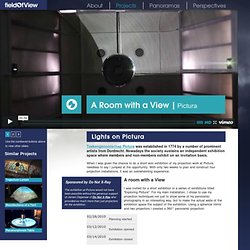 Nowadays the society sustains an independent exhibition space where members and non-members exhibit on an invitation basis. When I was given the chance to do a short solo exhibition of my projection work at Pictura, needless to say I jumped at the opportunity. With only two weeks to plan and construct four projection installations, it was an overwhelming experience. Sponsored by Do Not X-Ray. FieldOfView. CuTy is a tiny (10 kb), dedicated viewer for (single node, JPEG encoded, cubic) QTVR .mov files based for Flash Player 10 and newer. 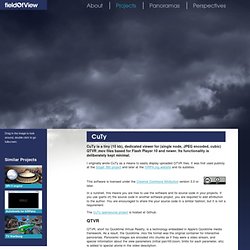 Its functionality is deliberately kept minimal. I originally wrote CuTy as a means to easily display uploaded QTVR files. It was first used publicly at the Sziget 360 project and later at the IVRPA.org website and its subsites. This software is licensed under the Creative Commons Attribution version 3.0 or later. In a nutshell, this means you are free to use the software and its source code in your projects. Pete's Cheapo Nodal Samurai Homemade Panoramic (Pano) Head 'L' Bracket.

Lightweight Panohead Solutions. Homemade Panoramic Head. Seamless panoramic pictures, whether the immersive 360° virtual reality type or otherwise, require a way of rotating the camera about the point of zero parallax within the lens, often called its nodal point (or entrance pupil, whatever etc.). 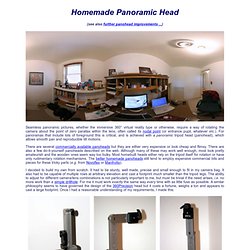 For panoramas that include lots of foreground this is critical, and is achieved with a panoramic tripod head (panohead), which allows smooth pan and reproducible tilt motions. DIY Robotic Panorama Head. The most well-known robotic panorama head is the GigaPan. At the time I started building my own, they were selling for under $300. For what they do, that was (is) very cheap. But I didn't like the fact that I couldn't modify the Gigapan or control it from my PC. I also didn't want a panohead that had weight limitations. So I set out to build a robotic panorama head that could be controlled by a PC (for maximum flexibility) and could hold any size camera.

Agno's. Girocam Kolor. Heads. Off the shelf There is a number of commercial panoramic tripod heads on the market, at widely varying prices. 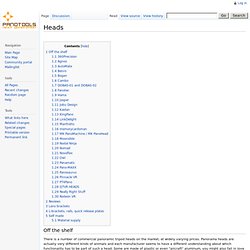 Panorama heads are actually very different kinds of animals and each manufacturer seems to have a different understanding about which functionality has to be part of such a head.