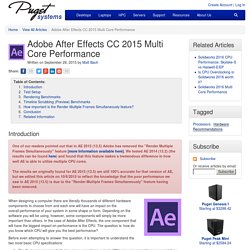 We tested AE 2014 (13.2) (the results can be found here) and found that this feature makes a tremendous difference in how well AE is able to utilize multiple CPU cores. The results we originally found for AE 2015 (13.5) are still 100% accurate for that version of AE, but we edited this article on 10/6/2015 to reflect the knowledge that the poor performance we saw in AE 2015 (13.5) is due to the "Render Multiple Frames Simultaneously" feature having been removed. When designing a computer there are literally thousands of different hardware components to choose from and each one will have an impact on the overall performance of your system in some shape or form. Depending on the software you will be using, however, some components will simply be more important than others. Test Setup. AE specs. CUDA GPU performance comparison. Danny Princz and I have been doing a series of tests using various nvidia graphics cards and After Effects new ray trace engine. 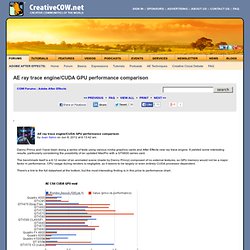 It yielded some interesting results, particularly considering the possibility of an updated MacPro with a GTX600 series card. The benchmark itself is a 6:12 render of an animated scene (made by Danny Princz) composed of no external textures, so GPU memory would not be a major factor in performance. CPU usage during renders is negligible, so it seems to be largely or even entirely CUDA processor dependent.

There's a link to the full datasheet at the bottom, but the most interesting finding is in this price to performance chart. The lower number suggests a lesser value. Secondary take away, the 600s are not a friend to CUDA processing. More data here and a full link bellow: Online Editor | Colorist | Post Super | VFX Artist | BD Author. NVIDIA Kepler versus Fermi in Adobe After Effects CS6 - Benchmarking NVIDIA CUDA performance. Unlock Enable MPE Hack Mod. 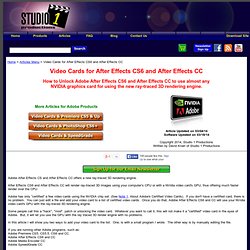 After Effects CS6 and After Effects CC will render ray-traced 3D images using your computer’s CPU or with a NVidia video card's GPU, thus offering much faster render over the CPU. Adobe has only “certified” a few video cards using the NVIDIA chip set. (See Note 1, About Adobe's Certified Video Cards). If you don't have a certified card, there is no problem.

You can just edit a file and add your video card to a list of certified video cards. Some people call this a "hack", "mod", patch or unlocking the video card. In this article I will show you two ways to add your video card to the list. If you are running other Adobe programs, such as: Adobe Premiere CS5, CS5.5, CS6 and CC Adobe After Effects CS6 and CC Adobe Media Encoder CC Adobe SpreedGrade CC You can enable these programs to use the GPU, with the program I wrote or again by manually editing the list. Video Card Drivers 1. The Quadro FX 3800. MediaMotion Contact. Hi Folks, I spent a couple of weeks trying to come up with a portable benchmark test that I felt would better test all of the resources of a system, not just its ability to calculate fractal noise (although there is certainly some fractal noise involved in my project as well). 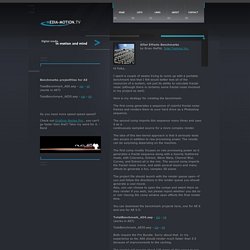 Here is my strategy for creating the benchmark: The first comp generates a sequence of colorful fractal noise frames and renders them to your hard drive as a Photoshop sequence. The second comp imports this sequence many times and uses it as a continuously-sampled source for a more complex render. The idea of this two-tiered approach is that it seriously tests disc access in addition to raw processing power. The first comp mostly focuses on raw processing power as it generates a fractal sequence along with a heavily feathered mask, with Colorama, Extract, Wave Warp, Channel Blur, Curves, and Extract all in the mix. You can download the benchmark projects here, one for AE 6 and one for AE 5.5: