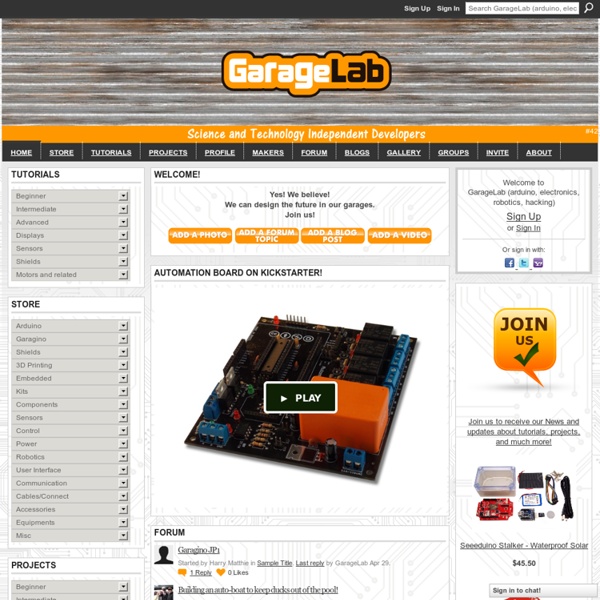 RF24Network for Wireless Sensor Networking | maniacbug RF24Network is a network layer for Nordic nRF24L01+ radios running on Arduino-compatible hardware. It’s goal is to have an alternative to Xbee radios for communication between Arduino units. It provides a host address space and message routing for up to 6,000 nodes. The layer forms the background of a capable and scalable Wireless Sensor Network system. At the same time, it makes communication between even two nodes very simple. Today, I managed to get 17 nodes running on a single network. Hardware The fastest way to get RF24Network-compatible hardware is to build the Getting Started board, or the ProtoShield board as explained in other posts, attached to commercially-available Arduino. Ultimately, I wanted something smaller, cheaper and more power-efficient, so I built a Low Power Wireless Sensor Node. Simple Transmit/Receive The Hello World examples illustrate how simple it is to communicate between two nodes. There are three simple sections: Static Initialization setup() Receiver loop()

ArduinoBoardLeonardo Overview The Arduino Leonardo is a microcontroller board based on the ATmega32u4 (datasheet). It has 20 digital input/output pins (of which 7 can be used as PWM outputs and 12 as analog inputs), a 16 MHz crystal oscillator, a micro USB connection, a power jack, an ICSP header, and a reset button. It contains everything needed to support the microcontroller; simply connect it to a computer with a USB cable or power it with a AC-to-DC adapter or battery to get started. The Leonardo differs from all preceding boards in that the ATmega32u4 has built-in USB communication, eliminating the need for a secondary processor. Summary Schematic & Reference Design EAGLE files: arduino-leonardo-reference-design.zip Schematic: arduino-leonardo-schematic-rev3b.pdf Power The Arduino Leonardo can be powered via the micro USB connection or with an external power supply. External (non-USB) power can come either from an AC-to-DC adapter (wall-wart) or battery. The power pins are as follows: VIN. Memory AREF.

The Ham Whisperer: Ham Courses Here is a compilation of all the course lessons done so far. If you have trouble with one of the questions on the quizes or practice exams, take note of which section from the question pool your question is associated with and find the lesson below. If you ever have any questions, please leave them in the comments box. Thanks! Technician Class License Course (Valid through June 2018) CHIPPER BOARD | Built By Ben For sale Created to make ATtiny chips easier to work with the Chipper Shield – a custom PCB – is on its 3rd generation and encompasses all of the core components to get your next project up and running. Purchase A Chipper – Chipper Circuit Board Files - Sponsors 100% Arduino compatibleProgram ATtiny 85/45/25/15/13 84/44/24 2313/4313 chips.Debug your program through 2 LEDs and broken out sensor port.Compatible with either an Arduino board or AVR programmerHouse sensors on the proto area of the board with access to broken out power and ground.Reset a chip mid-program through the reset button. Chipper Board Companion Guides: Datasheets: Photos: Like this: Like Loading...

Lyrical English | Free Song Based Lesson Plans arduino-tiny - ATtiny core for Arduino Arduino-Tiny is an open source set of ATtiny "cores" for the Arduino platform. The Arduino platform currently supports Atmel ATmega processors. There is a need for the Arduino platform to work with physically smaller DIP package processors. Download the latest version for Arduino 1.0 Download the latest version for Arduino 1.5 Arduino libraries available for ATtiny processors... I2C / TWI Master library for the ATtiny85 Alternatives to this core (as of 2010-Nov-16)... bohne (René Bohne) published '2313 and '84 cores... SuperCow (R.Wiersma) published an '84 core... saposoft (Alessandro Saporetti) published a '45 core... The MIT High-Low Tech group published a '45 / '85 core... I believe macsimski has published an '85 core but I can't find a link. (Thank you to everyone above!)

Blog | Hackaday | Fresh hacks every day | Page 2 Does your dog or cat wake you up every morning, demanding to be fed? Maybe you feed Sparky in the evenings instead. But doesn’t that limit your spontaneity? It sure limited [Jorge]’s after-work plans. He has two dogs that eat the same type of food, but in different quantities. [Jorge] started by modeling his requirements in 3D. The dispenser is designed around a PIC18F2420. If you want to dispense single doses of food on a timer, check out this automatic cat feeder made from scavenged parts. Continue reading “Dual Pet Food Dispenser is Doubly Convenient” The ESP8266 is an incredible piece of hardware; it’s a WiFi module controllable over a serial port, it’s five freaking dollars, and if that’s not enough, there’s a microcontroller on board. The most common version of the ESP, the -01 version, only has a 2×4 row of pins for serial, power, configuration, and two lines of GPIO. As a proof of concept, it’s great, but there’s more than one ESP module out there. Video below.

Labs, Inc. | Arduino Comparison Chart - CMiYC Labs, Inc. When getting started with the Arduino, the shear number of board options can be intimidating. While the variety is a great option, it can be daunting to a new user. Many people are afraid of selecting the wrong board, or their budget doesn’t allow for buying multiple boards. Just looking at the “official” boards listed on the Arduino.cc site, there are 14+ different Arduino board types to consider. Then there are a variety of 3rd-party boards with their own uniqueness. This publicly editable Arduino Comparison Table is a one-stop place to compare key features of Arduino boards, such as Input Voltage, I/O Pins Available, and Connectivity options. Visit the Google Docs Spreadsheet to use filters and sort by the various parameters. [View Full Table] | [Edit and Filter Chart]