An introduction to Cherry MX mechanical switches. Mechanical keyboards are defined by their switches. 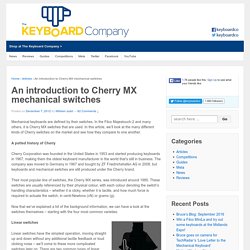 In the Filco Majestouch-2 and many others, it is Cherry MX switches that are used. In this article, we’ll look at the many different kinds of Cherry switches on the market and see how they compare to one another. A potted history of Cherry Cherry Corporation was founded in the United States in 1953 and started producing keyboards in 1967, making them the oldest keyboard manufacturer in the world that’s still in business.

The company was moved to Germany in 1967 and bought by ZF Friedrichshafen AG in 2008, but keyboards and mechanical switches are still produced under the Cherry brand. Are processors pushing up against the limits of physics? When I first started reading Ars Technica, performance of a processor was measured in megahertz, and the major manufacturers were rushing to squeeze as many of them as possible into their latest silicon. 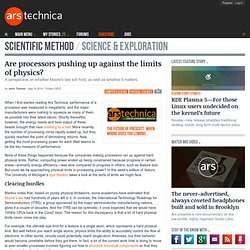 Shortly thereafter, however, the energy needs and heat output of these beasts brought that race crashing to a halt. More recently, the number of processing cores rapidly scaled up, but they quickly reached the point of diminishing returns. Now, getting the most processing power for each Watt seems to be the key measure of performance. None of these things happened because the companies making processors ran up against hard physical limits. Rather, computing power ended up being constrained because progress in certain areas—primarily energy efficiency—was slow compared to progress in others, such as feature size.

Solid State Drives Break the 50 Cents Per GiB Barrier, OCZ ARC 100 Launched. The BS Of Benchmarking - GeForce GTX 570 Review: Hitting $349 With Nvidia's GF110. There is a lot of jockeying for position that goes on behind the scenes in the graphics business. 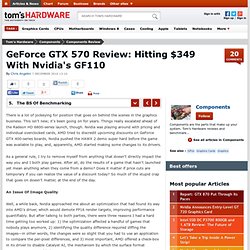 This isn’t new; it’s been going on for years. Things really escalated ahead of the Radeon HD 6800-series launch, though. Nvidia was playing around with pricing and individual overclocked cards, AMD tried to discredit upcoming discounts on GeForce GTX 400-series boards, Nvidia pushed the HAWX 2 demo super hard before the game was available to play, and, apparently, AMD started making some changes to its drivers.

As a general rule, I try to remove myself from anything that doesn’t directly impact the way you and I both play games. After all, do the results of a game that hasn’t launched yet mean anything when they come from a demo? An Issue Of Image Quality. Reversible Type-C USB Connector Ready For Production. New Display Technology Corrects For Vision Defects. New research: Flash is DEAD. Yet resistance isn't futile - it's key. The Essential Guide to IT Transformation Flash is at a crossroads. 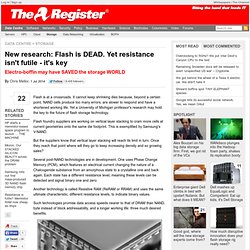 It cannot keep shrinking dies because, beyond a certain point, NAND cells produce too many errors, are slower to respond and have a shortened working life. Yet a University of Michigan professor's research may hold the key to the future of flash storage technology. PCIe hard drives? You read that right, says WD. WD will demo PCIe-connected disk drives at the Computex tech conference in Taipei, using a SATA Express interface. 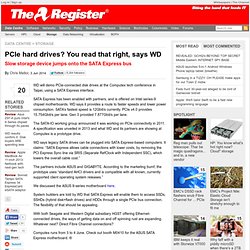 SATA Express has been enabled with partners, and is offered on Intel series-9 chipset motherboards. Ars Technica System Guide: November 2013. Since the early 2000s, the Ars System Guides have been helping those interested become "budding homebuilt system-building tweakmeisters. 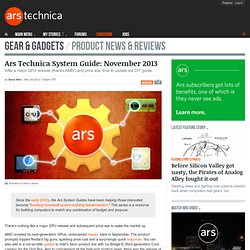 " This series is a resource for building computers to match any combination of budget and purpose. There's nothing like a major GPU release and subsequent price war to wake the market up. AMD unveiled its next-generation GPUs, codenamed Hawaii, back in September. The product promptly topped Nvidia's big guns, sparking price cuts and a surprisingly quick response.

Home 3D printers take us on a maddening journey into another dimension. This started off as a review of the Printrbot Simple, a low-cost 3D printer by the people at Printrbot in California. 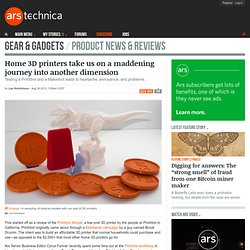 Printrbot originally came about through a Kickstarter campaign by a guy named Brook Drumm. The intent was to build an affordable 3D printer that normal households could purchase and use—as opposed to the $2,000+ that most other home 3D printers go for. Ars Senior Business Editor Cyrus Farivar recently spent some time out at the Printrbot workshop in Lincoln, and while he was out there, Brook Drumm and the other Printrbot folks offered to send a review unit to Ars. Got it taped: The business of tape-based disaster recovery. Protecting your mid-size business from today’s security threats Feature For many SMEs, tape disappeared from their landscape as a data storage choice ten or more years ago. 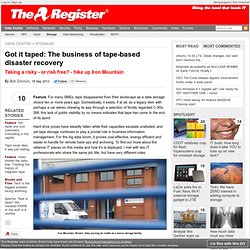 Domestically, it exists, if at all, as a legacy item with perhaps a car stereo chewing its way through a selection of fondly regarded C-90s. Still, this lack of public visibility by no means indicates that tape has come to the end of its spool. Hard drive prices have steadily fallen while their capacities escalate unabated, and yet tape storage continues to play a pivotal role in business information management.

For the big data boom, it proves cost-effective, energy efficient and easier to handle for remote back-ups and archiving. Iron Mountain, Bristol: daily proving its mettle as a secure storage facility. Ready to bin your USB cables yet? Wireless USB hops on WiGig bandwagon. High performance access to file storage. 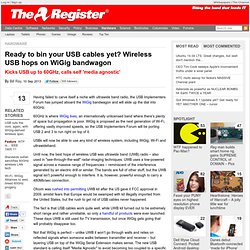 The future of PCIe: Get small, speed up, think outside the box. High performance access to file storage IDF13 The near-ubiquitous PCI Express interconnect – aka PCIe – is finding its way into mobile devices, working its way into cabling, and is on schedule to double its throughput in 2015 to a jaw-dropping 64 gigabytes per second in 16-lane configurations. 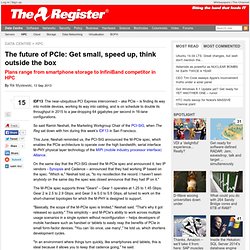 So said Ramin Neshati, the Marketing Workgroup Chair of the PCI-SIG, when The Reg sat down with him during this week's IDF13 in San Francisco. This June, Neshati reminded us, the PCI-SIG announced the M-PCIe spec, which enables the PCIe architecture to operate over the high bandwidth, serial interface M-PHY physical layer technology of the MIPI (mobile industry processor interface) Alliance. Flash! Ah-ahh! Saviour of the universe? It'll save every one of us? High performance access to file storage You can get a great picture of what's happening in the flash memory storage market by looking at the presentations from the recent Flash Memory summit here (warning, it's swimming in PDFs).

Over 150 documents are listed here, with file names reflecting their date of publication and the last name of their author, but fortunately, the summit's hosts list them all by date, title, session type and author. Cisco. Fortinet. LG. Apple. The data centre design that lets you cool down – and save electrons. I started my commercial data centre experience in London in the late 1990s. Thinking of following Facebook and going DIY? Think again. DIY vs COTS: Part 1 Microsoft is doing it, Apple is doing it – so is IBM. The giants are spending billions of dollars building fantastic data centres. But what about the rest of us? Do you walk in the footsteps of the giants and Do It Yourself (DIY) or buy something Commercial, Off The Shelf (COTS): it's an ages-old debate.

Will flash save the data centre? Don't spread your wings yet, Vultan. Analysis The all-flash data centre: does it exist? Will it ever? Can we really imagine a data centre with no spinning disks and all the executing apps relying on solid-state storage? Such is the vision put forward by Violin Memory in its "Disk is Dead" campaign. X500 Server - Rugged Mobile Server. Radeon HD 5450 review - DXVA video performance. DXVA video performance Watching 1080P DXVA videos processed by your GPU The x.264 format is often synonym with Matroska MKV, a media file container which often embeds that x.264 content, a much admired container format for media files.