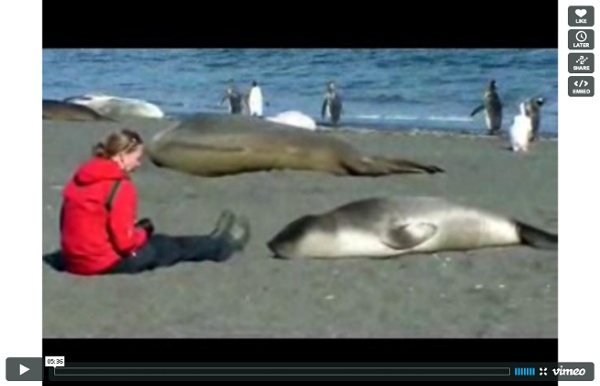 Hoover, the talking seal Hoover (1971? – July 25, 1985) was a harbour seal who was able to imitate basic human speech.[2] He was an orphan when he was found by George and Alice Swallow in Maine in 1971. George and Alice decided to take him home. At first the baby seal didn't want to eat, but soon he ate at the pace of a Hoover (hence his name). stillphotos Still Photos of Ruby-throated Hummingbirds Page One Page Two Page three Page Four A Breathtaking Video About Urban BASE Jumping in Singapore - Video As if leaping from the top of a 55-story resort weren't spectacular enough, this video uses Singapore's futuristic skyline and Marina Bay Sands Skypark as a backdrop. The video was directed by Snow R. Shai of Snowdrum Audio Visual, and the BASE jumpers are Marta Empinotti, James Pouchert, Amanda Vicharelli, Anne Helliwell, Tim Mattson, Brendon Cork and Jeb Corliss.

Silly Sea lion ready for his close up! Random photo Submit your photo Stumble Thru animal photography Tags: 30 Photos of Cute Baby Animals That Can Change Your Mood Advertisement Being cute is somewhat akin to being a little baby child with a general feel of lovability and affection towards the outlook of the body stature. Cuteness is best demonstrated through small babies who have all the key features that usually attract the eyes of all and sundry and make a person loveable yet there remains an ever so impossible burning desire to own the intangible aspects. Not only the physical appearance but all the subtle behavioral attributes such as a bit of curiosity, pampered but measured arrogance and all other childlike features comprise the cuteness.

Mitik, The Orphaned Baby Walrus Earlier this year, fisherman off the coast of Alaska rescued an orphaned baby walrus. Named ‘Mitik’ by the 14 year old daughter of one of the rescuers, the adorable five week old baby walrus was then sent to the New York Aquarium via Anchorage. After surviving a bladder infection and Hurricane Sandy, Mitik is now doing well in his new home in Coney Island, Brooklyn. Animal Sleep Most animals have a daily pattern of rest and activity. Some animals are more active during the day (diurnal) and some are more active during the night (nocturnal). How much time do animals spend sleeping? Well, it depends on the animal: References: This table was adapted from four sources: Aserinsky, E., Eyelid condition at birth: relationship to adult mammalian sleep-waking patterns, In Rapid Eye Movement Sleep, edited by B.N.

Divers meet extremely playful wild seals Wanna play? Here's a fun one that is sure to put you in a good mood. Jason Neilus, along with some friends, dove in the waters off the coast of the Farne Islands, near Northumberland, England. About a dog called 'Faith'.. This dog was born on Christmas Eve in the year 2002. He was born with 2 legs - He of course could not walk when he was born. Even his mother did not want him. His first owner also did not think that he could survive and he was thinking of 'putting him to sleep'. But then, his present owner, Jude Stringfellow, met him and wanted to take care of him. She became determined to teach and train this little dog to walk by himself..

Walruses Found Using Birds as Toys for First Time What do you get the walrus that has everything? Don’t waste your money on Furbys and Tickle Me Elmos. According to a new study, what walruses really want to play with are bird carcasses. It may surprise you to learn that walruses are playful creatures—and you wouldn’t be alone.