Nearly 200 Florida manatees filmed basking in shallow waters with dolphins Video is unusual in that it captures species that don’t interact often in high numbers as manatee numbers are down @FIUCASE @Upworthy. Will mangrove forests save us from climate change? - Assoc Prof Dan Friess.

Twitter. *****Nature Cartoon of the day: The revenge of the Mangroves @JaninaMorejon. Awesome stuff if you are covering mangrove swamps as an ecosystem In #Senegal they are have been replanting #mangrove swamps to protect the environment and help tackle #climatechange and #globalwarming #geography #geographyteacher. Mada #Mangroves forest is a bio-diversified zone which gives shelter to 156 species of plants and 35 species of birds and animals. Please don’t encroach their habitat. □□□ #SaveMadaForestFromJagan. Seagrass ~ Maldives Resilient Reefs. Geography made easy sur Twitter : "Another awesome use of #drone technology to plant mangrove swamps with seed missiles. It’s proven to work and expecting to plant 4 million new mangrove trees to assist with #coastalerosion and #climatechange #geography #

Worldview International Foundation sur Twitter : "Mangroves Help Fight The Effects Of Climate Change. So Why Is Mumbai Destroying Them? The roots of mangroves, poking through swamp mud, serve as breeding areas for fish.… The importance of mangroves. And why we must save them.… *****The relationship between Mangroves Forests and Ocean Currents. The solid boxes are mangrove-limiting currents and the dashed boxes are mangrove-enhancing currents. Warm (and cold) currents limit or expand the latitudinal. Manatees are known as 'sea cows' because of their similar size, peaceful temperament and diet of plants and weeds. When a herd of about ten of them calmly swims below, you can just silently watch them go by. Seagrass saves beaches and money.

Scale model showing how mangrove forests protect the coast from wave erosion… What's happens when you cut down #mangroves… The pneumatophores of a mangrove tree. These are vertical root projections that 'breathe' air when the tide is low.… Seagrass meadows – carbon sinks and fishery powerhouses. The most underappreciated of marine ecosystems, the humble seagrass meadow. 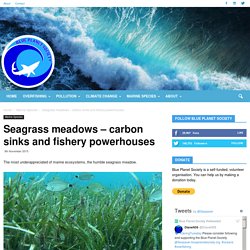 I might be biased, but seagrass meadows are just a little bit fantastic. Seagrasses are admirable in that they do a lot just by being themselves; they are the strong silent type, happy for their flashy coastal colleagues the coral reefs to get all the adoration, whilst they quietly continue in the background, churning out the next generation of baby fish, and sinking lethal dissolved carbon into the seabed. To borrow a rugby analogy, they are the second rows of the coastal seascape, working hard in the ‘engine room’ whilst it’s the ‘pretty’, ‘flashy’ backs that grab the headlines with their razzle-dazzle. Seagrass meadows are barely recognised on the world stage, and hardly ever make the front page news, but they are essential to our metaphorical team’s success, week in, week out. Seagrass meadows provide carbon capture storage at rates up to 100 times greater than rainforests.

*****Scale model showing how mangrove forests protect the coast from wave erosion / tsunamis. *****Mangroves ecosystems: In the land of erosion, erosion becomes an art. Join us for a visual trip to Qeshm Island, a new UNESCO #Geopark □️ *****Thirsty mangroves cause unprecedented dieback - JCU Australia. ***Mangroves may be one of nature's best defenses against a changing climate. The human element of mangrove management. Some countries have recognised the critical role mangrove forest management can play in climate mitigation - but others must catch up, says Stephen Brooks of USAID As global climate change continues to threaten coastal communities in the tropics, governments have increasingly focused on the promotion and conservation of mangrove forests for their protective qualities. 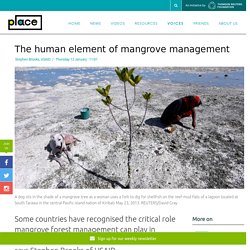 Mangroves — trees and shrubs that grow in tropical estuaries — are among the world’s most productive ecosystems and, compared to other forest systems, have an impressive capacity to sequester and store carbon at high rates. They also serve as an important physical buffer, protecting coastal areas from storm surges and acting as “bioshields.” Despite these clear benefits, since 1980 the world has lost approximately 20 percent of its mangrove forests.

With this in mind, there is a growing need to understand the factors, both biophysical and societal, that contribute to sustainable mangrove management. In 2016, the U. African Wetlands Project: A Win For the Climate and the People? by Winifred Bird: Yale Environment 360. 03 Nov 2016: Report by winifred bird Standing calf-deep in the warm, brackish water of Senegal’s Saloum Delta, Saly Sarr points to a mass of ripples colored silver by the setting sun. 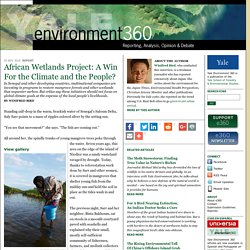 “You see that movement?” She says. Blue future. Over the past decade, scientists and policymakers have joined efforts to create a science-based framework under the auspices of the United Nations to protect our remaining tropical forests. 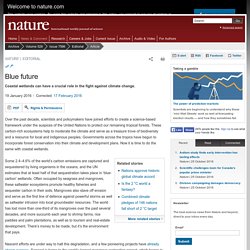 These carbon-rich ecosystems help to moderate the climate and serve as a treasure trove of biodiversity and a resource for local and indigenous peoples. Governments across the tropics have begun to incorporate forest conservation into their climate and development plans. Mumbai's mangroves under threat (video clip) Call for more protection for seagrass meadows. Image copyright Frogfish Seagrasses - the underwater plants that act as nursery grounds for young fish - need more protection, say scientists.

The most threatened ecosystem you’ve never heard of. October 12, 2016 — What covers up to 600,000 square kilometers (230,000 square miles) of Earth’s surface, provides benefits worth an estimated US$570 billion or more each year, and is rapidly being lost due to human activity? 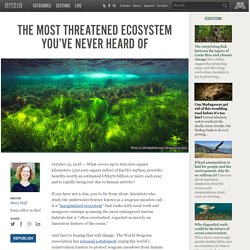 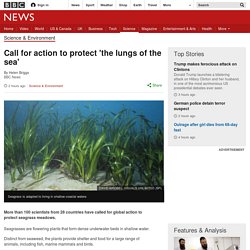 Seagrasses are flowering plants that form dense underwater beds in shallow water. Distinct from seaweed, the plants provide shelter and food for a large range of animals, including fish, marine mammals and birds. Many seagrass meadows have been lost because of human activities, say researchers. Vietnam sweats bullets as China and Laos dam the Mekong. This is the second article of an in-depth, four-part series exploring threats facing the Mekong Delta and how they might be addressed. 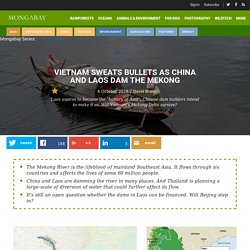 Read the first installment here. Nothing that influences the future of Vietnam’s Mekong Delta induces more angst than the hydroelectric dam projects on the mainstream of the Mekong, upriver from the Delta. A handful of Vietnamese experts have been sounding the alarm for years. That hasn’t translated to effective diplomacy by the government in Hanoi, which may have concluded — perhaps correctly — that resistance is futile. Upstream diversion impacts: Scientists highlight risks of hydropower dams in the Mekong Delta for COP21 delegates. Hydropower dams are being promoted as sustainable development around the world, especially in tropical river basins, despite numerous warnings from scientists that the dams come with grave impacts for ecosystems, biodiversity, the rights of local communities and the global climate. 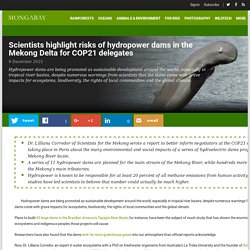 Plans to build 43 large dams in the Brazilian Amazon’s Tapajós River Basin, for instance, have been the subject of much study that has shown the enormous harm to rainforest ecosystems and indigenous peoples those projects will cause. Researchers have also found that the dams emit far more greenhouse gases into our atmosphere than official reports acknowledge. 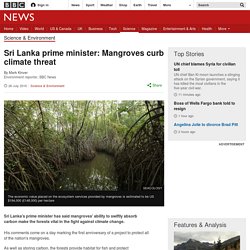 His comments come on a day marking the first anniversary of a project to protect all of the nation's mangroves. As well as storing carbon, the forests provide habitat for fish and protect communities from tsunamis and cyclones. Protecting mangroves, Kenya's fishermen net cash - and more ... Coastal Kenyan community earns $30,000 in two years selling carbon credits from mangroves they protect By Moraa Obiria GAZI BAY, Kenya, Sept 27 (Thomson Reuters Foundation) - For fishing communities on Kenya's southern coast, felling mangrove trees to make boats has long been a part of life. But traditional attitudes toward the mangroves are shifting, as communities become aware of a new benefit from keeping the trees standing: cash payments for carbon storage. Local people who are protecting and replanting mangroves are now selling 3,000 tonnes of carbon credits a year to international buyers, for about $5-$6 a tonne. The money goes into financing more forest protection and restoration, and to community-chosen projects.

Besides protecting the trees themselves, the effort aims to improve local fisheries, as many species of fish breed and raise their young in shoreline mangroves, and build resilience to worsening storm surges and coastal erosion, which can be slowed by mangroves. Are U.S. Tax Dollars Financing Destruction of World’s Largest Mangrove Forest? In conjunction with the Save the Sundarbans protest today at the UN's headquarters in New York City, we're revealing in this EcoWatch exclusive that Friends of the Earth U.S. obtained documents that suggest the U.S. Export-Import Bank, Ex-Im Bank, which is supported by taxpayer dollars, is considering financing the Orion-Khulna coal plant near the Sundarbans in Bangladesh.

Mangroves in the Sundarbans in Bangladesh.Mohammad Rakibul Hasan The struggle for climate justice in Bangladesh, however, did win an important battle in July. Responding to public pressure from advocacy groups, Ex-Im Bank is no longer considering financing for a coal plant proposed to be built outside Bangladesh's capital city of Dhaka, one of the largest cities in the world. This coal plant, known as the Orion-Dhaka project, would burn coal just a few miles outside Dhaka, poisoning the air and water of 17 million people. Battle Won, But Fight Continues Sundarbans Tiger Reserve.Dibyendu Ash. Mangroves: 'Let mangroves recover' to protect coasts. Image copyright Mark Spalding Allowing mangrove forests to recover naturally result in more resilient habitats that benefit both wildlife and people, say conservationists.

In Indonesia, a Wetlands International project uses permeable dams to restore sediment needed for the trees to grow. The charity says early results suggest "ecological restoration" is more effective than planting programmes. More than half of the world's most at-risk habitats have been felled or lost over the past century, UN data shows. Image copyright Wetlands international. Sri Lanka prime minister: Mangroves curb climate threat.