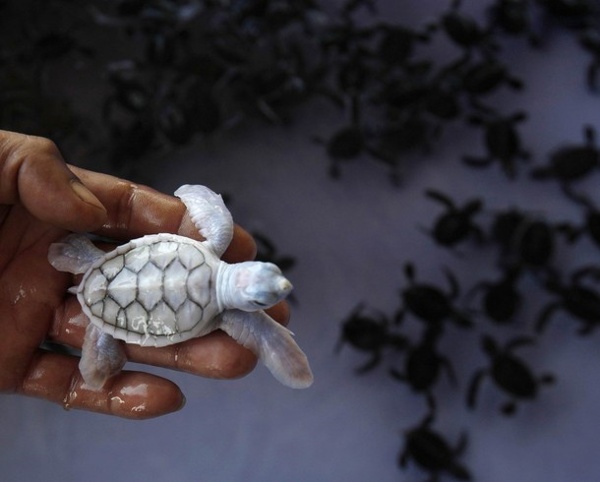 Just like home: Adorable baby dolphin rescued and hospitalised A baby dolphin is lowered into a swimming pool just hours after being rescued. The mammal was discovered by walkers on a beach near the Uruguayan capital, Montevideo. It was suffering from injuries believed to have been caused by a fishing net. There was no sign of its mother. The dolphin is only about ten days old. Richard Tesore, head of the NGO Rescate Fauna Marina, has been caring for tiny animal in Piriapolis, 62 miles east of the capital, Montevideo.And while his cute charge is a hit with visitors, it seems they must queue behind a penguin if they want to see him. Information and image sources: 1 2

Meet Ruth The Tiny Baby Sloth Published on Sunday, October 17, 2010 by administrator EmailShare 2EmailShare The Rosamond Gifford Zoo has an exceptionally sleepy and exceptionally adorable new addition – a 6-week-old baby Hoffman’s Two-toed Sloth. Born underweight, Ruth as she has been named has bounced back thanks to keepers supplanting her nursing with nutritional formula. After years of tremendous success with its sloth breeding program, the zoo took a 16 year hiatus. Though zoo staff initially supplemented her diet with formula, she is now thriving under the care of her mother. Sloths are identified by the number of long, prominent claws that they have on each front foot. News: The 10 Most Disturbing Books Of All Time In my younger days if I heard a book or movie was disturbing or hard to handle I generally took that as a challenge. Most books generally turned out to not be too bad, but occasionally I’d come across something that would leave me with a sick feeling in my stomach for weeks. I’ve largely outgrown this “genre” of late, but here are my picks for the ten most disturbing books of all time. 10. Blindness is a book with a truly horrifying scenario at it’s heart: what if everyone in the world were to lose their sight to disease in a short period of time? 9. Anti drug crusaders should stop airing goofy commercials that nobody takes seriously and start pushing to have Requiem For A Dream made required reading for every high schooler in the country. 8. Naked Lunc is another ode to drug addiction. 7. 6. Bleak. Cormac McCarthy’s novel deals with a father and son dealing with a cataclysmic event (probably a meteor strike) that has left the world barren and gray. 5. 4. 3. 2. 1.

Cute Orphan Dolphin Saved There was no sign of its mother. The Dolphin is only about ten days old. 10 day old Flipper was discovered by walkers on a beach near Montevideo, Uruguay. A penguin watches as Tesore holds the baby Dolphin image credits Source You may also like : Tatiana Mikhina - Photographer Biography, Photography A member of the photo.net community since May 25, 2006. (Give this person a gift subscription) Photographer Biography User Reviews 0 user reviews Gallery Photos (190 photographs total) Folders Comments on Gallery Photos 32 total Photography Critique Requests 151 total Current as of: Sun Apr 27 10:39 Ratings See this user's ratings Amazing Animals The 13 scariest books of all time NOT written by Stephen King Yes, we all know King is the Sultan of Scare, and that books like The Shining, Salem's Lot, and It will make you quake in your fuzzy slippers. But here are 13 books that'll start the shivers while spreading the wealth. SILENCE OF THE LAMBS Thomas Harris This isn't the first time we'd meet the psychopathic Hannibal Lecter—that'd be Red Dragon—but it was the most eerie. And what's more, he wasn't the only serial baddie at work: Buffalo Bill took his share of trophies as Silence of the Lambs worked its way into the public's collective cerebral cortex. GHOST STORY Peter Straub Four men, comfortable in their middle-agedness, never speak of the young woman they killed 50 years before and buried in a watery grave. THE ROAD Cormac McCarthy DRACULA Bram Stoker It may be an oldie—one of the oldie-est, actually—but Stoker's Dracula is the fount from which incarnation of the modern vampire draws power. THE EXORCIST William Peter Blatty THE HAUNTING OF HILL HOUSE Shirley Jackson THE CIPHER Kathe Koja