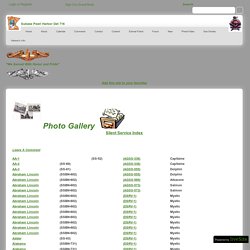 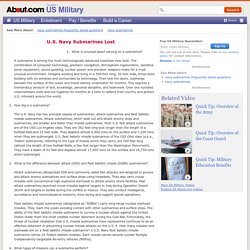 Navy Submarines Lost What is unusual about serving on a submarine? World's Biggest Submarines Typhoon Class. How a World War II Submarine Works (720p) New investment in Successor submarines - News stories. The Successor submarines, which will carry the UK’s strategic nuclear deterrent, will be the largest and most advanced boats operated by the Navy, and their design and construction will be the most technologically complex in the history of the UK. 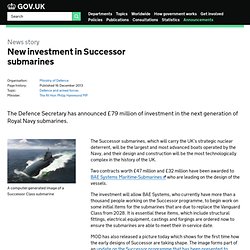 Two contracts worth £47 million and £32 million have been awarded to BAE Systems Maritime-Submarines who are leading on the design of the vessels. The investment will allow BAE Systems, who currently have more than a thousand people working on the Successor programme, to begin work on some initial items for the submarines that are due to replace the Vanguard Class from 2028. It is essential these items, which include structural fittings, electrical equipment, castings and forgings are ordered now to ensure the submarines are able to meet their in-service date. MOD has also released a picture today which shows for the first time how the early designs of Successor are taking shape. Defence Secretary Philip Hammond said: Fate. Submarines. INSIDE LOOK at 21st CENTURY STEALTH SUBMARINE (Full Documentary) HD Quality. World War II Submarine Warfare - rare footage.

U Boat War : Documentary on the Submarine Battle of World War 2. USS Sabalo SS-302. USS Pomodon SS-486. USS Clamagrore Walkthru. USS Pomodon (SS-486) USS Pomodon (SS-486), a Tench-class submarine, was the only ship of the United States Navy to be named for the Pomodon (an obsolete synonym for Hemilutjanus) genera of snapper. 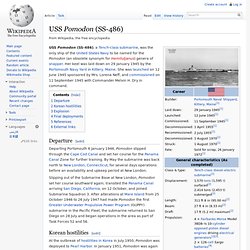 Her keel was laid down on 29 January 1945 by the Portsmouth Navy Yard in Kittery, Maine. She was launched on 12 June 1945 sponsored by Mrs. USS Cusk SS-348. USS Kamhhameha SSBN-642. The Hunley: The mystery of the Confederate Civil War submarine. For nearly 14 years, scientists, historians and a genealogist have studied the first submarine to sink an enemy vessel. 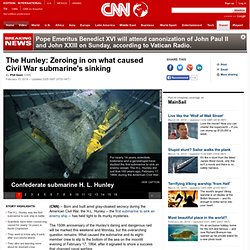 The H.L. Hunley did just that 150 years ago, February 17, 1864, during the American Civil War. The 40-foot submarine was brought up amid much fanfare off Charleston, South Carolina, in August 2000. Author Clive Cussler and a team discovered the Hunley five years earlier, buried in the sand more than 100 yards beyond its target, the USS Housatonic. Conservators later this year will begin a new process -- filling the tank that holds the Hunley with chemicals that will strip away what is called "concretion": organic material that has coated the hull and interior.