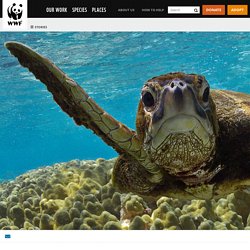 And other sea turtle facts © Leighton Lum Sea turtles have roamed the Earth’s oceans for the last 100 million years. WWF works with local communities to reduce egg harvesting and protect nesting beaches, and encourages fishers to switch to turtle-friendly equipment.Here’s a look at some common questions about sea turtles. © naturepl.com / Doug Perrine / WWF How long do sea turtles live? The actual documentation of the age of any species of sea turtle is difficult. . © naturepl.com / Jordi Chias / WWF. Green Sea Turtle Facts for Kids. When born, green sea turtles are only 5 cm (2 in) long. 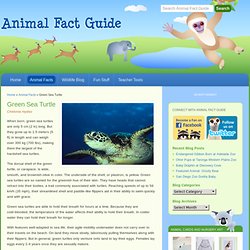 But they grow up to 1.5 meters (5 ft) in length and can weigh over 300 kg (700 lbs), making them the largest of the hardshell sea turtles. The dorsal shell of the green turtle, or carapace, is wide, smooth, and brownish-olive in color. The underside of the shell, or plastron, is yellow. Green sea turtles are so named for the greenish hue of their skin. They have heads that cannot retract into their bodies, a trait commonly associated with turtles. Green sea turtles are able to hold their breath for hours at a time. With features well-adapted to sea life, their agile mobility underwater does not carry over to their travels on the beach. To reach their nesting grounds, green turtles migrate long distances, traveling back to the beaches where they were born. Photo by Mark Sullivan, NOAA affiliate. Save the Turtles - Leatherback, Hawksbill, Green, Loggerhead, Flatback, Olive Ridley and Kemp’s Ridley Sea Turtles. Sea Turtles Sea Turtles Sea Turtles are ancient creatures. 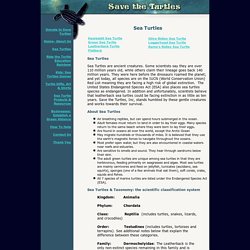 Some scientists say they are over 110 million years old, while others claim their lineage goes back 140 million years. They were here before the dinosaurs roamed the planet; and yet today, all species are on the IUCN (World Conservation Union) Red List meaning they are facing a high risk of global extinction. Sea Turtle Conservation Bonaire. Basic Facts About Sea Turtles. Sea turtles are one of the Earth's most ancient creatures. 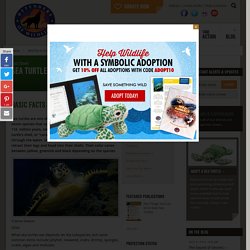 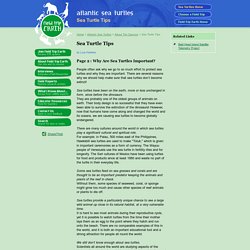 People often ask why we go to so much effort to protect sea turtles and why they are important. There are several reasons why we should help make sure that sea turtles don’t become extinct! Sea turtles have been on the earth, more or less unchanged in form, since before the dinosaurs. There are many cultures around the world in which sea turtles play a significant cultural and spiritual role. Some sea turtles feed on sea grasses and corals and are thought to be an important predator keeping the animals and plants of the reef in check. Sea turtles provide a particularly unique chance to see a large wild animal up close in its natural habitat, at a very vulnerable time. Threats to Sea Turtles. A common question we are asked at Sea Turtle, Inc. is “why are sea turtles important?” 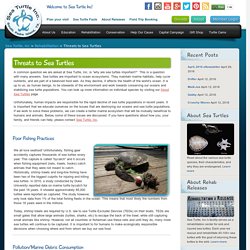 This is a question with many answers. Sea turtles are important to ocean ecosystems. They maintain marine habitats, help cycle nutrients, and are part of a balanced food web. As they decline, it affects the health of the world’s ocean. It is up to us, as human beings, to be stewards of the environment and work towards conserving our oceans and stabilizing sea turtle populations.

Unfortunately, human impacts are responsible for the rapid decline of sea turtle populations in recent years. We all love seafood! Today, shrimp trawls are required by U.S. law to use Turtle Excluder Devices (TEDs) on their boats. Marine debris is defined by NOAA as “any persistent solid material that is manufactured or processed and directly or indirectly, intentionally or unintentionally, disposed of or abandoned into the marine environment.” 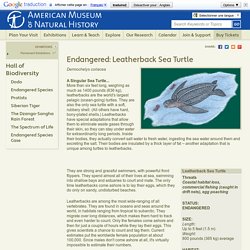 More than six feet long, weighing as much as 1400 pounds (636 kg), leatherbacks are the world's largest pelagic (ocean-going) turtles. They are also the only sea turtle with a soft, rubbery shell. (All others have hard, bony-plated shells.) Leatherbacks have special adaptations that allow them to eliminate waste gases through their skin, so they can stay under water for extraordinarily long periods. Threats Coastal habitat loss, commercial fishing (caught in drift nets), egg poaching SIZE:Length: Up to 5 feet (1.5 m)Weight: 800 pounds (365 kg) average HABITAT:Warm and temperate oceans. Illegal Poaching — SEE Turtles. Despite laws protecting sea turtles in most countries, the illegal trade of eggs, meat, and shells (known as poaching) of turtles continues to be a threat. 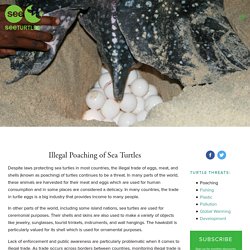 In many parts of the world, these animals are harvested for their meat and eggs which are used for human consumption and in some places are considered a delicacy. In many countries, the trade in turtle eggs is a big industry that provides income to many people. Sea Turtles and Humans - Sea Turtle Facts and Information. Sea Turtles and Humans Humans and sea turtles aren’t a good mix, and it is due to the selfish actions of many humans that sea turtles are an Endangered Species at this time. 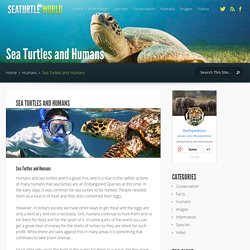 In the early days, it was common for sea turtles to be hunted. People needed them as a source of food and they also consumed their eggs. However, in today’s society we have other ways to get meat and the eggs are only a delicacy and not a necessity. Still, humans continue to hunt them and to kill them for food and for the sport of it. Sea turtles rely upon the food in the water for them to survive. Sea Turtles are an Endangered or Threatened Species. Sea turtle populations have been seriously reduced worldwide through a number of human influences. 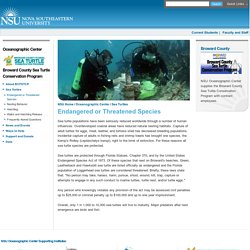 Overdeveloped coastal areas have reduced natural nesting habitats. Capture of adult turtles for eggs, meat, leather, and tortoise shell has decreased breeding populations. Incidental capture of adults in fishing nets and shrimp trawls has brought one species, the Kemp's Ridley (Lepidochelys kempi), right to the brink of extinction. For these reasons all sea turtle species are protected. Sea turtles are protected through Florida Statues, Chapter 370, and by the United States Endangered Species Act of 1973. Any person who knowingly violates any provision of the act may be assessed civil penalties up to $25,000 or criminal penalty up to $100,000 and up to one year imprisonment.