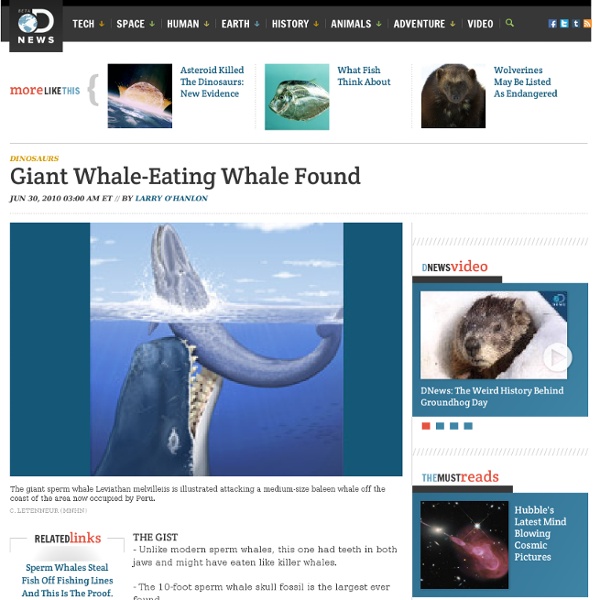 - Unlike modern sperm whales, this one had teeth in both jaws and might have eaten like killer whales. - The 10-foot sperm whale skull fossil is the largest ever found. - Its main food might have been baleen whales. The massive skull and jaw of a 13-million-year-old sperm whale has been discovered eroding from the windblown sands of a coastal desert of Peru. The extinct cousin of the modern sperm whale is the first fossil to rival modern sperm whales in size -- although this is a very different beast, say whale evolution experts. "We could see it from very far," said paleontologist Olivier Lambert of the Muséum National d'Histoire Naturelle in Paris, France, who led the team which found the fossil. PHOTOS: Mammals of the Sea The giant 3-meter (10-foot) skull of what's been dubbed Leviathan melvillei (in honor of the author of "Moby Dick") was found with teeth in its top and bottom jaws up to 36 centimeters (14 inches) long. VIDEO: Why is Whale Vomit So Valuable?

10 Most Amazing Extinct Animals From the Quagga --half zebra, half horse-- to the Irish Deer --the largest deer that ever lived--, an impressive list with pictures of amazing animals we will never see. Tyrannosaurus Rex (extinct 65 million years ago) [Wiki] Tyrannosaurus rex was one of the largest land carnivores of all time, measuring up to 43.3 feet long, and 16.6 ft tall, with an estimated mass that goes up to 7 tons. Like other tyrannosaurids, Tyrannosaurus was a bipedal carnivore with a massive skull balanced by a long, heavy tail. Fossils of T. rex have been found in North American rock formations dating to the last three million years of the Cretaceous Period at the end of the Maastrichtian stage, approximately 68.5 to 65.5 million years ago; it was among the last dinosaurs to exist prior to the Cretaceous-Tertiary extinction event. Quagga: half zebra, half horse (extinct since 1883) [Wiki] The quagga was originally classified as an individual species, Equus quagga, in 1788. More Info:

7 Extinct Giant Versions of Modern Animals The animal kingdom is loaded with some pretty formidable creatures, a few of which we as humans are only barely able to keep in line even with modern technology. As it turns out, many of these species are the diminutive descendents of giants so mind bogglingly huge and terrifying that they could probably take over the entire world with minimal effort. Meganeura, The Giant Dragonfly Meganeura were enormous dragonfly-like insects with wingspans the length of an average toddler, making them among the largest flying predatory insects in the history of the world. Some scientists think that Meganeura were actually too big to be able to survive in the current atmosphere, citing the higher oxygen concentration in the prehistoric world as the only way an insect its size would be able to breathe in enough to support its massive body. Why it's a Good Thing They're Dead: That. Jaekelopterus rhenaniae, The Giant Sea Scorpion Particularly if you picture it swimming up and pinching your scrotum. Exhibit A.

Extinct ibex is resurrected by cloning It has also increased the possibility that it will one day be possible to reproduce long-dead species such as woolly mammoths and even dinosaurs. Dr Jose Folch, from the Centre of Food Technology and Research of Aragon, in Zaragoza, northern Spain, led the research along with colleagues from the National Research Institute of Agriculture and Food in Madrid. He said: "The delivered kid was genetically identical to the bucardo. In species such as bucardo, cloning is the only possibility to avoid its complete disappearance." Pyrenean ibex, which have distinctive curved horns, were once common in northern Spain and in the French Pyrenees, but extensive hunting during the 19th century reduced their numbers to fewer than 100 individuals. They were eventually declared protected in 1973, but by 1981 just 30 remained in their last foothold in the Ordesa National Park in the Aragon District of the Pyrenees.

The Last Great Auk The black and white Great Auk was a beautiful bird of bizarre proportions. Its ribbed beak was huge and unwieldy, its legs were too short and its stubby wings were far too small to carry its big body into the air. In these regards, the Great Auk’s clumsy appearance rivals that of the Dodo. And that’s not the only thing these two birds have in common. The Icelandic fishermen Sigurðr Islefsson, Jón Brandsson and Ketil Ketilsson saw the last living Great Auks, in June 1844. Almost tangible, but not quite. Life If Great Auks looked out of place on land, this is because they belonged in the water, where they caught fish and crustaceans. The flippers of Penguins have a similar shape as the wings of the Great Auk. Great Auks could be found throughout the subarctic Atlantic ocean. Great Auks lived in large breeding colonies. Not much is known about the way the Great Auk raised their chicks. Extinction There is evidence that Great Auks were already hunted in prehistoric times. A Great Auk egg.