Rolls-Royce-powered Aeroboat S6 brings speed and luxury. Boat building is as much an art as a science – maybe more. 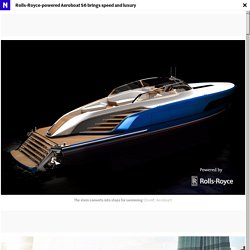 So it's no surprise that Aeroboat chose the Saatchi Gallery in London to unveil its S6 yacht. Designed by British-based Claydon Reeves design studio and BMT Nigel Gee, the 65-ft (20-m) aluminum and carbon-composite yacht combines a number of luxury features as well as a pair of Rolls-Royce MTU V10 2000 M96 engines for a top speed of 48 knots (55 mph, 88 km/h) that makes it just as much a speedboat as pleasure barge. At first glance, the Aeroboat S6 looks like a fat cigarette boat until you realize its scale. In fact, its aerodynamic hull with its bluff nose, sweeping transom, and recessed lights and mooring ports can carry up to 12 passengers and sleeps four in a surprising degree of comfort.

The curving superstructure is dominated by the teardrop cockpit available open, or as a hardtop or fixed bimini for sightseeing and al fresco dining using a concealed table. Source: Aeroboat. World's first all-electric autonomous container ship to set sail in 2018. While self-driving cars are regularly in the news, we haven't heard as much noise on the autonomous shipping front, which could have equally far-reaching ramifications. 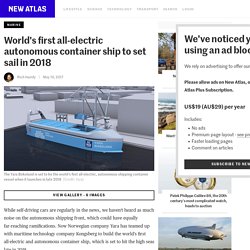 Now Norwegian company Yara has teamed up with maritime technology company Kongsberg to build the world's first all-electric and autonomous container ship, which is set to hit the high seas late in 2018. The hi-tech container ship, named Yara Birkeland, will carry chemicals and fertilizer from Yara's Prosgrunn production plant to the nearby towns of Brevik and Larvik. It will first operate as a manned vessel in 2018, before transitioning to remote operation in 2019 and fully autonomous control by 2020. Sunseeker’s ‘Black and White’ Motor Yacht Now Chartering for $101K a Week. Luxury solar yacht is just as spectacular as we anticipated. "We can confirm that we do have an unlimited range only powered by the solar roof, during a normal sunny day and a cruising speed between 6-7 kn" Egon Faiss, Marketing Director from the Ned Ship told New Atlas. 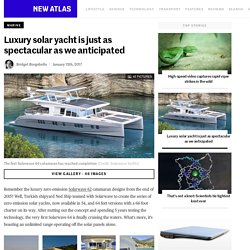 Solarwave 64 combines a carbon composite hull design from Ned Ship's Dr. Orhan Celikkol and Michael Köhler's Solar Energy system to create a luxurious 64 foot catamaran that's capable of operating with zero emissions. What It's Really Like to Sail Through Heavy Seas. Even with drones and self-driving cars, it's still crucial to be able to travel by sea. 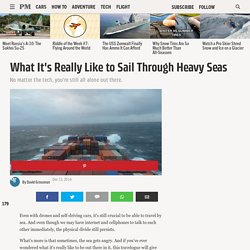 And even though we may have internet and cellphones to talk to each other immediately, the physical divide still persists. What's more is that sometimes, the sea gets angry. And if you've ever wondered what it's really like to be out there in it, this travelogue will give you a window into the storm. Advertisement - Continue Reading Below JeffHK, who regularly makes videos about sailing, wanted to show off heavy weather. 5 Tough Little Lifeboats That Just Refuse to Capsize. Modular inflatable electric surfboard jets to 29 mph. Royal Navy's self-driving speedboat takes to the Thames. The Royal Navy's latest seagoing robot took to the waves today in the heart of London. 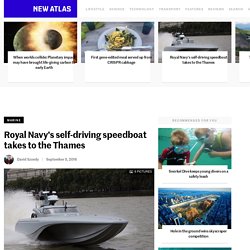 Accompanied by patrol boat HMS Archer, the unmanned 32-ft (9.7-m) Maritime Autonomy Surface Testbed (MAST) autonomous speedboat negotiated traffic on the Thames estuary between Tower Bridge and Westminster bridge as part of the run-up to the Unmanned Warrior naval exercises. Today's trial marks the public debut of the unmanned surface vessel (USV). It is based on the Bladerunner hull which sees a deep-vee catamaran shape with a foil between the hulls to allow for increased stability while planing at high speed.

It's being developed by Portchester-based ASV Ltd as a testbed for new technologies, as well as for studying new tactics for robotic craft. The MAST is not designed to carry weapons, but rather for surveillance and reconnaissance roles. Building A Cruise Ship. Orsos Island - the smallest personal floating island yet in a fast growing market. Tetrahedron super yacht appears to fly above the surface of the sea. Feb 22, 2016. 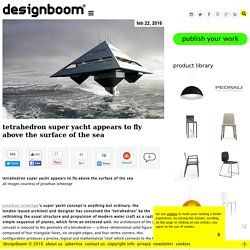 The Herculean Effort Required to Pull the Baltic Ace Up From the Bottom of the Sea. When the Baltic Ace hit another container ship in December of 2012 and promptly capsized and sunk it was carrying 1,400 cars and over 100,000 gallons of oil. 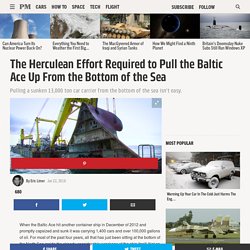 For most of the past four years, all that has just been sitting at the bottom of the North Sea inside the already considerable wreckage of the ship itself. Not an easy mess to clean up. Advertisement - Continue Reading Below The process was far from simple. First, crews drilled into the wreck to heat the then-solid oil and drain it, before slicing the ship itself into eight seperate pieces with a wire and removing each one seperately. The removal process was completed in late 2015, leaving virtually nothing left on the sea bed and generating thousands of tons of recyclable salvage. Source: SMIT Salvage. Cnet. These Mesmerizing Videos of Ships Going Through Storms Will Turn You Into a Landlubber for Life. A fishing vessels does battle with the Atlantic off the coast of Ireland. 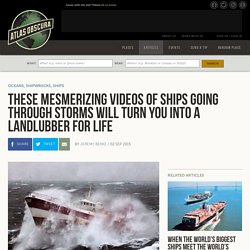 (Photo: UK Ministry of Defense/Flickr) "How do men act on a sinking ship? Do they hold each other? Electric boat meets lounge chair on Chilli Island. Designed to deliver some of the on-water fun of a small boat without the work and hassle, the Chilli Island watercraft navigates the crisp, blue water like a motorized lounge chair. 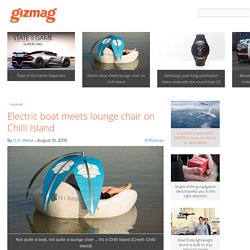 This small electric vessel has everything you need to enjoy a sunny day on the (not so) high seas with your favorite companion. At first glance, the Chilli Island looks more like a pool chair or towable than a powered watercraft, but the included Torqeedo electric motor puts it in the latter category. Both 0.5- and 1-kW motor options are available, providing up to six hours of runtime with power from a 300 Ah pair of AGM deep cycle batteries. Vienna-based Chilli Island GmbH fancies its namesake watercraft an alternative to other lightweight watercraft, such as pedal boats. 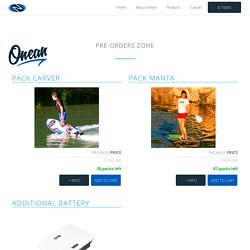 German-built Lampuga board claimed to be "world's fastest electric surfboard" Once the domain of a select few products like the Powerski Jetboard, the powered surfboard market has really grown over the past year. During that time, we've seen the underwhelming Waterwolf, the promising, multi-personality Aquila, and the Radinn surfboards. The German-designed Lampuga joins the crowd, bringing with it speeds up to 34 mph (55 km/h) and claims of being the world's fastest e-surfboard.

View all Electric surfboards tend to be a big deal at the Düsseldorf boat show, with multiple models on display across several halls. Carl Turner Architects designs open source Floating House. UK-based Carl Turner Architects recently unveiled a novel new home designed to address the issue of flooding and unlock new building space on underused waterways. The firm plans to make the blueprints for Floating House available for free download via the Paperhouses open source architecture project, thus enabling anyone with the means to either construct their own Floating House or hire a professional to build it for them.

View all In its default configuration, Floating House will rest upon a 20 x 7 m (65 x 22 ft) buoyant concrete hull, and can float atop the water like a non-movable houseboat. In addition, if it is to be located on a flood-plain, the home can also rest atop stilts or on a non-floating flood-resistant thick concrete base. The design shows the two story home's living quarters contained within a 14 x 5 m (45 x 16 ft) cross-laminated timber frame, with a thick layer of insulation and triple-glazed windows. Sources: Carl Turner Architects, Paperhouses Share. New navigation module to help future freighters act as their own sails. The hull of the cargo ship Vindskip acts as a large wing sail (Image: Lade AS) In 2013, Norway's Lade AS unveiled designs for Vindskip, a "hybrid" merchant ship which aims to harness the wind courtesy of a specially-shaped hull, in the process taking the burden off of its natural-gas powered engines and saving fuel.

The high-flying Quadrofoil hydrofoil is ready for production. Preview: The Boats, Crew and Route of the Around-the-World Volvo Ocean Race. When the hardest sporting events in the world are discussed, the usual suspects like climbing Everest or the Tour de France are mentioned, feats of superhuman endurance, strength and harsh conditions. A tour of the ballistic missile submarine Redoutable (photos) Project MUNIN aims to make robot ships a reality. Earlier this year Rolls Royce outlined a future where giant robot cargo vessels ply the world's sea lanes without a human crew on board.

That scenario is now coming closer to reality as the EU project MUNIN looks into the feasibility of robotic freighters and the hurdles they must overcome. Project MUNIN is made up of eight partner companies led by Germany’s Fraunhofer institute and coordinated in Sweden. High-tech watercraft transforms from monohull, to catamaran, to trimaran, to hydrofoil. TOP 6 SHIPS IN STORM INCREDIBLE VIDEO. What has happened to the tsunami debris from Japan? The amount of debris in the ocean is growing exponentially, becoming more and more hazardous and harmful to marine life and therefore also to our ocean food source.

Measuring and tracking the movements of such debris are still in their infancy. Iprc.soest.hawaii.edu/news/marine_and_tsunami_debris/2014/14_02_Maximenko_fisherman.pdf. Ocean debris leads the way for castaway fisherman. Supiore electric luxury tender offers a quiet float. Rolls Royce to design ship that carries fish as passengers. Zapata's outrageous, US$6,600 Flyboard - Aquaman meets Iron Man. PlanetSolar. This boat circled the globe on sun power alone. Word association time! I say “100-ton boat,” you say probably anything but “needs no fuel whatsoever.” Well, this time you’d be wrong, because the catamaran Tûranor PlanetSolar (which I propose we rename Trusty the Good Ship Sunshine, because a name that means “the power of the sun” in Elvish is too geeky even for me) runs entirely on sunlight.