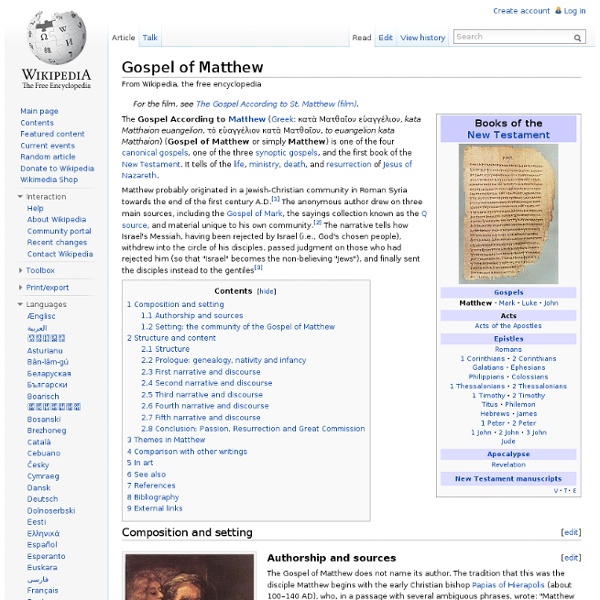 The Gospel According to Matthew (Greek: κατὰ Ματθαῖον εὐαγγέλιον, kata Matthaion euangelion, τὸ εὐαγγέλιον κατὰ Ματθαῖον, to euangelion kata Matthaion) (Gospel of Matthew or simply Matthew) is one of the four canonical gospels, one of the three synoptic gospels, and the first book of the New Testament. The narrative tells how the Messiah, Jesus, rejected by Israel, finally sends the disciples to preach his Gospel to the whole world. The Gospel of Matthew is generally believed to have been composed between 70 and 110, with most scholars preferring the period 80–90; a pre-70 date remains a minority view, but has been strongly supported. The anonymous author was probably a highly educated Jew, intimately familiar with the technical aspects of Jewish law, and the disciple Matthew was probably honored within his circle. Composition and setting[edit] Evangelist Mathäus und der Engel by Rembrandt Composition[edit] Setting[edit] Structure and content[edit] Structure[edit] Theology[edit]

Gospel of John The Gospel of John (also referred to as the Gospel According to John, the Fourth Gospel, or simply John) is one of the four canonical gospels in the Christian Bible. In the New Testament it traditionally appears fourth, after the synoptic gospels of Matthew, Mark and Luke. John begins with the witness and affirmation of John the Baptist and concludes with the death, burial, resurrection, and post-resurrection appearances of Jesus. Chapter 21 states that the book derives from the testimony of the "disciple whom Jesus loved" and early church tradition identified him as John the Apostle, one of Jesus' Twelve Apostles. Raymond E. Composition[edit] Authorship[edit] The gospel identifies its author as "the disciple whom Jesus loved." The earliest manuscripts to contain the beginning of the gospel (Papyrus 66 and Papyrus 75), dating from around the year 200, entitle the gospel "The Gospel according to John". Sources[edit] Order of material[edit] Signs Gospel[edit] Discourses[edit] Inspiration[edit]

The Corinthians in Corinthians Figure Analysis The Corinthians sure get lots of screen time in the Bible, but just who were they? And why does Paul spend so much time writing letters to their little neck of the woods? The Corinth of Old Ancient Corinth was a lovely little town, which was located in the southern part of Greece on the Isthmus of Corinth. See, Corinth was pretty cosmopolitan at the time (for a place that didn't have flushing toilets, that is): Corinth was home to major seaports, which meant its exports of bronze and terra cotta always sold well.It was a major manufacturing and commercial hub of the ancient world. Paul's Arrival in Greece So Paul hits Corinth and establishes a church pretty quickly. Not quite. Sin's Really Got a Hold on Them The Corinthians get a bad wrap for being a bunch of ancient sinners and sex freaks. "Fornicators, idolaters, adulterers, male prostitutes, sodomites, thieves, the greedy, drunkards, revilers, robbers […] this is what some of you used to be" (1 Corinthians 6:9-11). Wrong:

Bible History & Archaeology Published by the Biblical Archaeology Society | Biblical Archaeology Review 50 Kick-Ass Websites You Need to Know About It's time to update the entries in your browser's links toolbar. But with recent estimates putting the size of the internet at well more than 100 million distinct websites, it's getting harder and harder to get a handle on all the great stuff that's out there. That's why we've compiled this list. And unlike some lists you may have seen, which try to name the very "best" websites, but end up just telling you a lot of stuff you already know, we've chosen instead to highlight 50 of our favorite sites that fly under most people's radar. Think of it as the Maximum PC blog roll (remember those?). You might have heard of some of these sites, but we'll bet you haven't heard of all them. Demoscene.tv See What Can Be Done with 4 Kilobytes If you’re any kind of nerd at all, you probably know about the demoscene, where talented programmers create complex videos rendered in real-time, stored in incredibly small files. lite.Facebook.com Clutter-Free Social Networking You can admit it. Soyouwanna.com

26 Life Changing Lessons to Learn from Mahatma Gandhi Mahatma Gandhi, one of the many beautiful souls that has inspired and continues to inspire so many of us taught me so many valuable and life changing lessons. And in today’s post, I have gathered some of his most inspiring quotes and compiled them into the 26 Life Changing Lessons to Learn from Mahatma Gandhi. Enjoy! 1. “An ounce of practice is worth more than tons of preaching.” “It is the quality of our work which will please God and not the quantity.” 2. “There is more to life than simply increasing its speed.” 3. “If I had no sense of humor, I would long ago have committed suicide.” 4. “It’s the action, not the fruit of the action, that’s important. 5. “Earth provides enough to satisfy every man’s needs, but not every man’s greed.” 6. “God has no religion.” “I like your Christ, I do not like your Christians. “I believe in the fundamental Truth of all the great religions of the world. 7. “Prayer is not asking. “Prayer is the key of the morning and the bolt of the evening.” 8. 9. 10. 11. 12.

The Gnosis Archive: Resources on Gnosticism and Gnostic Tradition What is Gnosticism? Many visitors have requested some basic introductory material explaining Gnosticism. To meet this need we offer these "places to start": two short articles, The Gnostic World View: A Brief Summary of Gnosticism and What is a Gnostic?; and an audio lectures (mp3 format) on the Gnostic concept of Christ: The Misunderstood Redeemer. Meditations Take a moment to reflect on a brief meditation and reading from the Gnostic scriptures, selected from this week's Gnostic liturgy. The Gnostic Society Library Visit the Gnostic Society Library, a comprehensive library of Gnostic scriptures, which includies the complete Nag Hammadi library of Gnostic texts and other ancient writings and documents relating to Gnostic tradition. Documentary films: The Lost Gospels—a ninety minute long BBC documentary (first released in 2008). Nag Hammadi Library collection updated: The Nag Hammadi Library collection received a major update in May 2015. Gnosis and C. "C.G. C. C. Genesis and Gnosis