Taking to the seas 250 mya, the only thing that ties these marine reptiles to land is the annual laying of their eggs. There are seven species of SEA TURTLE, the largest being the 1300lb Leatherback.

Unlike other sea turtles, the Leatherback's shell is made up of bones contained within leathery skin. Almost all species are in danger in some way, mainly due to modern fishing practices. Sea Turtle Size Chart. First "Glowing" Sea Turtle Found. Yes, this sea turtle is glowing neon green and red. 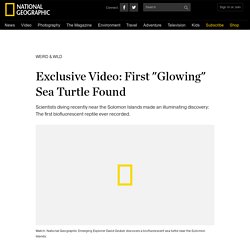 No, it's not radioactive. The critically endangered hawksbill sea turtle is the first reptile scientists have seen exhibiting biofluorescence—the ability to reflect the blue light hitting a surface and re-emit it as a different color. The most common colors are green, red, and orange. Biofluorescence is different from bioluminescence, in which animals either produce their own light through a series of chemical reactions, or host bacteria that give off light.

Corals fluoresce, and recent research has found the ability in a number of fish, sharks, rays, tiny crustaceans called copepods, and mantis shrimp. "I've been [studying turtles] for a long time and I don't think anyone's ever seen this," says Alexander Gaos, director of the Eastern Pacific Hawksbill Initiative, who was not involved in the find. On Guard Gruber followed the turtle for a short while, but "after a few moments I let it go because I didn't want to harass it. " Baby Turtle. Dentures-fins for sea turtles. Shark attacked a 25-year-old tortoise and a bit off her front flippers. 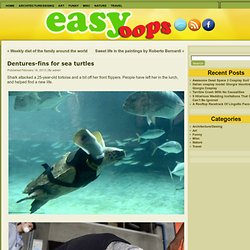 People have left her in the lurch, and helped find a new life. Hotter climate could turn sea turtles all-girl. Out of her shell: Rising temperatures mean more female turtles. 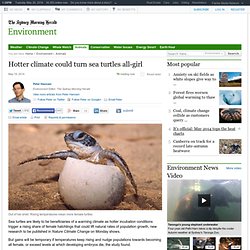 Sea turtles are likely to be beneficiaries of a warming climate as hotter incubation conditions trigger a rising share of female hatchlings that could lift natural rates of population growth, new research to be published in Nature Climate Change on Monday shows. But gains will be temporary if temperatures keep rising and nudge populations towards becoming all female, or exceed levels at which developing embryos die, the study found. It will be end of story without human intervention. Sea Turtle helps Pug get back to shore. 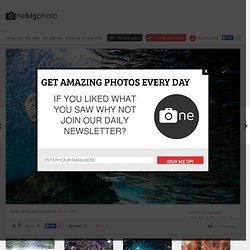 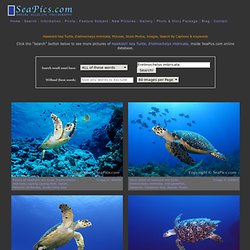 Singular words usually have more success than plurals. Do NOT use punctuation (, .) or quotation marks (' "). Separate each word with a space. Enter words that apply to the type of images you're seeking. Choose one of the following 6 criteria from the adjacent pull-down menu to indicate how those words are to be applied to the search. ALL of these words is like saying the results must have this AND that. This type of search allows you to enter any words, partial words, or series of words. This open vocabulary search may also produce inappropriate matches. Choose number of images per page from the pull-down menu to suit your connection speed or monitor size. Green sea turtle hatchling. Sea Turtle Finds Lost Camera. Albino Baby Sea Turtle. Green Sea Turtles in Bora Bora. Random photo Submit your photo Stumble Thru animal photography, nature photography Tags: bora bora turtle underwater green sea turtles, bora bora by michele westmorland 47 965 views Rating: +6 diver between two tectonic plates, iceland underwater life of poda island, thailand sea lion swim through a tunnel of fish ringed tubularia, the underwater pink flowers Place your ad here Loading... 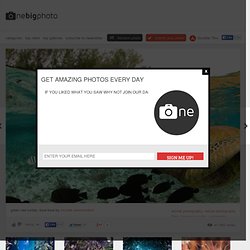 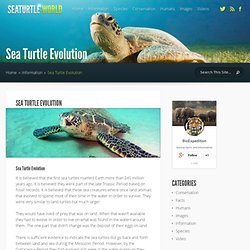 It is believed they were part of the late Triassic Period based on fossil records. It is believed that these sea creatures where once land animals that evolved to spend most of their time in the water in order to survive. They were very similar to land turtles but much larger. They would have lived of prey that was on land. There is sufficient evidence to indicate the sea turtles did go back and forth between land and sea during the Mesozoic Period. It is believed that this significant change in their lifestyle occurred approximately 120 million years ago. Those reptiles that did survive were mainly the ones that took to the water and underwent an evolutionary change that could help them to continue on. Not all species though were successful enough to evolve and to survive. Endangered Sea Turtles Burned In BP Spill Clean-up. A recent Los Angeles Times article confirmed that sea turtles are being burned in the efforts to clean up the British Petroleum oil spill in the Gulf of Mexico. 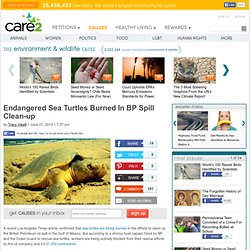 But according to a shrimp boat captain hired by BP and the Coast Guard to rescue sea turtles, workers are being actively blocked from their rescue efforts by the oil company and it’s 21,000 contractors. Shrimp boater Mike Ellis says that BP has shut down the sea turtle operation by preventing boats from getting to the turtles. As detailed in the LA Times story, controlled burns are part of the efforts to contain the oil spill. Sea tutles and other marine life are caught in the booms and the burn area and are burned along with the oil. 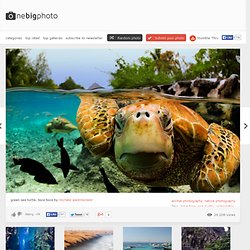