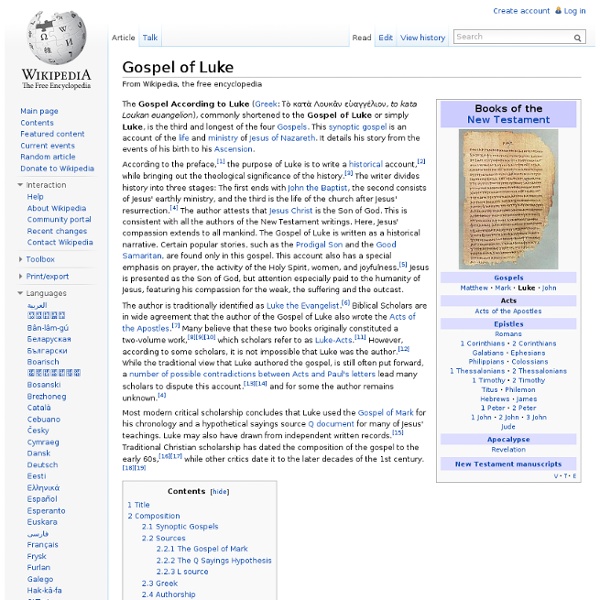 The Gospel According to Luke (Greek: Τὸ κατὰ Λουκᾶν εὐαγγέλιον, to kata Loukan euangelion), commonly shortened to the Gospel of Luke or simply Luke, is the third and longest of the four Gospels. This synoptic gospel is an account of the life and ministry of Jesus of Nazareth. It details his story from the events of his birth to his Ascension. According to the preface,[1] the purpose of Luke is to write an historical account,[2] while bringing out the theological significance of the history.[3] Nevertheless, ancient authors emphasized plausibility rather than truth and mixed intentional fiction in with their biography; the claim that the evangelist wrote with historical intentions does not guarantee the preservation of historical facts. Most modern critical scholarship concludes that Luke used the Gospel of Mark for his chronology and a hypothetical sayings source Q document for many of Jesus's teachings. Title[edit] Composition[edit] Synoptic Gospels[edit] Sources[edit] L source[edit]

Gospel of John The Gospel of John (also referred to as the Gospel According to John, the Fourth Gospel, or simply John) is one of the four canonical gospels in the Christian Bible. In the New Testament it traditionally appears fourth, after the synoptic gospels of Matthew, Mark and Luke. John begins with the witness and affirmation of John the Baptist and concludes with the death, burial, resurrection, and post-resurrection appearances of Jesus. Chapter 21 states that the book derives from the testimony of the "disciple whom Jesus loved" and early church tradition identified him as John the Apostle, one of Jesus' Twelve Apostles. The gospel is closely related in style and content to the three surviving Epistles of John such that commentators treat the four books,[1] along with the Book of Revelation, as a single body of Johannine literature. According to most modern scholars, however, the apostle John was not the author of any of these books.[2] Raymond E. Composition[edit] Authorship[edit] Sources[edit]

The Corinthians in Corinthians Figure Analysis The Corinthians sure get lots of screen time in the Bible, but just who were they? And why does Paul spend so much time writing letters to their little neck of the woods? The Corinth of Old Ancient Corinth was a lovely little town, which was located in the southern part of Greece on the Isthmus of Corinth. The city was surrounded by water and was snuggled up about halfway between Athens and Sparta. See, Corinth was pretty cosmopolitan at the time (for a place that didn't have flushing toilets, that is): Corinth was home to major seaports, which meant its exports of bronze and terra cotta always sold well.It was a major manufacturing and commercial hub of the ancient world. Paul's Arrival in Greece So Paul hits Corinth and establishes a church pretty quickly. Not quite. Sin's Really Got a Hold on Them The Corinthians get a bad wrap for being a bunch of ancient sinners and sex freaks. What terrible, awful, no good Christians! Were They Really That Bad? Head of the Social Class

Gospel A gospel is an account that describes the life of Jesus of Nazareth . The most widely known examples are the four canonical gospels of Matthew , Mark , Luke , and John , but the term is also used to refer to the apocryphal gospels , the non-canonical gospels , the Jewish-Christian gospels and the gnostic gospels . Christianity traditionally places a high value on the four canonical gospels, which it considers to be a revelation from God and central to its belief system. [ 1 ] Christians teach that the four canonical gospels are an accurate and authoritative representation of the life of Jesus, [ 2 ] but many scholars agree that not everything contained in the gospels is historically reliable. [ 3 ] [ 4 ] [ 5 ] [ 6 ] [ 7 ] [ 8 ] [ 9 ] In Islam the Injil ( Arabic : إنجيل ‎) is the Arabic term for a book given to Jesus. Injil is sometimes translated as 'gospel'. This is one of the four Islamic holy books that the Qur'an reports as having been revealed by God . Etymology [ edit ]

Marcan priority According to the hypothesis of Markan priority, the Gospel of Mark was written first and then used as a source for the Gospels of Matthew and Luke. Markan priority is the hypothesis that the Gospel of Mark was the first-written of the three Synoptic Gospels and was used as a source by the other two, Matthew and Luke. This hypothesis is a central one in discussion of the Synoptic Problem, the question of the documentary relationship among these three Gospels. Markan priority has been accepted by most scholars since the late nineteenth century and forms the foundation for the widely accepted two-source theory, although a number of scholars support different forms of Markan priority or reject it altogether.[1][2] History[edit] Gottlob Christian Storr. The tradition handed down by the Church Fathers regarded Matthew as the first Gospel written. There was much debate at the time over whether Matthew and Luke used Mark itself or some Proto-Mark (Ur-Mark).[10] In 1899 J. Dependent theories[edit]

Apostle (Christian) The Twelve Apostles are the twelve primary disciples of Jesus Christ, and they were his closest followers and the primary teachers of the gospel message of Jesus. The count of twelve is ambiguous, as described below. Any subsequent teacher who spread the Christian message to a people, country, or nation, may also have been recognized as an apostle to that people. The commissioning of the Twelve Apostles during the ministry of Jesus is recorded in the Synoptic Gospels. After his resurrection, Jesus sent eleven of them (minus Judas Iscariot) by the Great Commission to spread his teachings to all nations, referred to as the Dispersion of the Apostles. There is also an Eastern Christian tradition derived from the Gospel of Luke of Seventy Apostles. The period of Early Christianity during the lifetimes of the apostles is called the Apostolic Age.[1] In the 2nd century, association with the apostles was esteemed as evidence of authority and such churches are known as Apostolic Sees.

Synoptic Gospels The calming of the storm is similarly recounted in each of the three synoptic gospels, but not in John. The gospels of Matthew, Mark, and Luke are referred to as the Synoptic Gospels because they include many of the same stories, often in a similar sequence and in similar wording. They stand in contrast to John, whose content is comparatively distinct. This strong parallelism among the three gospels in content, arrangement, and specific language is widely attributed to literary interdependence.[2] The question of the precise nature of their literary relationship—the "synoptic problem"—has been a topic of lively debate for centuries and has been described as "the most fascinating literary enigma of all time". Structure[edit] Almost all of Mark's content is found in Matthew, and much of Mark is similarly found in Luke. Common features[edit] In content and in wording, though, the synoptics diverge widely from John but have a great deal in common with each other. The triple tradition[edit]