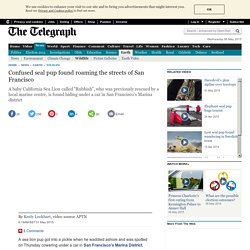 His carers, who decided to name him Rubbish, was released after gaining 17 pounds. Rubbish the seal being treated at the the Marine Mammal Center However it seems the little pup is in need of more TLC, after rescuers found he has lost all the weight he gained during his last visit. Vets now plan to test Rubbish for any underlying health problems that have caused him to venture back on shore. Affamés, les lions de mer envahissent la Californie. Un lion de mer a été sauvé par deux policiers à Fort Bragg L'image de Rubbish, un petit lion de mer retrouvé agonisant sur un trottoir de San Francisco, a fait le tour du monde. 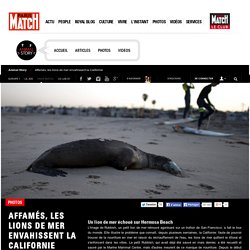 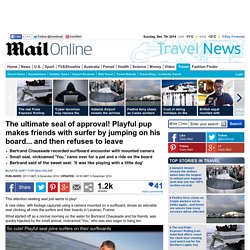 Environmental changes stress West Coast sea lions - Northwest Fisheries Science Center. Three seals found dead on Porthmadog beach including one beheaded. Three seals have found dead on beach over the last three weeks, one of which had been beheaded. 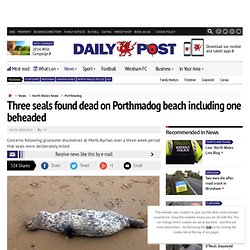 A member of the public, who does not wish to be named, uncovered the gruesome discoveries three weeks in a row at Morfa Bychan near Porthmadog, which is also known as Black Rock Sands. The person who found the dead creatures on the beach, with the most recent discovery being made just this week, believes that the seals were deliberately killed — though no eyewitnesses to any such incident have come forward yet. The person added: “There is no reason why anyone would want to kill such a creature. But judging by the remains of these poor animals, they can’t be accidental.

“One of them had even been beheaded, which is terrible really. “Fisherman are known to think that seals get in their way when netters, but I can’t see that killing them is in anyway justified.” Baby Sea Lion Rides a Turtle in Galapagos! 4 000 penguins threatened after diesel spill. Cape Town – A fishing trawler that spilled 10 000 liters of diesel after it collided with rocks near the Stony Point Penguin colony has placed the lives of 4 000 penguins in jeopardy. 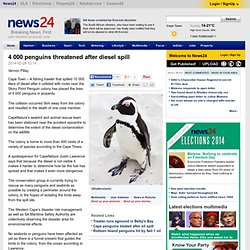 Un phoque se relaxe sur la plage de Calais. Hatem Yavuz is the King of Seal Killers. Hatem Yavuz from Turkey buys the pelts of every one of the 86,000 seal pups that are slaughtered every year in Namibia. 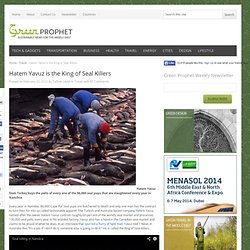 Every year in Namibia, 86,000 Cape Fur Seal pups are butchered to death and only one man has the contract to turn their fur into so-called fashionable apparel. The Turkish and Australia based company Hatem Yavuz named after the owner Hatem Yavuz controls roughly 60 percent of the world’s seal market and processes 130,000 seal pelts every year in his Istanbul factory. Yavuz also has a hand in the Canadian seal market and claims to be proud of what he does. In an interview that spurred a flurry of hate mail, Yavuz told 7 News in Australia that “it’s a job. If I don’t do it, someone else is going to do it.” Keith the seal could be SHOT DEAD under legal loophole. A hungry grey seal which became a national celebrity after swimming 80 miles inland up a river could be killed after a legal loophole means landowners or commercial fisherman with the correct weapon are free to SHOOT it dead. 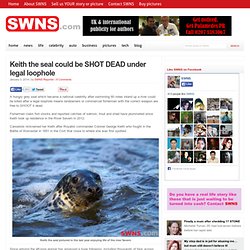 Fishermen claim fish stocks and reported catches of salmon, trout and shad have plummeted since Keith took up residence in the River Severn in 2012. Canoeists nicknamed her Keith after Royalist commander Colonel George Keith who fought in the Battle of Worcester in 1651 in the Civil War close to where she was first spotted. Keith the seal pictured in the last year enjoying life of the river Severn Since arriving the 4ft-long animal has amassed a huge following, including thousands of fans across the world who regularly update her TWO Facebook pages and Twitter account.

But despite many loving her, anglers have been complaining she is eating river’s fish stocks and putting their livelihoods at risk. Final wave as rescued seal returns to the ocean. Majella O'Sullivan – Published 20 January 2014 02:30 AM Lena, a grey seal, took her first tentative steps back into the Atlantic from Cuan Pier in Ventry, Co Kerry, three months after she had been discovered by three brothers on nearby Clogher Strand. 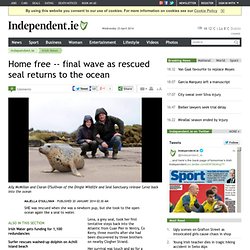 Her survival was touch and go for a while. Being so young and having being separated from her mother when she was only a few days old, she fell foul of the flu and a few infections on her road to recovery. She was one of 30 seals being cared for by the Dingle Wildlife and Seal Sanctuary, most of which are casualties of the recent storms. Sanctuary manager Ally McMillan said since Christmas they have rescued seals from every coastal county. "It's been one of the worst seasons and what we've rescued since Christmas this year is what we'd normally deal with between October and January," she told the Irish Independent. The Seal Army - Photos du journal.