On, In, and below the Water and the Sea

Killer whales form killer friendships, new drone footage suggests. Sea urchin population soars 10,000% in five years, devastating US coastline. Tens of millions of voracious purple sea urchins that have already chomped their way through towering underwater kelp forests in California are spreading north to Oregon, sending the delicate marine ecosystem off the shore into such disarray that other critical species are starving to death. 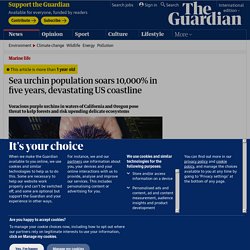 Fossil 'conga lines' reveal origins of animal swarms. Oceans on Nautilus: Lessons for the Return of Great White Sharks. On an October day in 1849, a young writer packed up his notebooks, piled into a horse-drawn carriage, and left western Massachusetts for the outer edge of a sweep of sand known as Cape Cod. 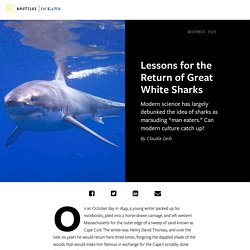 The writer was Henry David Thoreau, and over the next six years he would return here three times, forgoing the dappled shade of the woods that would make him famous in exchange for the Cape’s scrubby dune plants, empty beaches, and endless sky. In his book Cape Cod, Thoreau would go on to describe miles of undomesticated coast at the mercy of the sea, stunning in its mercurial moods and stark beauty.

Shark stomach study reveals surprising diet with bottom-feeding habits. Scientists in Australia have delved into the dining habits of juvenile great white sharks and discovered a humble diet that belies their image as a fearsome predator. 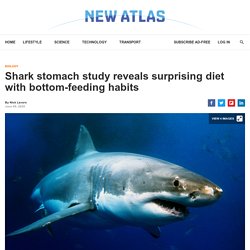 After examining the stomach contents of great white sharks captured off the coast of New South Wales, the scientists were surprised to discover bottom-dwelling creatures made up a decent portion of their diets, shedding further light on how and where they spend their time. The team described the project as the first-ever detailed study of the diets of great white sharks, with the researchers analyzing the stomach contents of 40 deceased juveniles that were collected through protective nets off the eastern coast of Australia. Boy, 8, reels in world record tiger shark.

An 8-year-old boy reeled in a fish of a lifetime—a 692-pound tiger shark that was nearly eight times his own weight—and it will be a smallfry world record, assuming the International Game Fish Association approves it. 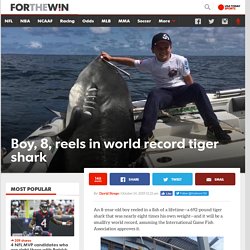 Jayden Millauro, the youngest member of the Port Hacking Game Fishing Club in Sydney, Australia, was fishing with his father, captain Ibby Darbas and two deckhands on the boat Undertaker about 99 miles south of Sydney off the coast of Browns Mountain, according to 9News. Ocearch. Tortoise Gets Wheels After Losing Legs In A Rat Attack. An Octopus Changing Colors While She Dreams Is The Most Mesmerizing Thing. A tractor isn’t something you’d ever expect to see on Speedhunters. 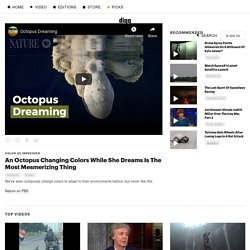 Well, not something I ever did anyway. But when I saw this crazy creation during a visit to Smoke’m Garage recently, I knew I had to take a closer look. 'It can kill you in seconds': the deadly algae on Brittany's beaches. André Ollivro stepped carefully down the grassy banks of an estuary in the bay of Saint-Brieuc, Brittany, not far from his beachfront cabin. 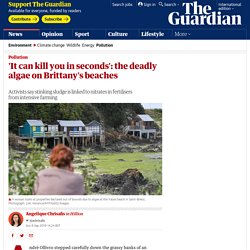 The pungent smell of rotting eggs wafting from decomposing seaweed made him stop and put on his gas mask. It was a strange sight in what is usually a tourist hotspot. “You can’t be too careful,” said the 74-year-old former gas technician, who is leading the fight against what has come to be known as France’s coastal “killer slime”. “When I was 16, I used to bring a boat here with my uncle,” Ollivro said. “In those days, it was all about natural beauty and you didn’t see seaweed piled up. For decades, potentially lethal green algae have amassed in shallow bays on Brittany’s beautiful north-western coast. Killer whale attack. Killer whales (or orcas) are powerful predators capable of killing leopard seals and great white sharks. 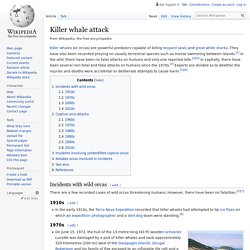 They have also been recorded preying on usually terrestrial species such as moose swimming between islands.[1] In the wild, there have been no fatal attacks on humans and only one reported bite.[2][3] In captivity, there have been several non-fatal and fatal attacks on humans since the 1970s.[4] Experts are divided as to whether the injuries and deaths were accidental or deliberate attempts to cause harm.[5][6] Incidents with wild orcas[edit] There are a few recorded cases of wild orcas threatening humans. However, there have been no fatalities.[2][7] 1910s[edit] In the early 1910s, the Terra Nova Expedition recorded that killer whales had attempted to tip ice floes on which an expedition photographer and a sled dog team were standing.[8] 1970s[edit] 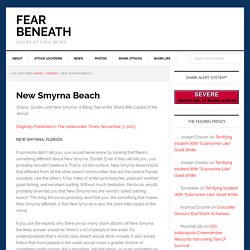 31 Facts About Sharks. Three decades after the Chernobyl disaster—the world’s worst nuclear accident—signs of life are returning to the exclusion zone. 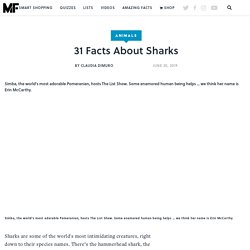 Wild animals in Chernobyl are flourishing within the contaminated region; puppies roaming the area are capturing the hearts of thousands. Tourists who have watched the critically acclaimed HBO series Chernobyl are taking selfies with the ruins. Ancient Giant Isopods Love Eating Alligators, New Study Finds. No One Is Prepared for Hagfish Slime. For a start, it’s not sticky. 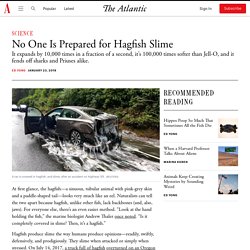 If there wasn’t so damn much of it, you’d be able to wipe it off your skin with ease. Hermit crabs evolved long members to copulate from the comfort of home. Diet, Habitat, & Facts. Sand dollars – Quartz Obsession. When Snails Attack: The Epic Discovery Of An Ecological Phenomenon - Science Sushi. Abalone Armor: Toughest Stuff Theoretically Possible. Centuries of warfare have seen body armor develop from cow hides to Kevlar. Now scientists are using lab experiments and mathematics to discover a stronger bullet-proof solution in the beautiful, helmet homes that seaweed-eating abalones make for themselves. Abalones create a highly ordered brick-like tiled structure for their shells that is the toughest arrangement of tiles theoretically possible, says Marc A.

China's Aircraft Carriers Have a Menace: Jellyfish Swarms. One of China's most intractable enemies doesn’t even have a vertebrae—or a brain. Chinese scientists and engineers are devising new methods to destroy swarms of jellyfish before they can get into naval propulsion systems, halting ships dead in their tracks or overheating their engines. Two Dolphins Died Grisly Decompression Deaths While Battling Squid. Veterinary scientists at the University of Las Palmas de Gran Canaria in Spain recently reported finding two stranded Risso's dolphins that died from decompression sickness, commonly known to divers as "the bends.

" This was quite an odd finding, as dolphins' bodies are well-adapted to avoiding the malady. Decompression sickness is related to the formation of gas bubbles (often nitrogen) in the blood and tissues resulting from a rapid change in pressure, like when ascending from deep to shallow waters. Professor of veterinary pathology Antonio Fernandez and his colleagues discovered the two stranded dolphins along the coast of Spain's Canary Islands. Sciencemag. When the massive tsunami waves of the 2011 eastern Japan earthquake rolled back out to sea, they pulled with them fragments of docks, boats, and buoys that sometimes contained living stowaways. Scientists Discover 'Octlantis,' a Bustling Octopus City. If We Can Get Past the Ickiness, Hagfish Slime May Actually Be Useful to Us. Hagfish are far from cuddly. 'Twilight Zone' Horror Story: Lionfish Prey on Unknown Fish Species. Invasive lionfish in the Caribbean Sea are scarfing down fish species that scientists haven't even discovered yet.

Blood in the water: Four dead, a coast terrified and the birth of modern shark mania. Terrifying Video: Why a Sea Lion Pulled a Little Girl into the Water. Can We Really Eat Invasive Species into Submission? LAS PEÑITAS, Bolivia—Before he’d ever seen a paiche, fish trader Eric Salazar had heard the giant Amazonian fish could grow up to 10 feet long, weigh 400 pounds and eat a man whole. Killer Whales Are Bullies, and Humpbacks Are Bouncers. Great White Sharks Are Being Killed and Eaten by Killer Whales.

The Blood of the Crab. Atlasobscura. Earth - Seals discovered having sex with penguins. This Deep Sea Fisherman Posts His Discoveries on Twitter and OH MY GOD KILL IT WITH FIRE. This Video Is the Stuff of Shark-Induced Nightmares. Lionfish Facts: Frequently Asked Questions About Invasive Lionfish : Lionfish Hunting. Watch A Guy Shoot Invasive Lionfish With A Glock 9mm. Shark group makes unprecedented discovery off Long Island. Photographer Spends 25 Years Trying To Document The Majestic Beauty Of Whales And Dolphins. Earth - Eight reasons why octopuses are the geniuses of the ocean. Drone captures rare moment as whales take down juvenile shark.

Octopus slips out of aquarium tank, crawls across floor, escapes down pipe to ocean. Red Crabs Swarm Like Insects in Incredible Underwater Video. These Beautiful Images of Algae Were the First Photos to Illustrate Any Book. Autonomous underwater vehicle provides new insights into shark behaviour. Deciphering dolphin echolocation - researchers create eerie image of a diver as it may appear in a dolphin's brain.

Sharks Vs Humans - Who Really Kills Who? Beluga Whale Stuns Navy Team With Amazingly Human Chatter (LISTEN) The mystery of the great American lobster boom and how it could go bust. Relatively Interesting Is this footage of an ocean dwelling alien? No. But it's still creepy as hell. - Relatively Interesting. The Octopus Could be the Most-Likely Model of Intelligent Alien Life. True Facts About The CuttleFish. Melbourne Scuba Diver Films Stunning Spider Crab Migration Pyramid. Watch a Manta Ray Give a Diver the Thrill of His Life.